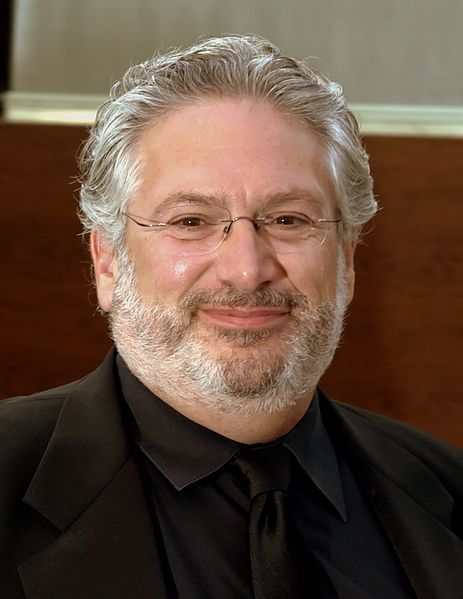 Fierstein was born to Eastern European Jewish immigrants[3] in Brooklyn, New York, the son of Jacqueline Harriet (née Gilbert), a school librarian, and Irving Fierstein, a handkerchief manufacturer.[4] Fierstein is an atheist.[5]

Fierstein occasionally writes columns about gay issues. He was openly gay at a time when very few celebrities were.[6] His careers as a stand-up comic and female impersonator are mostly behind him. Fierstein resides in Ridgefield, Connecticut.[7]

Fierstein's signature gravelly voice is a result of an overdeveloped vestibular fold in his vocal cords, essentially giving him a "double voice" when he speaks. Prior to puberty, Fierstein was a soprano in a professional boys' choir.[8]

The gravel-voiced actor is best known for the play and film Torch Song Trilogy, which he wrote and starred in both Off-Broadway (with a young Matthew Broderick) and on Broadway (with Estelle Getty and Fisher Stevens). The 1982 Broadway production won him two Tony Awards, for Best Play and Best Actor in a Play, two Drama Desk Awards, for Outstanding New Play and Outstanding Actor in a Play, and the Theatre World Award, and the film adaptation earned him an Independent Spirit Award nomination as Best Male Lead.[citation needed]

Fierstein also wrote the book for La Cage aux Folles (1983), winning another Tony Award, this time for Best Book of a Musical, and a Drama Desk nomination for Outstanding Book. Legs Diamond, his 1988 collaboration with Peter Allen, was a critical and commercial failure, closing after 72 previews and 64 performances. His other playwriting credits include Safe Sex, Spookhouse, and Forget Him.[citation needed]

In 2007, Fierstein wrote the book to the musical A Catered Affair in which he also starred. After tryouts at San Diego's Old Globe Theatre in September 2007, it opened on Broadway April 17, 2008 and closed on July 27, 2008. He received a Drama Desk Award nomination for Outstanding Book of a Musical, and the show won the Drama League Award for Distinguished Production of a Musical.[9]

Fierstein wrote the book for the stage musical Newsies, along with Alan Menken (music) and Jack Feldman (lyrics). The musical opened on Broadway in March 2012. Fierstein was nominated for the Tony Award for Book of a Musical.[10]

Fierstein wrote the book for a stage musical version of the film Kinky Boots with music and lyrics by Cyndi Lauper. After a fall 2012 run at the Bank of America Theatre in Chicago[11] it opened at the Al Hirschfeld Theatre on Broadway in April 2013. The musical was nominated for thirteen 2013 Tony Awards[12] and won six, including best musical.[13]

His play, Casa Valentina was produced on Broadway by the Manhattan Theatre Club at the Samuel J. Friedman Theatre. The play opened in April 2014 and closed in June 2014. It was directed by Joe Mantello, with a cast that featured Patrick Page as George/Valentina, John Cullum and Mare Winningham.[14]

Fierstein wrote the teleplay for The Wiz Live! NBC TV broadcast on December 3, 2015, featuring Stephanie Mills, as Aunt Em, Queen Latifah as The Wiz and David Alan Grier as the Lion. The teleplay is an adaptation of The Wiz Broadway production which ran from October 1974 until January 1979.[15]

As one of the first openly gay celebrities in the United States, Fierstein helped make gay and lesbian life into viable subjects for contemporary drama "with no apologies and no climactic suicides".[6]

Fierstein made his acting debut at La MaMa, E.T.C. in Andy Warhol's only play, Pork. Fierstein continued to appear at La MaMa and other venues but also, having some aspirations to become a painter, enrolled at the Pratt Institute in Brooklyn. He received a Bachelor of Fine Arts (BFA) from Pratt in 1973. Fierstein appeared three times in "The Haunted Host" by Robert Patrick: in Boston in 1975, and at La MaMa and then Off-Broadway in 1991. In addition to Torch Song Trilogy, La Cage aux Folles and A Catered Affair, Fierstein's Broadway acting credits include playing the mother, Edna Turnblad in Hairspray (2002), for which he won a Tony Award for Best Leading Actor in a Musical. He later replaced Alfred Molina as Tevye in the 2004 revival of Fiddler on the Roof.

Besides his leading role in the film version of Torch Song Trilogy co-starring Matthew Broderick and Anne Bancroft, Fierstein's film roles include Woody Allen's Bullets over Broadway, Robin Williams's character's makeup-artist brother in Mrs. Doubtfire, and Merv Green in Death to Smoochy, in addition to parts in Garbo Talks, Duplex, Kull the Conqueror, and Independence Day. He narrated the documentary The Times of Harvey Milk, for which he won a News & Documentary Emmy Award. He also voiced the role of Yao in Disney's animated feature Mulan, a role he later reprised for the video game Kingdom Hearts II and the direct-to-DVD sequel Mulan II.

On television, Fierstein was featured as the voice of Karl, Homer Simpson's assistant, in the "Simpson and Delilah" episode of The Simpsons and the voice of Elmer in the 1999 HBO special based on his children's book The Sissy Duckling, which won the Humanitas Prize for Children's Animation. In 1994, Fierstein became the first openly gay actor to play a principal gay character in a television series when he appeared as fashion designer Dennis Sinclair in the short-lived CBS series Daddy's Girls.[16] Additional credits include Miami Vice, Murder, She Wrote, the Showtime television movie Common Ground (which he also wrote), and Cheers, which earned him an Emmy Award nomination for Outstanding Supporting Actor in a Comedy Series. He sang a tribute to Katie Couric on Today on May 31, 2006, her last day as anchor. He appeared as Heat Miser in the live-action remake of The Year Without a Santa Claus in December 2006. More recent television performances include an episode of Family Guy, in which he played an overweight, chainsmoking mother and an episode of the second season of the series Nurse Jackie in which he played a man whose husband is dying. He also gave the voice-over for Lily in the "Last Cigarette Ever" episode of How I Met Your Mother when she gets a sore throat due to smoking.

Fierstein returned to the theatre when he reprised the role of Tevye, replacing an injured Chaim Topol, in the national tour of Fiddler on the Roof starting in December 2009.[17] On February 15, 2011, he replaced Douglas Hodge as Albin/Zaza in the Broadway revival of La Cage aux Folles playing opposite Jeffrey Tambor who plays Georges,[18] although days later Tambor pulled out, which the producers have stated was due to "complications from a recent hip surgery"; Christopher Sieber quickly replaced Tambor.[19] The show closed on May 1, 2011 due to low box office; it played 433 performances and 15 previews.[20]