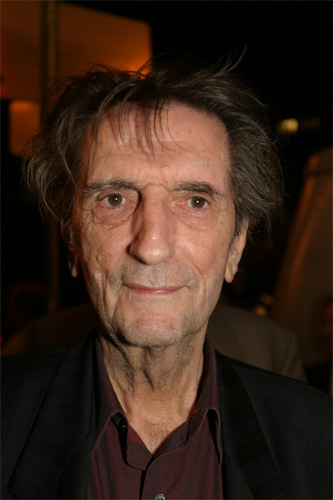 Stanton was born in West Irvine, Kentucky, to Ersel (née Moberly), a cook, and Sheridan Harry Stanton, a tobacco farmer and barber.[2] His parents divorced when Stanton was in high school; both later remarried.[3]

Stanton had two younger brothers, Archie and Ralph, and a younger half-brother, Stanley McKnight. His family had a musical background. Stanton attended Lafayette High School[3] and the University of Kentucky in Lexington where he performed at the Guignol Theatre under the direction of British theater director Wallace Briggs,[4] and studied journalism and radio arts. "I could have been a writer," he told an interviewer for a 2011 documentary, Harry Dean Stanton: Crossing Mulholland, in which he sings and plays the harmonica.[5] "I had to decide if I wanted to be a singer or an actor. I was always singing. I thought if I could be an actor, I could do all of it." Briggs encouraged him to leave the university and become an actor. He studied at the Pasadena Playhouse in Pasadena, California, where his classmates included his friends Tyler MacDuff and Dana Andrews.[6]

During World War II, Stanton served in the United States Navy, including a stint as a cook aboard the USS LST-970, a tank landing ship, during the Battle of Okinawa.[7][8]

Stanton appeared in indie and cult films (Two-Lane Blacktop, Cockfighter, Escape from New York, Repo Man), as well as many mainstream Hollywood productions, including Cool Hand Luke, The Godfather Part II, Alien, Red Dawn, Alpha Dog, Pretty in Pink, Stephen King's Christine, and The Green Mile. He was a favorite actor of the directors Sam Peckinpah, John Milius, David Lynch, and Monte Hellman, and was also close friends with Francis Ford Coppola and Jack Nicholson. He was best man at Nicholson's wedding in 1962.[9]

He made his first television appearance in 1954 in Inner Sanctum, and made his film debut three years later in the Western Tomahawk Trail.[2] He appeared (uncredited) as a complaining BAR man at the beginning of the 1959 film Pork Chop Hill starring Gregory Peck. Then in 1962 he had a very small part in How the West Was Won, portraying one of Charlie Gant's (Eli Wallach) gang. The following year he had a minor role as a poetry-reciting beatnik in The Man from the Diner's Club. Early in his career he took the name Dean Stanton to avoid confusion with the actor Harry Stanton.[2]

His breakthrough part[10] came with the lead role in Wim Wenders' Paris, Texas (1984). Playwright Sam Shepard, who wrote the film's script, had spotted Stanton at a bar in Santa Fe, New Mexico in 1983 while both were attending a film festival in that city. The two fell into conversation. "I was telling him I was sick of the roles I was playing," Stanton recalled in a 1986 interview. "I told him I wanted to play something of some beauty or sensitivity. I had no inkling he was considering me for the lead in his movie."[10] Not long afterward, Shepard phoned him in Los Angeles to offer Stanton the part of the protagonist, Travis,[10] "a role that called for the actor to remain largely silent ... as a lost, broken soul trying to put his life back together and reunite with his estranged family after having vanished years earlier."[11]

Stanton was a favorite of film critic Roger Ebert, who said that "no movie featuring either Harry Dean Stanton or M. Emmet Walsh in a supporting role can be altogether bad." However, Ebert later admitted that Dream a Little Dream (1989), in which Stanton appeared, was a "clear violation" of this rule.[12]

Stanton's television credits were extensive, including eight appearances between 1958 and 1968 on Gunsmoke, four on the network's Rawhide, three on The Untouchables, two on Bonanza, and an episode of The Rifleman. He later had a cameo in Two and a Half Men (having previously appeared with Jon Cryer in Pretty in Pink and with Charlie Sheen in Red Dawn). Beginning in 2006, Stanton featured as Roman Grant, the manipulative leader/prophet of a polygamous sect on the HBO television series Big Love.[9]

Stanton also occasionally toured nightclubs as a singer and guitarist, playing mostly country-inflected cover tunes.[8] He appeared in the Dwight Yoakam music video for "Sorry You Asked",[13] portrayed a cantina owner in a Ry Cooder video for "Get Rhythm",[13] and participated in the video for Bob Dylan's "Dreamin' of You".[13] He worked with a number of musical artists, Dylan, Art Garfunkel, and Kris Kristofferson[14] among them, and played harmonica on The Call's 1989 album Let the Day Begin.[15]

In 2010, Stanton appeared in an episode of the TV series Chuck, reprising his role from the 1984 film Repo Man. In 2011, the Lexington Film League created an annual festival, the Harry Dean Stanton Fest, to honor Stanton in the city where he spent much of his adolescence.[3][nb 1]In 2012, he had brief cameos in The Avengers and in the action comedy Seven Psychopaths. He also appeared in the Arnold Schwarzenegger action film The Last Stand (2013). Stanton was the subject of a 2013 documentary, Harry Dean Stanton: Partly Fiction, directed by Sophie Huber and featuring film clips, interviews with collaborators (including Wenders, Shepard, Kris Kristofferson, and David Lynch), and Stanton's singing.

In 2017, he appeared in Twin Peaks: The Return, a continuation of David Lynch's 1990-91 television series.[2] Stanton reprised his role as Carl Rodd from Twin Peaks: Fire Walk with Me.[2] His last on-screen appearances are as a sheriff in Frank and Ava and a starring role as a 90-year-old atheist in Lucky.

Report a problem
Biography of Harry Dean Stanton at FanPal • 2021