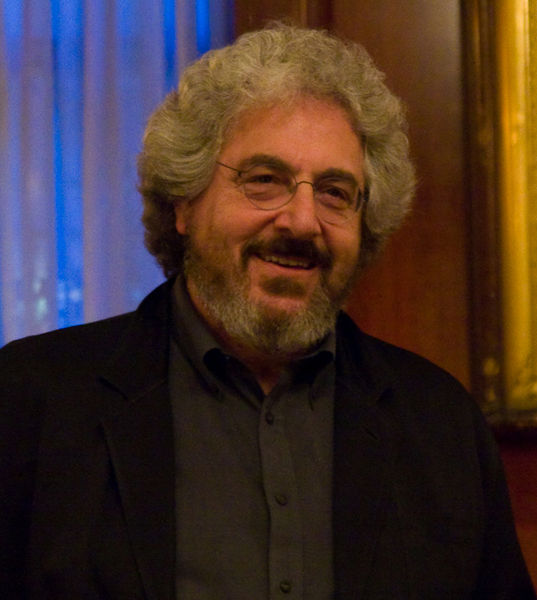 Harold Allen Ramis /ˈreɪmɪs/ (November 21, 1944 - February 24, 2014) was an American actor, director, writer, and comedian. His best-known film acting roles were as Egon Spengler in Ghostbusters (1984) and Ghostbusters II (1989) and Russell Ziskey in Stripes (1981); he also co-wrote those films. As a director, his films include the comedies Caddyshack (1980), National Lampoon's Vacation (1983), Groundhog Day (1993), and Analyze This (1999). Ramis was the original head writer of the television series SCTV, on which he also performed, as well as a co-writer of Groundhog Day and National Lampoon's Animal House (1978). The final film that he wrote, produced, directed and acted in was Year One (2009).

Ramis' films influenced subsequent generations of comedians and comedy writers.[1] Filmmakers including Jay Roach, Jake Kasdan, Adam Sandler, and Peter and Bobby Farrelly have cited his films as among their favorites.[1] Along with Danny Rubin, he won the BAFTA Award for Best Original Screenplay for Groundhog Day.[2]

Afterward, Ramis worked in a mental institution in St. Louis for seven months. He later said of his time working there that it

... prepared me well for when I went out to Hollywood to work with actors. People laugh when I say that, but it was actually very good training. And not just with actors; it was good training for just living in the world. It's knowing how to deal with people who might be reacting in a way that's connected to anxiety or grief or fear or rage. As a director, you're dealing with that constantly with actors. But if I were a businessman, I'd probably be applying those same principles to that line of work.[11]

Ramis began writing parodic plays in college, saying years later, "In my heart, I felt I was a combination of Groucho and Harpo Marx, of Groucho using his wit as a weapon against the upper classes, and of Harpo's antic charm and the fact that he was oddly sexy—he grabs women, pulls their skirts off, and gets away with it".[1] He avoided the Vietnam War military draft by taking methamphetamine to fail his draft physical.[13]

Following his work in St. Louis, Ramis returned to Chicago, where by 1968, he was a substitute teacher at schools serving the inner-city Robert Taylor Homes.[14] He also became associated with the guerrilla television collective TVTV, headed by his college friend Michael Shamberg, and wrote freelance for the Chicago Daily News. "Michael Shamberg, right out of college, had started freelancing for newspapers and got on as a stringer for a local paper, and I thought, 'Well, if Michael can do that, I can do that.' I wrote a spec piece and submitted it to the Chicago Daily News, the Arts & Leisure section, and they started giving me assignments entertainment features."[15] Additionally, Ramis had begun studying and performing with Chicago's Second City improvisational comedy troupe.[16]

Ramis' newspaper writing led to his becoming joke editor at Playboy magazine.[11] "I called ... just cold and said I had written several pieces freelance and did they have any openings. And they happened to have their entry-level job, party jokes editor, open. He liked my stuff and he gave me a stack of jokes that readers had sent in and asked me to rewrite them. I had been in Second City in the workshops already and Michael Shamberg and I had written comedy shows in college".[15] Ramis was eventually promoted to associate editor.[17]

National Lampoon, SCTV, and The Top

After leaving Second City for a time and returning in 1972, having been replaced in the main cast by John Belushi, Ramis worked his way back as Belushi's deadpan foil. In 1974, Belushi brought Ramis and other Second City performers, including Ramis' frequent future collaborator Bill Murray, to New York City to work on The National Lampoon Radio Hour.[1]

In 1984, Ramis executive produced a music/comedy/variety television show called The Top. The Producer was Paul Flattery and the Director was David Jove. Ramis got involved after the mysterious death of his friend Peter Ivers who had hosted Jove's underground show "New Wave Theater." He called Jove and offered to help. Flattery and Jove pitched him the idea for "The Top," and Ramis was instrumental in getting it on the air.

The show was a mixture of live music, videos, and humor.

Performers on the show included Cyndi Lauper, who performed "Girls Just Want to Have Fun" and "True Colors"; the Hollies, who performed "Stop in the Name of Love"; and the Romantics, who performed their two hits at the time, "Talking in Your Sleep" and "What I Like About You."

Guest stars included Rodney Dangerfield, Bill Murray and Dan Aykroyd. Ramis got Chevy Chase to host but, because Ghostbusters filming ran late, he did not make it to the taping. Chase came out dressed as a "punk" of the time and somehow got into a physical altercation with an audience member (also a punk) during the opening monologue. He immediately left the taping. Flattery and Jove carried on with the show.

Ramis then got Andy Kaufman to fill in for Chase and recorded the host segments at a separate, later, session. It was to be the last professional appearance by Andy Kaufman before his death.

The Top aired on Friday, January 27, 1984, at 7 pm. It scored a 7.7% rating and a 14% share. This represented a 28% rating increase and a 27% share increase over KTLA's regularly scheduled Happy Days/Laverne and Shirley.

Ramis left SCTV to pursue a film career and wrote a script with National Lampoon magazine's Douglas Kenney, which eventually became National Lampoon's Animal House. They were later joined by a third collaborator, Chris Miller. The 1978 film followed the struggle between a rowdy college fraternity house and the college dean. The film's humor was raunchy for its time. Animal House "broke all box-office records for comedies" and earned $141 million.[1]

Ramis next co-wrote the comedy Meatballs, starring Bill Murray. The movie was a commercial success and became the first of six film collaborations between Murray and Ramis.[1] His third film and his directorial debut was Caddyshack, which he wrote with Kenney and Brian Doyle-Murray. It starred Chevy Chase, Rodney Dangerfield, Ted Knight, and Bill Murray. Like Ramis's previous two films, Caddyshack was a commercial success.

In 1982, Ramis was attached to direct the film adaptation of the Pulitzer Prize-winning book A Confederacy of Dunces by John Kennedy Toole. The film was to star John Belushi and Richard Pryor, but the project was aborted.[20] In 1984, Ramis collaborated with Dan Aykroyd on the screenplay for Ghostbusters, which became one of the biggest comedy hits of all time, in which he also starred as Dr. Egon Spengler,[21] a role he reprised for the 1989 sequel, Ghostbusters II (which he also co-wrote with Aykroyd). His later film Groundhog Day has been called his "masterpiece".[1]

His films have been noted for attacking "the smugness of institutional life ... with an impish good that is unmistakably American". They are also noted for "Ramis's signature tongue-in-cheek pep talks". Sloppiness and improv were also important aspects of his work. Ramis frequently depicted the qualities of "anger, curiosity, laziness, and woolly idealism" in "a hyper-articulate voice".[1]

Ramis also occasionally acted in supporting roles in acclaimed films that he did not write or direct such as James L. Brooks's Academy Award-winning As Good as It Gets (1997) and Judd Apatow's hit comedy Knocked Up (2007).

In 2004, Ramis turned down the opportunity to direct the Bernie Mac-Ashton Kutcher film Guess Who, then under the working title "The Dinner Party", because he considered it poorly written. That same year, he began filming the low-budget The Ice Harvest, "his first attempt to make a comic film noir". Ramis spent six weeks trying to get the film greenlit because he had difficulty reaching an agreement about stars John Cusack's and Billy Bob Thornton's salaries. The film received mixed reviews. In 2004, Ramis's typical directing fee was $5 million.[1]

In an interview in the documentary American Storytellers, Ramis said he hoped to make a film about Emma Goldman (even pitching Disney with the idea of having Bette Midler star)[22] but that none of the movie studios were interested and that it would have been difficult to raise the funding.

Ramis said in 2009 he planned to make a third Ghostbusters film for release either in mid-2011[23] or for Christmas 2012.[24] The film was eventually made and released in 2016, although directed and co-written by Paul Feig, not Ramis. In this film a bronze bust can be seen of Ramis when Erin Gilbert leaves her office at Columbia University.

Ramis was married twice and fathered four children. On July 2, 1967,[3] he married San Francisco artist Anne Plotkin, with whom he had a daughter, Violet Ramis Stiel.[1][25] Actor and Ghostbusters co-star Bill Murray is Violet's godfather.[1] Ramis and Plotkin separated in 1984 and later divorced. Harold Ramis had a five year relationship with Second City actress Sandra Bogan from 1983 through 1989.[1] In 1985, Ramis had daughter, Mollie Heckerling with director, Amy Heckerling.[26] In 1989, Ramis married Erica Mann, daughter of director Daniel Mann and actress Mary Kathleen Williams.[27] Together they had two sons, Julian Arthur and Daniel Hayes.[3] Although Ramis maintained Humanist beliefs, Erica's Buddhist upbringing was a huge influence on his philosophies for the rest of his life, and he became friends with the Dalai Lama.

Ramis was a Chicago Cubs fan and attended games every year to conduct the seventh-inning stretch at Wrigley Field.[when?][28] His pastimes included fencing, ritual drumming, acoustic guitar, and making hats from felted fleece; additionally, he taught himself skiing by watching skiers on television.[1]

A memorial to Ramis appeared at the "Ghostbusters firehouse".

In May 2010, Ramis contracted an infection that resulted in complications from autoimmune inflammatory vasculitis and lost the ability to walk. After relearning to walk he suffered a relapse of the disease in late 2011.[29]

He died of complications of the disease on February 24, 2014 at his home on Chicago's North Shore, at age 69.[29] A private funeral was held for him two days later with family, friends, and several collaborators in attendance including Dan Aykroyd, Chevy Chase, Eugene Levy, Dave Thomas, David Pasquesi, Andrew Alexander, and the widows of John Belushi and Bernard Sahlins. He is buried at Shalom Memorial Park in Arlington Heights.

Upon Ramis's death, President Barack Obama released a statement, saying: "when we watched his movies—from Animal House and Caddyshack to Ghostbusters and Groundhog Day—we didn't just laugh until it hurt. We questioned authority. We identified with the outsider. We rooted for the underdog. And through it all, we never lost our faith in happy endings."[30] He ended his statement by saying he hoped Ramis "received total consciousness", in reference to a line from Caddyshack.[31]

Ramis and longtime collaborator Bill Murray had a falling out during the filming of Groundhog Day, which Ramis attributed to issues that Murray had with his own life at the time. They did not speak for more than 20 years. Shortly before Ramis's death, Murray, encouraged by his brother Brian Doyle Murray, visited him to make amends with a box of donuts and a police escort, according to Ramis's daughter Violet. At that point, Ramis had lost most of his ability to speak, so Murray did most of the talking over several hours.[32] Murray gave tribute to Ramis at the 86th Academy Awards.[33][34]

Ramis was paid tribute by Stephen Colbert on an episode of his show The Colbert Report. Colbert said that "as a young, bookish man with glasses looking for a role model, I might have picked Harold Ramis". He ended the show by thanking Ramis.[35]

In 2004, Ramis was inducted into the St. Louis Walk of Fame.[36] In 2005, he received the Austin Film Festival's Distinguished Screenwriter Award.[37] In 2010, he received a lifetime achievement award from the Chicago Improv Festival.[citation needed] In 2015, the Writers Guild of America posthumously honored him with their lifetime achievement award, the Laurel Award for Screenwriting Achievement.[38]

In 2016, two years after his death, The Second City founded the Harold Ramis Film School, the first film school to focus solely on film comedy, in his honor.

The 2016 film Ghostbusters, a reboot of the series Ramis co-created and starred in, was posthumously dedicated to him.[39] A bust of his head appears in the film.