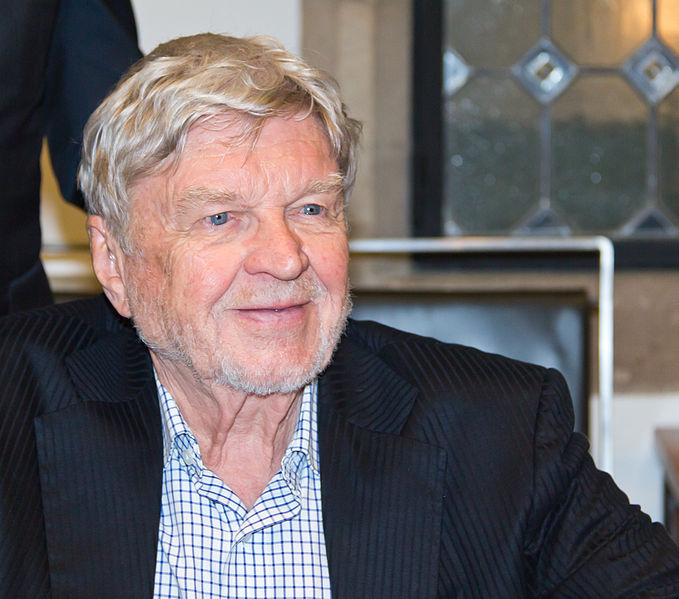 Hardy Krüger (born Franz Eberhard August Krüger[1]; 12 April 1928) is a German actor who appeared in more than 60 films since 1944. Very popular in his own country,[2] Krüger is also known for his appearances in international films like Hatari!, Sundays and Cybele, The Flight of the Phoenix and Barry Lyndon.

Hardy Krüger was born in Wedding, Berlin in 1928. His parents were ardent Nazis. "I was raised to love Hitler", he stated in a 2016 interview.[3] From 1941, he went to an elitist Adolf Hitler School at the Ordensburg Sonthofen. At age 15, Hardy made his film début in a German picture, The Young Eagles, but his acting career was interrupted when he was conscripted into the German Wehrmacht in 1944 at age 16.

In March 1945, Krüger was conscripted into the 38th SS Division Nibelungen where he was drawn into heavy fighting. The 16-year-old Krüger was ordered to eliminate a group of American soldiers. When he refused, he was sentenced to death for cowardice, but another SS officer stopped the order.[4] Krüger described this experience as his break with Nazism. He later served as a messenger for the SS, but he escaped and hid out in Tyrol until the end of the war.[5] He is today a member of the Amadeu Antonio Foundation and frequently speaks out against right-wing extremism and for democracy, also citing his own experiences.[6]

Krüger continued his acting career after the Second World War with small stage roles because he could not afford an acting school. He established himself as a German film star during the 1950s. He appeared in the German version of The Moon Is Blue (1953), directed by Otto Preminger. Krüger looked for international roles, because he found the German Heimatfilm cinema of the 1950s rather shallow.[7] He first came to the attention of English language audiences in the 1957 British war film The One That Got Away, the story of Franz von Werra, the only German prisoner of war to successfully escape from Allied custody and return to Germany.

In 1960, Krüger bought Ngorongoro farm in the then Tanganyika Territory, which he owned for 13 years. Ngorongoro and the area around it served as the setting for the 1962 film Hatari!, a Howard Hawks film, in which Krüger appeared with John Wayne.[8]

Fluent in German, English and French, he has worked in numerous European and American films, including the Oscar-winning Sundays and Cybele (1962), and the original 1965 version of The Flight of the Phoenix (1965). Other films include the comedy-drama The Secret of Santa Vittoria (1969), where he played a German officer during the Second World War trying to find hidden wine in a small Italian town; Stanley Kubrick's Barry Lyndon with Ryan O'Neal (1975); Richard Attenborough's A Bridge Too Far (sharing a scene with Laurence Olivier, 1977); and The Wild Geese with Richard Burton (1978). Because of his stereotypical Teutonic look (blond hair and blue eyes), Krüger often performed in roles portraying German soldiers.[9]

Krüger mostly retired from acting in the late 1980s and is today a writer, he published 16 books since 1970.[10] He also directed a number of European television documentaries[11], showing him travelling around the world.

Krüger married his third wife Anita in 1978. They live in California and Hamburg.[12] He has three children, two of them are also actors: Christiane Krüger (born 1945, when he was only 17 years old and with his later wife Renate Densow), and with his second wife Malaika Krüger (born 1967) and Hardy Krüger Jr. (born 1968).