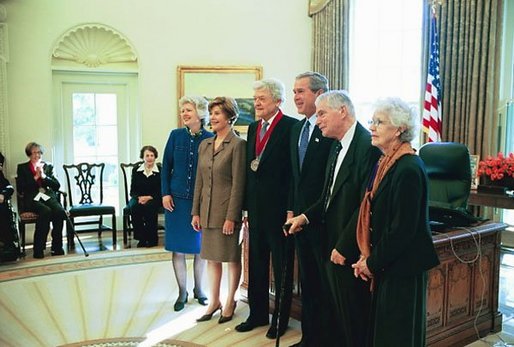 Harold Rowe Holbrook Jr. (born February 17, 1925) is an American actor, television director and writer. He first received critical acclaim in 1954 for a one-man stage show he developed, Mark Twain Tonight, while studying at Denison University, performing as Mark Twain.[1] He won Tony Award for Best Actor in a Play in 1966 for his portrayal of Twain.[2] Throughout his career, he won five Primetime Emmy Awards.[3]

Holbrook's role as Ron Franz in Sean Penn's Into the Wild (2007) earned him both Screen Actors Guild Award and Academy Award nominations for Best Supporting Actor.[2] Until Robert Duvall was nominated for an Academy Award in 2015, Holbrook was the oldest actor to receive a Best Supporting Actor nomination.[6] In 2009, Holbrook received critical acclaim for his performance as recently retired farmer, Abner Meecham, in the independent film That Evening Sun.[7]

In his later career, Holbrook appeared as Francis Preston Blair in Steven Spielberg's Lincoln (2012), provided his voice as Mayday in the Disney animated film Planes: Fire & Rescue (2014) and as Whizzer in Blackway (2015).[8][9]

As a television actor, Holbrook is known for starring in and directing four episodes in Designing Women as Reese Watson, opposite his wife, Dixie Carter.[1] Later in his career, he has starred in minor roles in Sons of Anarchy, The Event, and Rectify.[5] He has guest-starred in many critically acclaimed television series such as NCIS, The West Wing, The Sopranos, ER, Bones, Grey's Anatomy, and Hawaii Five-0.[10]

In 2003, Holbrook was honored with the National Humanities Medal by President George W. Bush.[11]

After being abandoned by his parents at age two, along with his two older sisters, they were raised by his paternal grandparents, first in Weymouth, Massachusetts, and later in the Cleveland suburb of Lakewood.[12] He graduated from Culver Military Academy, now part of the Culver Academies, and then from Denison University, where an honors project about Mark Twain led him to develop the one-man show for which he is best known, a series of performances called Mark Twain Tonight.[13]

Holbrook's first solo performance as Twain was at Lock Haven State Teachers College in Pennsylvania in 1954.[15] Ed Sullivan saw him and gave Holbrook his first national exposure on The Ed Sullivan Show on February 12, 1956.[15] Holbrook was also a member of the Valley Players (1941-1962), a summer-stock theater company based in Holyoke, Massachusetts, which performed at Mountain Park Casino Playhouse at Mountain Park.[16] He joined The Lamns in 1955, where he began developing his one-man show.[12] He was a member of the cast for several years and performed Mark Twain Tonight as the 1957 season opener.[16] The State Department even sent him on a European tour, which included pioneering appearances behind the Iron Curtain.[12] In 1959, Holbrook first played the role off-Broadway.[15] Columbia Records recorded an LP of excerpts from the show.[4]

Holbrook performed in a special production for the New York World's Fair (1964, 1965) for the Bell Telephone Pavilion.[17] Jo Mielziner created an innovative audio-visual ride experience and used Holbrook's acting talents on 65 different action screens for "The Ride Of Communications" with the movie itself known as From Drumbeats to Telstar.[17]

In 1967, Mark Twain Tonight was presented on television by CBS and Xerox, and Holbrook received an Emmy for his performance.[4] Holbrook's Twain first played on Broadway in 1966, and again in 1977 and 2005; Holbrook was 80 years old during his most recent Broadway run, older (for the first time) than the character he was portraying.[4] Holbrook won a Tony Award for the performance in 1966.[4] Until Holbrook retired in 2017, aged 92, Mark Twain Tonight toured the country, which amounted to over about 2100 performances.[19] He has portrayed Twain longer than Samuel Langhorne Clemens did.[18]

Holbrook co-starred with Martin Sheen in the controversial and acclaimed 1972 television film That Certain Summer.[4] In 1973, Holbrook appeared as Lieutenant Neil Briggs, the boss and rival of Detective Harry Callahan (Clint Eastwood) in Magnum Force, an "obsessively neat and prim fanatic" who supports the obliteration of San Francisco's criminals and who is the leader of a rogue group of vigilante officers.[22][23]

In 1976, Holbrook won acclaim for his portrayal of Abraham Lincoln in a series of television specials based on Carl Sandburg's acclaimed biography.[4] He won a Primetime Emmy Award for Outstanding Lead Actor in a Drama Series for the 1970 series The Bold Ones: The Senator.[12] In 1979, he starred with Katharine Ross, Barry Bostwick, and Richard Anderson in the made-for-TV movie Murder by Natural Causes.[1] Holbrook also had a major role on the sitcom Evening Shade throughout its entire run.[1] Early in his career, Holbrook worked onstage and in a television soap opera, The Brighter Day.[4] He is also famous for his role as the enigmatic Deep Throat (whose identity was unknown at the time) in the film All the President's Men.[24][10] Holbrook was the narrator on the Ken Burns documentary Lewis & Clark: The Journey of the Corps of Discovery in 1997.[12]

Holbrook performing as Twain at the University of Houston

From 1986-89, Holbrook had a recurring role as Reese Watson on Designing Women, opposite his wife Dixie Carter. For a short period between 1988 and 1990, Holbrook directed four episodes of the series.[4]

In 1999, Holbrook was inducted into the American Theatre Hall of Fame.[25]

In 2000, Holbrook appeared in Men of Honor, where he portrayed a racist and hypocritical officer who endlessly tries to fail an African-American diver trainee.[26]

He appeared in Sean Penn's critically acclaimed film Into the Wild (2007) and received an Oscar nomination for Best Performance by an Actor in a Supporting Role at the 80th Academy Awards.[2] At the time, this rendered Holbrook, at age 82, the oldest nominee in Academy Award history in the Best Supporting Actor category.[2]

On December 20, 2007, Holbrook was nominated for a Screen Actors Guild Award for his work in the film.[2] In late August through mid-September 2007, he starred as the narrator in the Hartford Stage production of Thornton Wilder's Our Town, a role he had once played on television.[2]

In 2003, President George W. Bush honored Holbrook with a National Humanities Medal for "charming audiences with the wit and wisdom of Mark Twain as Twain's outlook never fails to give Holbrook a good show to put on".[11]

Holbrook appeared with wife Dixie Carter in That Evening Sun, filmed in East Tennessee in the summer of 2008.[7] The film, produced by Dogwood Entertainment,[7] is based on a short story by William Gay. That Evening Sun premiered in March 2009 at South By Southwest, where it received the Audience Award for Narrative Feature and a special Jury Prize for Ensemble Cast.[7] Joe Leydon of Variety hailed Hollbrook's performance in the film as a "career-highlight star turn as an irascible octogenarian farmer who will not go gentle into that good night."[7] That Evening Sun also was screened at the 2009 Nashville Film Festival, where Holbrook was honored with a special Lifetime Achievement Award, and the film itself received another Audience Award.[27]

President George W. Bush and Laura Bush pose for a photo with Holbrook (center), a recipient of the National Humanities Medal in the Oval Office on November 14, 2003

Holbrook appeared as a featured guest star in a 2006 episode of the HBO series The Sopranos and the NCIS episode "Escaped".[4] On April 22, 2010, Holbrook signed on to portray Katey Sagal's character's father on the FX original series Sons of Anarchy for a four-episode arc in their third season, as well as appearing in additional fifth episode in the final season.[28] He also had a multiple-episode arc on The Event, an American television series on NBC, appearing in the 2010-2011 season.[1]

In 2014, Holbrook was the subject of Scott Teems' documentary Holbrook/Twain: An American Odyssey depicting Holbrook's long lasting career as portraying Twain.[12] It was premiered at the Los Angeles Film Festival that same year.[12]

In September 2017, after six decades of playing the role of Mark Twain, Holbrook announced his retirement from the one-man show Mark Twain Tonight![19] Holbrook indicated that he would like to continue working on movies and television.[19]

Holbrook has been married three times and has three children. He married a Canadian, Ruby Elaine Johnstone (born August 28, 1923; later known as actress Ruby Holbrook) on September 22, 1945, and they had two children, Victoria Rowe Holbrook and David Vining Holbrook.[4] They divorced in 1965, and on December 28, 1966, he married Carol Eve Rossen. They had one child, Eve Holbrook, and they divorced on June 14, 1983.[4]

Holbrook and Carter at the 41st Primetime Emmy Awards, 1990

Architect Hoyte Johnson of Atlanta redesigned Carter's Tennessee family home and created an environment that the couple shared with family and friends.[36] Holbrook said the home has the "feel" of the Mark Twain House in Hartford, Connecticut, and that there is no other place to which he feels so ideally suited.[36][37] Holbrook had a recurring role on his wife's hit sitcom Designing Women, appearing in nine episodes between 1986 and 1989 as Carter's on-screen significant other.[4] In 2011, Holbrook's memoir, Harold: The Boy Who Became Mark Twain, was published by Farrar, Straus and Giroux.[38]

In October 2016, Holbrook wrote a letter to The New York Times defending actor-director Nate Parker over his alleged 1991 rape of a woman and Parker's controversial film The Birth of a Nation.[39] He urged others to "move on" from Parker's past and to view the film which was "an exceptional piece of artistry and a vital portrait of our American experience".[39]

Holbrook is a converted Christian, although he has occasionally criticized the politicization of religion.[40] He is a registered independent, but leans towards the liberal end of the political spectrum.[41] He criticized the Republican Party while Barack Obama was in office.[41]

In 2016, he castigated then-Republican-candidate Donald Trump for not having "the maturity to run the country".[15] Holbrook praised Senator Bernie Sanders as the only politician who does not "say what they think might get them elected" and praised his honesty.[42] In 2017, Holbrook again criticized President Trump, saying, "We have who has been elected president now who is upending and destroying a great many of our American values...he's trying to distort the American dream, which he's doing every hour of the day."[43] Holbrook opposes President Trump's immigration ban while praising the protests against the ban.[43]

The local community of McLemoresville, Tennessee, hometown of his late wife Dixie Carter, constructed the Dixie Theatre for Performing Arts in nearby Huntingdon, Tennessee, which features the Hal Holbrook Auditorium.[36]

On June 8, 2017, actor J. G. Hertzler announced his candidacy as a U.S. House Representative for New York's 23rd congressional district in the 2018 elections.[44] In his campaign, he plans to act "in the persona of Mark Twain", to present his ideas "through the brilliant humorist for all ages" as a tribute both to Twain and to Holbrook.[45]

Upon his retirement from his Mark Twain persona, The HuffPost hailed Holbrook as "the man who has done more to keep Mark Twain on people's minds than anyone else".[46]

Report a problem
Write to Hal Holbrook at FanPal • 2021