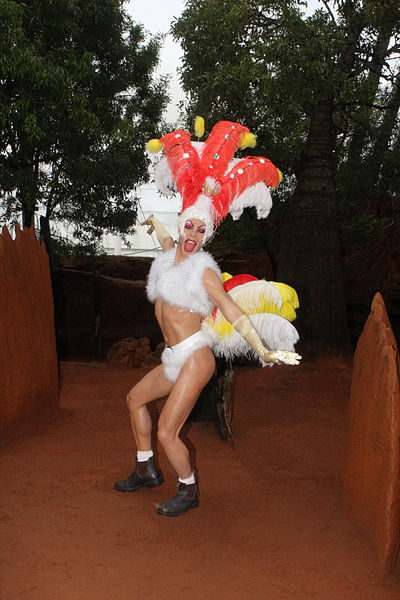 Pearce was born in Ely, Cambridgeshire, UK.[4] His mother, Anne Pickering (born 1940), was from County Durham, England; she was a schoolteacher specialising in needlework and home economics. His father, Stuart Pearce (1932-1976), was a New Zealand-born RAF Squadron leader and a Hawker Siddeley Harrier test pilot.

When Pearce was three years old, his father took the job of Chief Test pilot for the Australian Government Aircraft Factories, relocating the family to Geelong, Victoria where his mother taught at Matthew Flinders Girls High school. When Pearce was age 8, his father died in an accident at Avalon Airport while taking off in an extended-range version of the GAF Nomad.[5][6][7][2]

Pearce attended Geelong College, a local private school, and was a member of the Geelong Society of Dramatic Arts (GSODA) Junior Players. At the age of 16, he was a competitive amateur bodybuilder, leading to the title of Junior Mr. Victoria. He also took part in fencing. He lived in Box Hill North, Victoria in the late 1980s while working on the Australian drama series Neighbours.

Pearce starred in several theatre productions when he was young. At 17 years of age, while still at school at Geelong College, he landed his first film role; a part in "Life and Study at University", a promotion for university study produced and directed by Peter Lane of Deakin University.

Pearce transitioned to television when he was cast in the Australian soap opera Neighbours in 1985, playing the role of Mike Young for several years. Pearce also found roles in other television series such as Home and Away (1988) and Snowy River: The McGregor Saga (1993).

The director/producer/writer Frank Howson cast Pearce in his first three films, Heaven Tonight, Hunting, and Flynn, and paid for him to go to the Cannes Film Festival in 1991 for the premiere of the Howson-directed Hunting. The accompanying Howson-funded publicity campaign brought Pearce to the attention of the international film industry. He made his first major film breakthrough shortly after, with his role as a drag queen in The Adventures of Priscilla, Queen of the Desert in 1994. Since then, he has appeared in several US productions including L.A. Confidential, Ravenous, Rules of Engagement, Memento, The Count of Monte Cristo, and The Time Machine.

Pearce portrayed pop artist Andy Warhol in Factory Girl and Harry Houdini in Death Defying Acts. He also appeared in The Road and in Bedtime Stories with Adam Sandler.[8]

Pearce continues to perform in Australian films, such as The Hard Word (2002) and The Proposition (2005), written by fellow Australian Nick Cave.

In January 2009, Pearce returned to the stage after a seven-year absence.[9] He performed in the Melbourne Theatre Company's production of Poor Boy, a play with music, co-written by Matt Cameron and Tim Finn.[9]

In 2010, he appeared as David Prince of Wales, who became King Edward VIII, in The King's Speech. He is the eponymous lead in the Australian TV miniseries Jack Irish, an adaptation of the detective novels of author Peter Temple broadcast on the ABC network in 2012. In May 2012, Pearce was cast to star in David Michôd's The Rover. In 2013, Pearce played the villain character Aldrich Killian in Iron Man 3.

Pearce had a supporting role in Neil Armfield's romantic-drama film Holding the Man, as Dick Conigrave. The 2015 film stars Ryan Corr and Craig Stott, with supporting performances from Pearce, Anthony LaPaglia and Geoffrey Rush. Holding the Man was adapted from Timothy Conigrave's 1995 memoir of the same name.

Next to acting, Guy has a lifelong passion for music and songwriting. He released his first album, Broken Bones, in November 2014.[10] Pearce appeared in a documentary special celebrating Neighbours' 30th anniversary titled Neighbours 30th: The Stars Reunite, which aired in Australia and the UK in March 2015.[11][12]

Pearce will release his second studio album The Nomad in 2018.[13]

Pearce appeared in Australian band Silverchair's music video for "Across the Night" and in Razorlight's video for "Before I Fall to Pieces." He recorded the soundtrack for A Slipping-Down Life, singing and playing guitar on cover versions of songs by Ron Sexsmith, Vic Chesnutt and Robyn Hitchcock.

On 18 September 2011, Pearce won the Primetime Emmy Award for Outstanding Supporting Actor in a Miniseries or Movie for his work in Mildred Pierce as Monty Beragon opposite Kate Winslet.

Pearce married his childhood sweetheart,[14] psychologist Kate Mestitz, in March 1997.[15] In October 2015, Pearce confirmed he and Mestitz had ended their marriage after 18 years.[16]

An Australian rules football fan who supports the Geelong Football Club in the Australian Football League, Pearce has done media work with the club, including a documentary narration.

He supports a number of charitable organisations for many causes such as animal rights, animal welfare and protecting the Earth's ecology.[17]