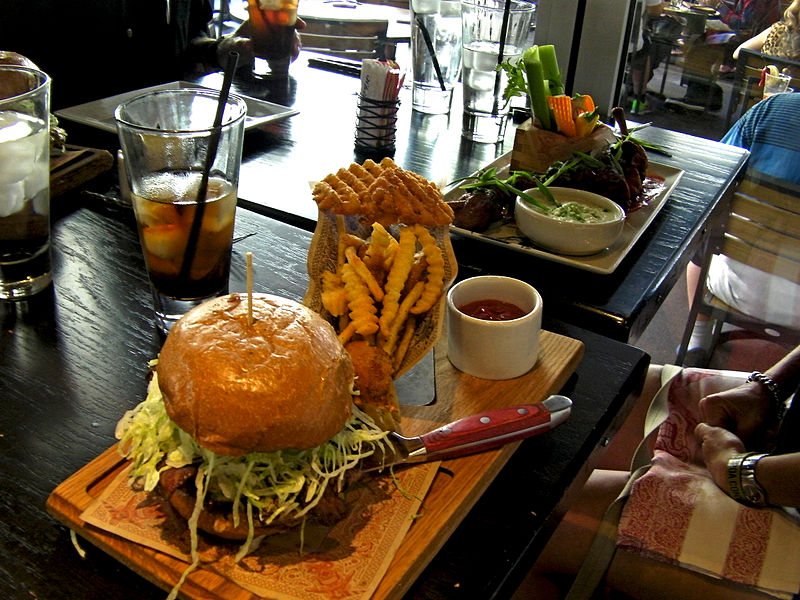 Guy Ramsay Fieri (/fiˈɛri/;[10] né Ferry; born January 22, 1968)[2] is an American restaurateur, author, game show host, and an Emmy Award winning television personality. He co-owns three restaurants in California,[11] licenses his name to restaurants in New York City and Las Vegas, Nevada,[12] and is known for his television series on the Food Network. By mid-2010, the Food Network had made Fieri the "face of the network". In 2010, The New York Times reported that Fieri brought an "element of rowdy, mass-market culture to American food television", and that his "prime-time shows attract more male viewers than any others on the network".[13]

Fieri was born in Columbus, Ohio, the son of Penelope Anne (Price) and Lewis James Ferry. He grew up in Ferndale in rural Humboldt County, California. During high school, he was a foreign exchange student in France, where he developed his interest in food and cooking.[3] His paternal grandfather was of Italian descent; Fieri changed his surname, Ferry, back to his family's original surname, Fieri, when he got married in 1995, in order to honor his immigrant great-grandfather, Giuseppe Fieri.[14]
Read more...

Fieri began his association with food in grade school in Ferndale, by selling pretzels from his "Awesome Pretzel" cart and washing dishes to finance his trip to France to study.[15] On his return to the United States, he worked at the restaurant at the Red Lion Inn in Eureka, California, until he went to Las Vegas for college.[15] Fieri attended the University of Nevada, Las Vegas and graduated with a Bachelor of Science in Hotel Management in 1990.[16][17] Soon after graduation, he went to work for Stouffer's, as manager of a Long Beach, California, restaurant.[18][13] After three years in southern California, he became district manager of Louise's Trattoria, managing six locations along with recruiting and training for the restaurants.

In late 1996, Fieri and business partner Steve Gruber opened Johnny Garlic's, a "California Pasta Grill" in Santa Rosa, California. A second location opened in Windsor in 1999, a third in Petaluma in 2000 or 2001 (since closed), and a fourth in Roseville in late 2008. Subsequently, they developed Tex Wasabi's (barbecue and sushi) in 2003 in Santa Rosa, adding a second location in Sacramento's Arden-Arcade area in 2007 (which was rebranded as Johnny Garlic's, and then subsequently closed). An additional Johnny Garlic's was opened in Dublin, California, in 2011. His first New York City restaurant, Guy's American Kitchen and Bar, opened in 2012 to scathing New York Times coverage by Pete Wells that Larry Olmsted of Forbes called "the most scathing review in the history of the New York Times", and "likely the most widely read restaurant review ever." Fieri, for his part, accused Wells, the nation’s highest profile reviewer, of using Fieri's fame as a platform for advancing his own prestige.[19][20] Despite appearing on Restaurant Business's list of the top 100 independent restaurants as ranked by sales for four years in a row, the restaurant announced plans to close at the end of 2017.[21] In 2011, Fieri partnered with Carnival Cruise lines to create Guy’s Burger Joint to sell Fieri's burgers fleet-wide. In April 2014, Guy Fieri's Vegas Kitchen and Bar opened in Las Vegas.[22] In 2015, Guy Fieri's Baltimore Kitchen & Bar opened in Baltimore's Horseshoe Casino.[23]

After winning the second season of The Next Food Network Star[24] on April 23, 2006, Fieri was awarded a six-episode commitment for his own cooking show on Food Network. Guy's Big Bite premiered on June 25, 2006 with the most recent episode airing on November 16, 2016.[25]

Diners, Drive-Ins and Dives, his second series, premiered in April 2007 (a one-hour special aired in November 2006), with Fieri traveling the country visiting local eateries. The New York Times called the series "not a cooking show as much as a carefully engineered reality show".[13] Ultimate Recipe Showdown, co-hosted with Marc Summers, debuted on February 17, 2008, and aired for three seasons. On September 14, 2008, Guy Off the Hook debuted on Food Network. This special studio audience show aired through the end of 2008, but the extra cost of staging an audience show did not result in a ratings bump and the concept was discontinued. For Thanksgiving 2008, Fieri hosted a one-hour special titled Guy's Family Feast. He used the "Guy Off the Hook" set for the special, which was broadcast live, on November 28, 2008. Fieri appeared on other Food Network programs such as Dinner: Impossible in 2007 and 2009, Paula's Party, Ace of Cakes, and The Best Thing I Ever Ate.

In December 2009, NBC named Fieri as the host of the game show Minute to Win It, which premiered in March 2010 and aired for two seasons.[26] On May 13, 2012, NBC announced that the game show would not be renewed for a third season, citing high production costs and low ratings.

Fieri receives the key to the city of Ferndale from the Ferndale City Council at a special council meeting on November 23, 2012.[27]

In January 2012, Fieri was one of the two team captains (along with Rachael Ray) in the Food Network reality series Rachael vs. Guy: Celebrity Cook-Off.[28] A second season of Rachael vs. Guy: Celebrity Cook-Off began airing on Food Network on January 6, 2013. A chef challenge show, Guy's Grocery Games, started on October 27, 2013, on the Food Network. It features four cooks who battle through three rounds, and are judged by three judges.[29]

His latest series, Guy's Family Road Trip, was chosen as the 2017 lead-out show from season 13 of Food Network Star. It previewed on August 13 of that year.

In 2009, Fieri began touring with the Guy Fieri Roadshow, a multi-state food tour that featured some of his fellow Food Network personalities.[33][34] He also appeared in regional Food Network events, such as the 2012 Atlantic City Food and Wine Festival[35] and the 2012 South Beach Food and Wine Festival, where he officiated at 101 gay weddings.[36]

In 2015, Fieri officiated at the wedding of celebrity chef Art Smith at Miami Beach. The wedding, which included over two dozen same-sex couples, was held to celebrate Florida's Supreme Court lifting the state ban on same-sex marriage.[37]

Fieri owns a vineyard and sells his wine under the label Hunt & Ryde, named after his sons Hunter and Ryder.[38]

Fieri is the co-author of four books with Ann Volkwein, which were New York Times bestsellers for a total of more than 33 weeks.[40][41]

Fieri has authored books of recipes.