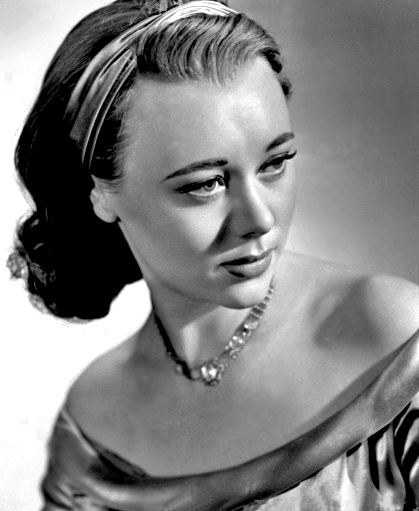 Glynis Johns (born 5 October 1923) is a retired British stage, television and film actress, dancer, pianist, and singer. Born in Pretoria, South Africa while her parents were on tour, she is best known for creating the role of Desiree Armfeldt in A Little Night Music on Broadway, for which she won a Tony Award, and for playing Winifred Banks in Walt Disney's musical motion picture box office smash Mary Poppins. In both roles, she sang songs written specifically for her, including "Send in the Clowns", composed by Stephen Sondheim, and "Sister Suffragette", written by the Sherman Brothers. She was nominated for an Oscar for her work in the 1960 film The Sundowners. She is notable for the breathy quality of her husky voice and her eternally upbeat persona.[1]

Johns was born in Pretoria, South Africa, the daughter of Alice Maude Steele (née Wareham; 1901-1970), a pianist, and Mervyn Johns (1899-1992), a British stage and film actor.[2] Her roots are in West Wales, and she was born in Pretoria while her parents were performing on tour there. She attended Clifton High School in Bristol for a short time.[citation needed] Her ancestors on the Johns side are recorded as living at the farm Glanmorlais Uchaf, Trimsaran, Carmarthenshire in 1701.[citation needed]
Read more...

Johns made her first stage appearance in Buckie's Bears as a child ballerina at the Garrick Theatre in 1935. (She later became a qualified ballet teacher). She was spotted dancing in a children's play during the Christmas holidays and cast in her first notable stage production, St Helena at the Old Vic in 1936. That year she was also in productions of The Children's Hour and The Melody That Got Lost. She followed this with Judgement Day (1937), then became a stage star in A Kiss for Cinderella (1937).[3]

Johns received good reviews for her performance as Deborah Kerr's best friend in Perfect Strangers (1945). She continued in supporting roles: This Man Is Mine (1946), Frieda (1947) and An Ideal Husband (1947).

Johns became a star playing the title role in Miranda (1948), a mermaid who causes havoc in a London household. Directed by Ken Annakin the film was a solid hit and established Johns as a film name.[4]

Johns supported Richard Todd in Flesh and Blood (1951) and was third billed in the Hollywood-financed No Highway in the Sky (1951). She co-starred with David Niven in Appointment with Venus (1951) for director Ralph Thomas and was one of several star names in Encore (1951) and The Magic Box (1951).

Johns was one of Alec Guinness' love interests in The Card (1952). On Broadway she played the title role in Gertie. She was voted by British exhibitors the tenth most popular local star at the box office in 1951 and 1952.[5][6]

She was reunited with Richard Todd for two swashbucklers made for Walt Disney: The Sword and the Rose (1953) (directed by Annakin) and Rob Roy, the Highland Rogue (1953). In between she made Personal Affair (1953) supporting Gene Tierney.

Johns had the starring role in The Weak and the Wicked (1954), about women in prison, and a big hit. She did another for Annakin, The Seekers (1954) with Jack Hawkins, then co-starred with Robert Newton in The Beachcomber (1954). Mad About Men (1954) was a sequel to Miranda, directed by Thomas.

She returned to Broadway to play the title role in a production of Major Barbara (1956). Johns stayed in America to make the melodrama All Mine to Give (1957).

She returned to Britain to make Another Time, Another Place (1958) and was in Shake Hands with the Devil (1959). Johns was top billed in The Spider's Web (1960) and had a good supporting role in The Sundowners (1960) which earned her an Oscar nomination.

Johns was top billed in the remake of The Cabinet of Caligari (1962) and one of several stars in The Chapman Report (1962). She supported Jackie Gleason in Papa's Delicate Condition (1962) and was in Too Good to be True on Broadway in 1963.

She was cast in 1961 in the ABC/Warner Brothers crime drama The Roaring '20s. She portrayed Kitty O'Moyne, an Irish immigrant who falls overboard into the harbour as she arrives in the United States. In the 1962-63 television season, Johns guest starred in the CBS anthology series The Lloyd Bridges Show. In the autumn of 1963, she and Keith Andes starred as a married couple in her eponymous CBS television series Glynis, in which she played a mystery writer and Andes a criminal defence attorney. The programme was cancelled after thirteen episodes.[7]

Johns had a huge success appearing in A Little Night Music (1973). The song "Send in the Clowns" was written with her in mind.[8] In 1973, she won a Tony award for her role in the musical.

During the first season of NBC's hit sitcom Cheers, Johns guest starred as Diane Chambers' mother, Helen Chambers, a rich eccentric who, due to a stipulation in Diane's late father's will, will lose all her money unless Diane is married by the next day. From 1988-89, she played Trudie Pepper, a senior citizen living in an Arizona retirement community, in the television sitcom Coming of Age on CBS.[10]