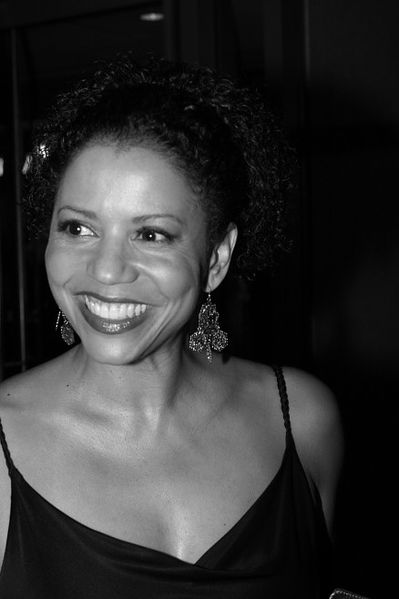 Gloria Elizabeth Reuben (born June 9, 1964) is a Canadian producer, singer and actress of film and television, known for her role as Jeanie Boulet on the medical drama ER and Marina Peralta on Falling Skies. In film, she is known for portraying Elizabeth Keckley in Lincoln.

She is currently recurring in the role of Dr. Krista Gordon on Mr. Robot and on the main cast of Saints & Sinners as Mayor Pamela Clayborne.

Reuben was born in Toronto, to Pearl Avis (Mills), a classical singer, and Cyril George Reuben, an engineer.[2] Her parents were both Jamaican-born. Her father was mostly Caucasian (with Ashkenazi and Sephardi Jewish roots), though also had some African ancestry; her mother was of mostly African descent.[1][3] Her father died when she was young.[4][5][6][7]

Reuben is the half-sister of Denis Simpson, an actor and children's television host who died in 2010.[5] She was the subject of a segment of Henry Louis Gates Jr.'s television genealogy series Finding Your Roots. She began learning piano as a child and later studied music technique and theory, ballet and jazz at The Royal Conservatory of Music.[6] Her career as an actress was triggered by a few jobs as a model and appearances in television advertisements.

Reuben is known for her role on the American television series ER as Jeanie Boulet, an HIV-positive physician assistant on the hospital's staff. She was a guest star throughout Season 1 and was elevated to full-time cast member at the beginning of Season 2. She continued that role until early Season 6, when she left the show. In 2008, Reuben returned to ER for one episode during its 14th season. She has stated that this role led to her HIV/AIDS activism.[8]

Reuben again held a major role in a television series when she starred as FBI agent Brooke Haslett in 1-800-Missing (2003-2004). She later starred as Rosalind Whitman in the TNT series Raising the Bar. In 1996 she was chosen by People magazine as one of the 50 Most Beautiful People in the World.[citation needed]

In 2000, she sang backup vocals for Tina Turner on her Twenty Four Seven Tour.[citation needed]

In 2012, Reuben played Elizabeth Keckley in Steven Spielberg's historical drama film Lincoln and her portrayal of the character received critical praise.[11] In 2013, she guest starred on the sci-fi drama series Falling Skies.

Report a problem
Write to Gloria Reuben at FanPal • 2021