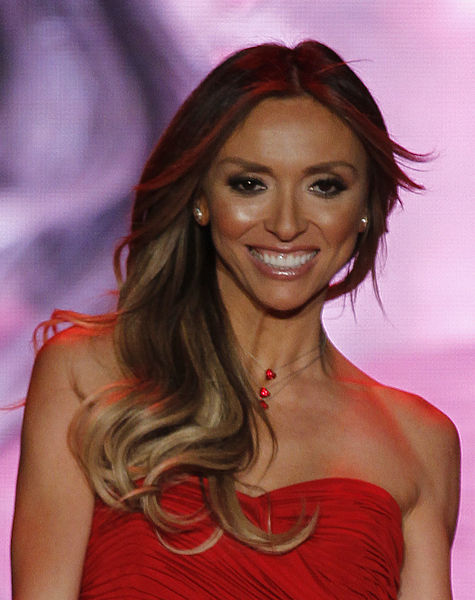 Rancic was born in Naples, Italy and immigrated to the United States with her family at age seven.[3] She had surgery to correct her scoliosis during her late teens. In 1996,[3] she received a bachelor's degree in journalism from the University of Maryland, College Park, and a master's degree in journalism from American University.[4] During this time, she worked for a Capitol Hill news bureau covering stories related to the U.S. government.[4] Rancic also graduated from Barbizon Modeling and Acting School.[5]
Read more...

Additionally, she co-hosts E!'s Fashion Police and often co-hosts red carpet events for award shows, such as the Golden Globes and the Academy Awards. She is the creator and executive producer of MTV's Celebrity Rap Superstar, which premiered in 2007. She and her husband, Bill Rancic, star in the reality-television show Giuliana and Bill which aired on E!. She appeared in the movie Bring It On: Fight to the Finish in a brief scene. Rancic also has hosted the Miss USA and Miss Universe beauty pageants on NBC.[citation needed]

In 2013, Giuliana launched her clothing line, G by Giuliana, on HSN, a hugely successful line on HSN.[7] She also launched a wine line, Xo, G.[8]

In 2013, Rancic, who has a history of breast cancer, founded Fab-U-Wish, a charity that grants wishes to women undergoing breast cancer treatment.[9]

In February 2015, Rancic faced backlash over her controversial comments about synthetic dreadlocks worn by Zendaya at the Oscars, remarking that the hair looked like it smelled of "patchouli and weed".[10]

On July 10, 2015, Rancic announced that after nearly a decade, she will be leaving her position as co-anchor on E! News, yet she will continue to be the host of Fashion Police.[11]

On September 4, 2018, the personality returned to her anchor job behind the desk of E! News a year after Catt Sadler's controversial exit.[12]

On December 15, 2006, Giuliana and Bill Rancic announced their engagement. They were married on September 1, 2007, in a ceremony on Capri at Sancta Sophia Church in Anacapri.[13][14]

The two have publicly discussed their fertility issues on television talk shows, having tried to conceive since approximately the beginning of 2009.[15] The couple began in vitro fertilization (IVF) in March 2010,[15] and Rancic got pregnant in the spring of 2010, but she miscarried at nine weeks.[16][17] She had an IVF transfer for a second time in November 2010; however, the procedure did not result in a pregnancy. When the couple decided to try for a third round of IVF, her doctor recommended a mammogram, which is how she found out she had breast cancer. Despite her condition, the couple were still motivated to have a baby, so they continued with the egg retrieval and found a surrogate.[18]

On October 17, 2011, during an interview on Today, Rancic announced she had been diagnosed with early stage breast cancer, for which she would be treated with a double lumpectomy, followed by radiation. She underwent surgery in mid-October 2011 and returned to work at E! News about a week later.[19] On December 5, 2011, Rancic disclosed she had decided to undergo a bilateral mastectomy.[20][21]

On April 23, 2012, Giuliana and Bill announced on The Today Show that they were expecting their first child, via gestational carrier, due in late summer.[22] In August 2012, the couple welcomed a son, Edward Duke Rancic, in Denver, Colorado.[23][24]

Rancic was ranked #93[25] on the Maxim Hot 100 Women of 2004. She was also featured in People magazine's 100 Most Beautiful of 2006 issue. Giuliana was nominated Favorite TV Celebreality Star for the 2012 People's Choice Awards.[26] In June 2014, Rancic was named "Fan Favorite" during the Daytime Emmy Awards. She dedicated the award to her six million followers on social media.[6]

In 2015, Giuliana was criticized on social media for her racist comments about Zendaya's dreadlocks.[27]