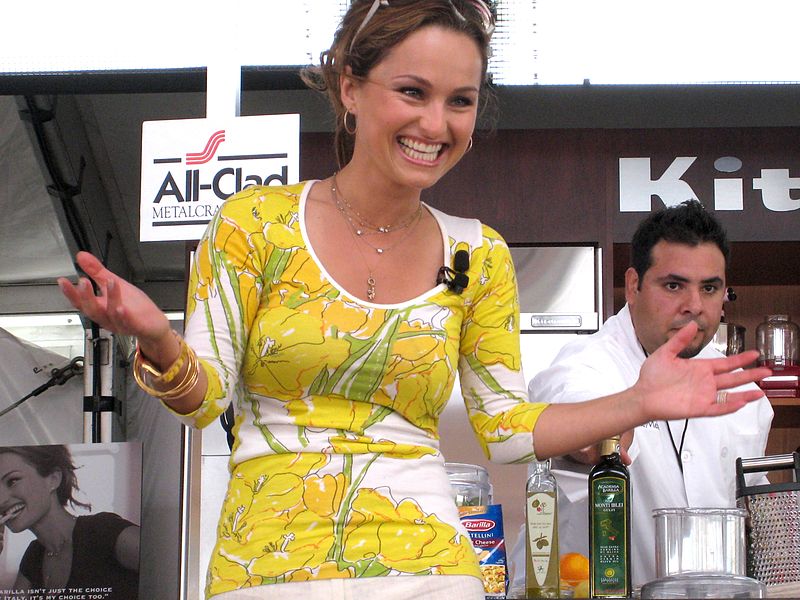 Giada Pamela De Laurentiis (;[1] born August 22, 1970) is an Italian-born American chef, writer, and television personality. She is the host of Food Network's Giada at Home. She also appears regularly as a contributor and guest co-host on NBC's Today. De Laurentiis is the founder of the catering business GDL Foods.[2] She is a winner of the Daytime Emmy Award for Outstanding Lifestyle Host, the Gracie Award for Best Television Host, and in 2012, she was inducted into the Culinary Hall of Fame.[3]

De Laurentiis was born in Rome, Italy, the eldest child of actress Veronica De Laurentiis and her first husband, actor-producer Alex De Benedetti.[4] De Benedetti was a close associate of Giada's maternal grandfather, film producer Dino De Laurentiis. As a child, Giada often found herself in the family's kitchen and spent a great deal of time at her grandfather's restaurant, DDL Foodshow.[2][4] Her parents were married in February 1970 but were later divorced. After her parents' divorce, Giada and her siblings moved to Southern California, where they took their mother's surname.[5] After graduating from Marymount High School in Los Angeles, De Laurentiis attended the University of California, Los Angeles, earning her bachelor's degree in social anthropology in 1996.[2][4]

Her maternal great-grandmother was English and her grandmother was British-Italian film star Silvana Mangano.[4] Her siblings include sister Eloisa, a makeup artist, and brothers Igor and Dino Alexander II, a Hollywood film editor who died of melanoma in 2003.[6] Her stepfather is producer Ivan Kavalsky.

De Laurentiis studied at Le Cordon Bleu in Paris,[2][4] with aspirations of becoming a pastry chef. After returning to the United States, she became a professional chef working in several Los Angeles restaurants, notably the Wolfgang Puck-owned Spago. She later worked as a food stylist and was contacted by the Food Network after styling a piece in Food & Wine magazine in 2002.

Her Food Network daytime cooking show, Everyday Italian, premiered April 5, 2003.[2] On Chefography, a Food Network biography program, she said she never wanted to be in her "family business" of show business, and that she felt uncomfortable in front of the camera when she first began hosting Everyday Italian. When the program first aired, the Food Network received mail accusing the network of hiring a model or actress pretending to cook instead of a real chef.[7]

De Laurentiis began hosting Behind the Bash in October 2006. The program examines the catering process behind big event extravaganzas such as the Grammy Awards. In January 2007, a third De Laurentiis-hosted show, Giada's Weekend Getaways, debuted on Food Network. On this show, De Laurentiis travels to a featured locale (including Seattle, South Beach, San Francisco, Napa, and Jackson Hole, Wyoming) and visits her favorite local culinary destinations. On a November 2006 episode of Iron Chef America, De Laurentiis and Bobby Flay competed against, and were defeated by, Rachael Ray and Mario Batali.

In 2007, De Laurentiis appeared as a presenter at the inaugural Food Network Awards. In June 2007, she hosted a two-part Food Network special entitled Giada in Paradise, featuring the two locales of Santorini, Greece and Capri, Italy. De Laurentiis also made several appearances as a guest judge on the third season of The Next Food Network Star, which aired in 2007. That year she was dubbed a "petite powerhouse" by Town & Country magazine, standing "just under five-foot two".[8] In 2008, she won a Daytime Emmy Award for Outstanding Lifestyle Host.

In 2008, De Laurentiis and the Barilla Group, launched an Italian gourmet line under the Academia Barilla name—Barilla's first-ever gourmet celebrity product line.[9] That same year, Giada at Home premiered, showing De Laurentiis in a kitchen preparing meals and parties for family and friends. The show is shot on a set that is very similar to her own home.[10] She joined fellow chef Bobby Flay as a judge in season 7 of Food Network Star and took on a new role in season 8 as a team leader of five cooks competing against Bobby Flay's and Alton Brown's respective teams.[2]

In 2014, De Laurentiis voiced the character of Gelata in the US version of the Tinker Bell special Pixie Hollow Bake Off.

In 2018, De Laurentiis voiced herself in the movie Scooby-Doo! and the Gourmet Ghost.

De Laurentiis has a range of products made exclusively for Target. Her products consist of stainless steel pots and pans, a wide range of utensils, cooking tools, and some food items including sauces and pastas.

De Laurentiis opened her first restaurant May 2014. The restaurant simply called "Giada" is located in The Cromwell, located on the strip in Las Vegas, Nevada.[13] The celebrity chef turned restaurateur plans on opening her second Las Vegas kitchen in early 2018.[14] Pronto by Giada is taking up residency in Caesars Palace and will be a casual dining restaurant. In July 2017, she announced she would also be opening a restaurant in the Horseshoe Casino in Baltimore, Maryland, just north of Washington, D.C. It will be called GDL Italian by Giada, and is scheduled to open on May 16, 2018.[15]

On May 25, 2003, De Laurentiis married Todd Thompson, a fashion designer. The couple's only child, Jade Marie De Laurentiis-Thompson, was born on March 29, 2008.[16] Jade was named after her mother—"Giada" is Italian for "Jade." While acknowledging how special the experience of having a child has been, she has stated that she does not plan to have more children. De Laurentiis remains focused on her career, saying, "I have so many babies: the show, Todd, and Jade."[10] On December 29, 2014, De Laurentiis announced on her website that she and Todd separated the previous July, and had decided to end their marriage.[17] The divorce was finalized on September 3, 2015.[18] Since November 2015 she has been romantically involved with TV producer Shane Farley.[19][20]

Both Giada at Home and Weeknights with Giada landed in the number one position on The New York Times Best Seller list.[21][22]