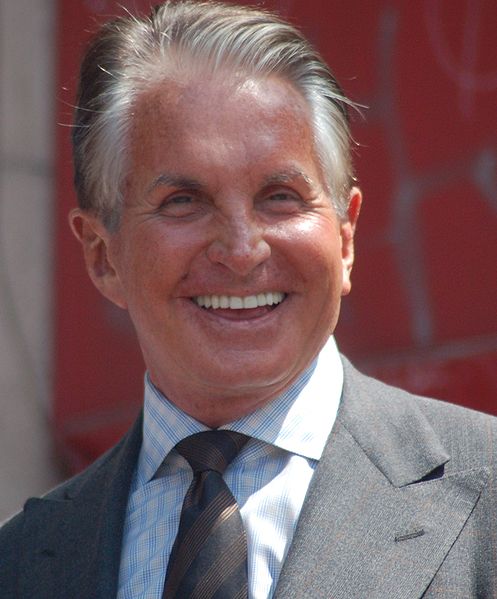 Hamilton began his film career in 1952 and although he has a substantial body of work in film and television he is, perhaps, most famous for his debonair style and his perfect and perpetual suntan. Bo Derek writes in her autobiography "there was an ongoing contest between John and George Hamilton as to who was tanner".[1]

Hamilton was born in Memphis, Tennessee, and lived in Blytheville, Arkansas. He is the eldest son of bandleader George "Spike" Hamilton.[2]

His stepfathers were Carleton Hunt and Jesse Spalding; his stepmother was June Howard, with whom Hamilton said he had an affair when he was 12 years old which was shortly after she married his father.[3][4]

Hamilton's first roles were in TV. He appeared on such shows as The Veil, The Adventures of Rin Tin Tin, The Donna Reed Show and Cimarron City. His first film role was a lead, Crime and Punishment U.S.A. (1959). Although shot in 1958 it was not released until the following year. However it was seen by Vincente Minnelli who thought Hamilton would be ideal for the younger son in Home from the Hill (1960), a Southern melodrama with Robert Mitchum. Hamilton was duly cast and the film was popular. MGM signed him to a long-term contract.

Hamilton supported Natalie Wood and Robert Wagner in the melodrama All the Fine Young Cannibals (1960) which flopped at the box office. Hamilton's next film was far more popular, the beach party comedy Where the Boys Are (1960). This was a hit and remains one of his best known movies. Hamilton wanted to do more serious material, however, so he appeared in the lower budgeted Angel Baby (1961), a drama about an evangelist, for Allied Artists. It had minimal commercial or critical impact. For United Artists he supported Lana Turner in a melodrama, By Love Possessed (1961).

MGM tried to change his image by putting him in a Western, A Thunder of Drums (1961) alongside Richard Boone; the film was mildly popular. Hamilton lobbied hard for the role of the Italian husband in Light in the Piazza (1962), another melodrama, with Olivia de Havilland. The film lost money but Hamilton received excellent notices. It was shot in Italy, and MGM kept Hamilton in that country to play a role in Two Weeks in Another Town (1962), an unsuccessful attempt to repeat the success of The Bad and the Beautiful (1952). Hamilton had an excellent part in The Victors (1963), an anti-war drama from Carl Foreman. It was a box office disappointment but was critically acclaimed. Hamilton had another good role in Act One (1963), playing Moss Hart, but the movie was poorly received.

After making a cameo in Looking for Love (1964), Hamilton appeared in another biopic, Your Cheatin' Heart (1964), playing Hank Williams. The movie was not widely seen but had its fans and Hamilton's performance received some praise. Hamilton went to Mexico to support Jeanne Moreau and Brigitte Bardot in Viva Maria! (1965). It was directed by Louis Malle who cast Hamilton on the strength of his performance in Two Weeks in Another Town. Malle said "he was a personal choice and I am happy with him.... He's more interested in being in the social columns - I don't understand - when he should be one of the greatest of his generation."[7] The film was hugely popular in Europe, but did not break through to the US. Hamilton made a movie in France, That Man George (1965). After appearing in a production of A Farewell to Arms (1966) on TV, he returned to MGM to make a romantic comedy with Sandra Dee, Doctor, You've Got to Be Kidding! (1967), which was mildly popular. At Columbia he co-starred with Glenn Ford in a Western A Time for Killing (1967), originally directed by Roger Corman then Phil Karlson.

Hamilton played a cat burglar in MGM's Jack of Diamonds (1967). It was produced by Sandy Howard who said Hamilton was "a hot commodity these days" because he was dating Lyndon Johnson's daughter.[8] Reports put his fee around this time at $100,000 a movie. He was drafted into the army but received a 3-A deferral notice on the grounds he was the sole financial provider for his mother.[9] (Hamilton's draft deferment was highly controversial at the time because it was thought that his relationship with the president's daughter gave him preferential treatment.[10]) Hamilton then made a science fiction movie for George Pal at MGM, The Power (1968). He went into television, supporting Lana Turner in Harold Robbins' The Survivors (1969-70).[11]

Hamilton decided to move into producing to give himself greater control over his career. He produced and played the title role in Evel Knievel (1971). Hamilton had the script rewritten by John Milius who later called Hamilton "a wonderful guy, totally underrated. A great con-man, that's what he really is. He always said, 'I'll be remembered as a third-rate actor when in fact, I'm a first-rate con man'."[12]

A surprise blockbuster hit came his way in 1979 when Hamilton showed a flair for comedy in Love at First Bite which was the story of Count Dracula's pursuit of a young Manhattanite model, played by Susan Saint James. The movie included such scenes as Dracula and his conquest dancing to "I Love the Nightlife" at a disco. The film's box-office success created a popularity surge for Hamilton, who also served as executive producer. He followed it with a farcical portrayal of the famed swordsman character in 1981's Zorro, the Gay Blade, which he produced. He was nominated for the Golden Globe Award for Best Actor - Motion Picture Musical or Comedy for both films. However, Zorro was not as popular as Love at First Bite and film leads dried up quickly. In the mid-1980s, Hamilton starred in the sixth season of the ABC Aaron Spelling-produced nighttime television serial Dynasty. He supported Joan Collins in the mini series Monte Carlo (1986) and had the lead in a short lived series Spies (1987). Hamilton played a doctor who uses hypnosis to commit a murder on a 1975 episode of Columbo. He returned for a second homicide on the long-running Peter Falk detective series in 1991, this time playing the host of an America's Most Wanted-style television show. Hamilton later became a semi-regular panelist on the 1998 revival of Match Game.

A break for Hamilton came in 1990 when Francis Ford Coppola cast him as the Corleone family's lawyer in a much-anticipated film, The Godfather Part III. For the second time, he portrayed a murderer on the television series Columbo, starring as the host of a TV true-crime show in the 1991 episode "Caution: Murder Can Be Hazardous to Your Health." He had previously been in the 1975 episode "A Deadly State of Mind". With his matinee-idol looks it was sometimes noted that Hamilton physically resembled Warren Beatty. Beatty's political satire Bulworth contained a running gag about this with Hamilton appearing as himself in a brief cameo.

In 2003, Hamilton hosted The Family which was a reality television series on ABC for one season. The program starred ten members from a traditional Italian-American family, each fighting for a $1,000,000 prize. In 2006, Hamilton competed in the second season of ABC's Dancing with the Stars[13] with professional Edyta Sliwinska in which they lasted until the sixth round. At age 66 and recovering from knee injuries, Hamilton, unable to match the limber dance moves of his younger competitors, charmed the audience and judges with endearingly silly dances utilizing props including a Zorro mask and the sword from Zorro, The Gay Blade.

In 2006, it was rumored that Hamilton would replace Bob Barker on The Price Is Right. He auditioned for the show and in March 2007, TMZ reported that Hamilton was a frontrunner to replace Barker. According to Reuters, Hamilton was one of the final three contenders to host the show, alongside Mark Steines and Todd Newton.[14] Soon thereafter, however, Drew Carey was named as Barker's successor. Subsequently, Hamilton has hosted the live stage adaptation of the show, The Price Is Right Live!. In August 2008, Hamilton co-starred in Coma, a web series on Crackle.[15] Hamilton was executive producer of the 2009 film My One and Only, which is loosely based on his early life and relationship with his mother.

Hamilton was honored with a star on the Hollywood Walk Of Fame on August 12, 2009 - his 70th birthday.[16] In 1999, a Golden Palm Star on the Palm Springs, California, Walk of Stars was dedicated to him.[17] Hamilton appeared as a contestant on the UK edition of I'm a Celebrity…Get Me out of Here! (UK series 9) in November 2009. Hamilton walked out of the jungle on November 30, 2009, telling the other contestants that he wasn't there to win, but to have fun.[18][19] Hamilton was considered one of the favorites to win the series. In 2010 Hamilton was chosen as one of David Hasselhoff's roasters in the Comedy Central Roast of David Hasselhoff. Starting in the fall of 2011, Hamilton starred as "Georges" for the national tour of the Tony-winning revival of La Cage aux Folles.[20] He was still starring in the show as of June 2012[update].

In 2015 George and his ex-wife, Alana Hamilton appeared in Season 4/Episode 10 of Celebrity Wife Swap. Alana swapped with Angela "Big Ang" Raiola of Mob Wives fame, and her husband, Neil Murphy. In the summer of 2016, Hamilton appeared in television commercials for KFC as the "Extra Crispy Colonel," a deeply tanned version of the company's mascot, Colonel Sanders, a role which he returned to in the spring of 2018. In the summer of 2018, Hamilton will portray the Colonel on General Hospital.[21]

In the late 1980s Hamilton launched the George Hamilton Skin Care System and the George Hamilton Sun Care System and tanning salons.[22][23] A cigar lounge bearing his name was opened in the late 1990s at the New York, New York, hotel in Las Vegas and other locations, along with a line of cigars bearing the actor's name. A January 1998 article in Cigar Aficionado magazine described Hamilton's style as "Cary Grant meets Pat Riley".[24][25][26]

In April 2006 Hamilton served as grand marshal for the 79th Annual Shenandoah Apple Blossom Festival in Winchester, Virginia.[27] In 2016 and 2018, Hamilton appeared as the "Crispy Colonel" in commercials for KFC, playing on his "Tan Man" image.[28]

In 1966 Hamilton had a relationship with Lynda Bird Johnson, the daughter of US President Lyndon B. Johnson.[29] Hamilton was married to actress Alana Stewart from 1972 to 1975. Their son, Ashley Hamilton, was born in 1974. George Thomas Hamilton is his younger son (born in December 1999) with his ex-girlfriend Kimberly Blackford. Hamilton has one granddaughter, born to his eldest son.[30]

The divorced Hamiltons reunited in the mid-1990s to co-host a daytime talk show, George and Alana. In I'm A Celebrity he revealed he had dated at least four Miss Worlds. Hamilton has a well-known social relationship with Imelda Marcos, the widow of former Philippines president Ferdinand Marcos. It was later revealed that he also had business ties to the Marcoses. In 1990 Hamilton was named as an unindicted co-conspirator in a federal fraud and racketeering case against the Marcoses involving looting Philippine government funds; Imelda was acquitted in the case.[31]

According to Burt Reynolds' autobiography,[32] Hamilton has a healthy sense of humor, even when the humor is directed at him: Reynolds once made up a birthday card for Hamilton with a composite photograph of Tony Curtis and Anthony Perkins, titled "To George, love from Mum and Dad". Hamilton found the card hilarious and showed it to everybody. My One and Only, a 2009 comedy film starring Logan Lerman, was loosely based on a story about George Hamilton's early life on the road with his mother and brother, featuring anecdotes that Hamilton had told to Merv Griffin.

Report a problem
Write to George Hamilton at FanPal • 2020