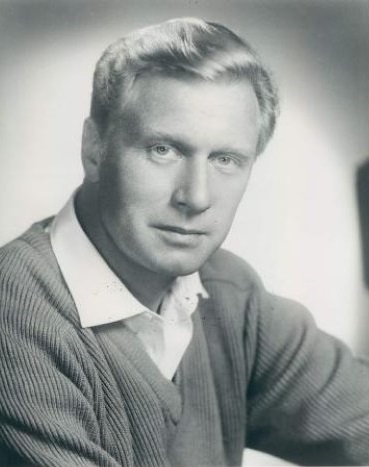 George Gaynes (born George Jongejans; May 3, 1917 - February 15, 2016) was an American singer, actor and voice artist. Born to Dutch and Russian parents in Finland, he served in the Royal Netherlands Navy during World War II and subsequently immigrated to the United States, where he became a citizen and began his acting career on Broadway.

Gaynes' most recognized roles in cinema were that of Commandant Eric Lassard in the Police Academy series and as John Van Horn in the 1982 comedy film Tootsie. He appeared as the curmudgeonly but lovable foster parent Henry Warnimont on the NBC series Punky Brewster; as high-powered theatrical producer Arthur Feldman on The Days and Nights of Molly Dodd, in which Gaynes' real-life wife, Allyn Ann McLerie, co-starred as his love interest; and as Frank Smith, the mob boss brought down by Luke Spencer (Anthony Geary) on the soap opera General Hospital.

Gaynes was born on May 3, 1917, in Helsinki,[1] in what was then the Grand Duchy of Finland, part of the Russian Empire (Finland became independent that year), the son of Iya Grigorievna de Gay (later known as Lady Abdy), a Russian artist, and Gerrit Jongejans, a Dutch businessman.[2] His uncle was the actor Gregory Gaye.[2] He was raised in France, England, and Switzerland.[3] Gaynes graduated from the Collège Classique Cantonal near Lausanne in 1937.[4] He also attended the Music School of Milan from 1938-39,[4] and many years later trained at the Actors Studio in New York City from 1953-58.[4]

In 1940, Gaynes lived in France but after the Battle of France and the German occupation he escaped to Pyrenees but was soon arrested by the Francoist Spain police. In 1942 after his release Gaynes intended to return to the Netherlands to join the Dutch resistance against the Nazi occupation, but instead made his way to the United Kingdom to enlist in the Royal Netherlands Navy. On April 8, 1943, Gaynes was commissioned as a seaman recruit and assigned to the auxiliary ship HNLMS Oranje Nassau which was stationed in Holyhead in Wales. Because of his multilingualism (he spoke Dutch, English, French, Italian and Russian), he was detached on May 1, 1943 to the Royal Navy as a translator assigned to the convoy commodore HMS Hilary which participated during July and August 1943 in Operation Husky the Allied invasion of Sicily. On September 1, 1943, Gaynes was reassigned to the destroyer HMS Wilton which participated during January 1944 in the Battle of Anzio. On January 1, 1944, he was promoted to Sergeant (Petty officer, 1st class). After the Battle of Anzio, the HMS Wilton was assigned to the Adriatic Sea and continued to see action during the Adriatic Campaign. On July 14, 1946, Gaynes was honorably discharged from the Royal Netherlands Navy.

In 1946, Gaynes returned to France but an American theater director offered him a role in a Broadway musical and he moved to New York City later that year and became an American citizen in 1948.[1][5][6] During this time, his best-known appearances were in Wonderful Town and the musical version of My Sister Eileen.[6] Gaynes alternated between stage musicals and both comedic and dramatic plays, including his role as Bob Baker in the original production of Wonderful Town (1953), Jupiter in the Cole Porter musical Out of This World (credited as George Jongejans),[7] Gilbert and Sullivan operettas, and as Henry Higgins in the 1964 U.S. tour of My Fair Lady.[8] In television, Gaynes played the role of Henry Warnimont, the eventual foster father for Punky Brewster in the eponymous series. He also provided the voice for Henry in the animated Ruby-Spears version of the show. Behind the camera, he directed the very last episode of WKRP in Cincinnati. Films in which he appeared include The Way We Were, Nickelodeon, and Tootsie.[9][10][11][12][13][14][15][16]

Gaynes was married to the stage and television actress and dancer Allyn Ann McLerie from December 20, 1953; they had two children, Matthew Gaynes and Iya Gaynes Falcone Brown. Matthew was shortlisted for the Olympic team the year that President Jimmy Carter boycotted the 1980 Olympics after the Russians invaded Afghanistan. Matthew died in a car crash in India in 1989.[2][31][1]

In addition to Gaynes joining the cast of his wife's series The Days and Nights of Molly Dodd in 1989, he and McLerie had previously worked together on Punky Brewster, when she guest starred in a first-season episode as a love interest of Henry Warnimont's.

Report a problem
Biography of George Gaynes at FanPal • 2021