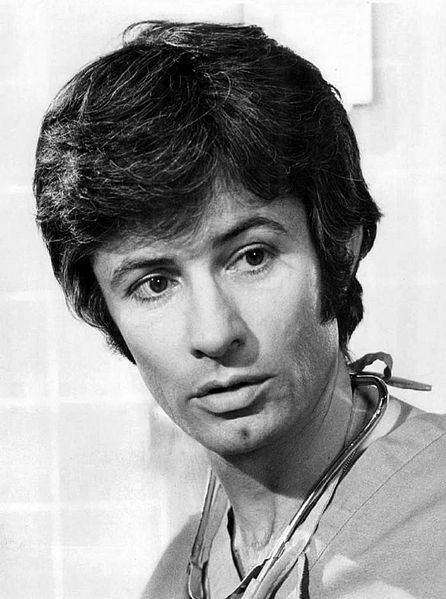 Chakiris was born in Norwood, Ohio, to Steven and Zoe (née Anastasiadou) Chakiris,[1] immigrants from Greece. He attended high school in Tucson, Arizona and Long Beach.[2][3]

Chakiris did one year of college but he wanted to dance so he dropped out and moved to Hollywood. He worked in the advertising branch of a department store and began to study dancing at night.[2]

Chakiris made his film debut in 1947, in the chorus of Song of Love.

He was one of the dancers in Marilyn Monroe's "Diamonds Are a Girl's Best Friend" number in Gentlemen Prefer Blondes (1953), and was also in Give a Girl a Break (1953).

He can be seen in the funeral dance in the MGM musical film Brigadoon (1954) and was in There's No Business Like Show Business' (1954).

Chakiris appeared as a dancer in White Christmas (1954). A publicity photo of Chakiris with Rosemary Clooney from her "Love, You Didn't Do Right By Me" scene generated fan mail, and Paramount signed him to a movie contract. "I got lucky with the close-up with Rosemary," said Chakiris[4][5]

Chakiris was in The Country Girl (1954), and The Girl Rush (1955), dancing with Rosalind Russell in the latter. He received a positive notice from Hedda Hopper.[6]

Chakiris had a small non-dancing part in Under Fire (1957).

Frustrated with the progress of his career, Chakiris left Hollywood for New York. West Side Story had been running for a year on Broadway, and Chakiris auditioned for Jerome Robbins. He was cast in the London production as "Riff", leader of the Jets. The musical launched on the West End in late 1958 and Chakiris received excellent reviews, playing it for almost 22 months.[8]

The Mirisch Brothers brought the film rights to West Side Story and tested Chakiris. They ended up feeling his dark complexion made him more ideal for the role of Bernardo, leader of the Sharks, and cast Russ Tamblyn as Riff. Filming took seven months.[9] [2]

The film of West Side Story (1961) was hugely successful and Chakiris won the Academy Award for Best Supporting Actor for his performance. This led him to be contracted by the Mirisch Company to a long-term contract.[10]

Chakiris played the lead role in a British film, Two and Two Make Six (1962), directed by Freddie Francis. He was announced for Day of the Damned with Montgomery Clift but it was not made.[11]

He starred as a doctor in the film Diamond Head (1963) opposite Charlton Heston and Yvette Mimieux, which was popular.[12]

In the early 1960s, he embarked on a career as a pop singer, resulting in a couple of minor hit songs. In 1960, he recorded one single with noted producer Joe Meek.

Chakiris' fee around this time was a reported $100,000 per movie.[13] His first new film for the Mirishes was Flight from Ashiya (1964), shot in Japan with Yul Brynner and Richard Widmark.

The Mirisches announced him for Young Lucifer with Tuesday Weld directed by Irving Kershner but it was not made.[14] Neither was a film version of Carnival! which Arthur Freed wanted to make with Chakiris, Yvette Mimieux and Robert Goulet.[15]

Instead the Mirsches reunited Chakiris with Brynner in Kings of the Sun (1963), an epic about the Mayans which was a box office flop. Chakiris went to Italy to make Bebo's Girl (1964) with Claudia Cardinale.

He did 633 Squadron (1964), a popular war movie with Cliff Robertson, the last movie he made for the Mirisches. Chakiris later said he made a mistake with his Hollywood films but looking at the "potential" of them instead of the quality of the roles.[16]

He acted along with Catherine Deneuve and Gene Kelly in Jacques Demy's French musical Les Demoiselles de Rochefort (1967). Around this time his manager cancelled his contract with Capital Records.[18] However he enjoyed his time in Europe saying he had time to "experiment and refine my craft."[16] He also did a nightclub act at Cesar's Palace in Las Vegas, his first stage work since West Side Story.

The show was successful and led to Chakiris receiving an offer to appear alongside Jose Ferrer in a TV production of Kismet (1967). He did The Day the Hot Line Got Hot (1968) in France and The Big Cube (1969) with Lana Turner in America. He made Sharon vestida de rojo (1970) in Spain.[19]

In 1969 Chakiris did a stage production of The Corn is Green in Chicago with Eileen Herlie. He enjoyed the experience and it revived his confidence as an actor. He said all the films he made after West Side Story had been "a waste of time... it was difficult to take them seriously... It was my fault and no one else's".[20]

Chakiris accepted a dramatic role on Medical Center to change his image.[20]

He starred in the first national tour of the Stephen Sondheim musical, Company, touring as Bobby in 1971-72.

He appeared in the final episode of The Partridge Family as an old high school boyfriend to Shirley Partridge (Shirley Jones, also a musical theater veteran and the person who just happened to have presented him with his Academy Award). Their kiss goodbye was the final scene in the program's run. He also starred in a film Why Not Stay for Breakfast? (1979).

Chakris appeared in several episodes of Dallas and had an arc on Santa Barbara.

Chakiris had a recurring role on the TV show Superboy as Professor Peterson during the first two seasons from 1988-1990.

He was top billed in the film Pale Blood (1990) and guest starred on Human Target and The Girls of Lido. He played The King And I on stage in 1995 in Los Angeles.

Chakiris' last role to date was in a 1996 episode of the British sitcom Last of the Summer Wine.

A vegetarian himself, in 2012 he presented a musical about veganism titled Loving the Silent Tears.[22][23]

Report a problem
Write to George Chakiris at FanPal • 2022