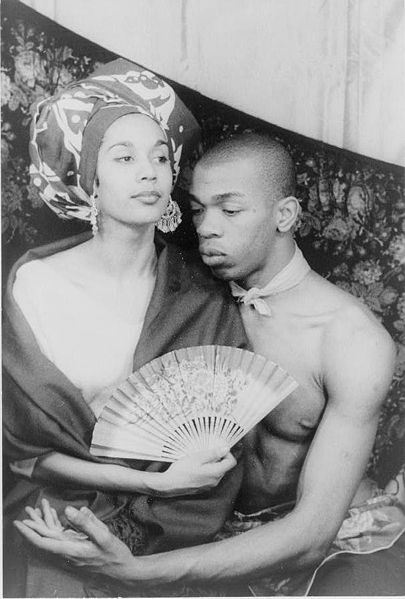 Geoffrey Lamont Holder (August 1, 1930 - October 5, 2014) was a Trinidadian-American actor, voice actor, dancer, choreographer, singer, director and painter.[1] He was known for his height (6 ft 6 in, 1.98 m), "hearty laugh", and heavily accented bass voice[2] combined with precise diction. Particularly remembered as the villain Baron Samedi in the 1973 Bond-movie Live and Let Die and for his role of Punjab in the 1982 film Annie, he was also known for his 7 Up commercials of the 1970s and '80s.

Holder was born in Port of Spain, Trinidad. One of four children,[3] of parents who had emigrated to Trinidad from Barbados,[4] Holder attended Tranquillity School and then secondary school at Queen's Royal College in Port of Spain. At the age of seven, he made his debut in the dance company of his elder brother Boscoe Holder, from whom he had been receiving lessons in dancing and painting.[1]

In 1952, choreographer Agnes de Mille saw Geoffrey Holder dance in St. Thomas.[1][5] She invited him to New York; he would teach at the Katherine Dunham School of Dance for two years.[6]

Holder was a principal dancer with the Metropolitan Opera Ballet in New York City from 1955 to 1956.[7] He made his Broadway debut in House of Flowers, a musical by Harold Arlen (music and lyrics) and Truman Capote (lyrics and book).[8] He also starred in an all-black production of Waiting for Godot in 1957.[8]

Holder began his movie career in the 1962 British film All Night Long, a modern remake of Shakespeare's Othello. He followed that with Doctor Dolittle (1967) as Willie Shakespeare, leader of the natives of Sea-Star Island. In 1972, he was cast as the Sorcerer in Everything You Always Wanted to Know About Sex*. The following year he was a henchman - Baron Samedi - in the Bond-movie Live and Let Die.[3] He contributed to the film's choreography.

In addition to his movie appearances, Holder became a spokesman for the 1970s and 1980s 7 Up soft drink "uncola" and 1980s "crisp and clean, and no caffeine" and "never had it, never will" advertising campaigns.[9][10]

In 1975, Holder won two Tony Awards for direction and costume design of The Wiz, the all-black musical version of The Wizard of Oz. Holder was the first black man to be nominated in either category.[2] He won the Drama Desk Award for Outstanding Costume Design. The show ran for 1672 performances.[11]

In the 1982 film Annie, Holder played the role of Punjab. He was in the 1992 film Boomerang with Eddie Murphy. He was also the voice of Ray in Bear in the Big Blue House and provided narration for Tim Burton's version of Roald Dahl's Charlie and the Chocolate Factory. He reprised his role as the 7 Up Spokesman in the 2011 season finale of The Celebrity Apprentice, where he appeared as himself in a commercial for "7 Up Retro" for Marlee Matlin's team.

Holder was a prolific painter (patrons of his art included Lena Horne and William F. Buckley, Jr.),[16] ardent art collector, book author, and music composer. As a painter, he won a Guggenheim Fellowship[15] in fine arts in 1956.[17] A book of his photography, Adam, was published by Viking Press in 1986.[18]

In 1955, Holder married dancer Carmen de Lavallade, whom he met when both were in the cast of the musical House of Flowers.[2] They lived in New York City and had one son, Léo. They were the subject of a 2004 film, Carmen & Geoffrey.[5] His elder brother Boscoe Holder was a renowned dancer, choreographer, and artist. His nephew was Christian Holder (Boscoe's son), who has also won acclaim as a dancer, choreographer, and entertainer.

Geoffrey Holder died in Manhattan of complications from pneumonia on October 5, 2014, aged 84.[4]

Report a problem
Biography of Geoffrey Holder at FanPal • 2022