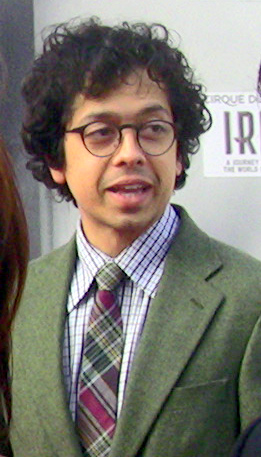 Geoffrey Arend (born February 28, 1978) is an American film, television, voice and theater actor.[1] He is best known for his role as Ethan Gross on the ABC drama series Body of Proof and currently plays Matt Mahoney on the CBS political drama series Madam Secretary.

Arend was born in the Manhattan borough of New York City. His father is European-American, and his mother is Pakistani. He graduated from New York City's Fiorello H. LaGuardia High School of Music & Art and Performing Arts in 1996.
Read more...

In 1998, Arend joined the cast of Daria[2] as the voice artist for obnoxious flirt Charles "Upchuck" Ruttheimer III. He would voice Upchuck until the end of the series in 2002, as well as in the video game Daria's Inferno. After the show finished, Arend landed small roles in films such as Super Troopers[3] and Bubble Boy.[3] He played man with an intellectual disability in the film The Ringer,[3] and then had a supporting role in the romantic comedy (500) Days of Summer.[2]

Arend previously appeared in the medical drama television series Body of Proof,[3] which aired on ABC from March 29, 2011 to May 28, 2013 and currently plays speech writer Matt Mahoney on the CBS drama Madam Secretary.[3]

On October 11, 2009, he married actress Christina Hendricks.[4] Hendricks has said in interviews that she and Arend do not plan to have children.[5]

Report a problem
Write to Geoffrey Arend at FanPal • 2021