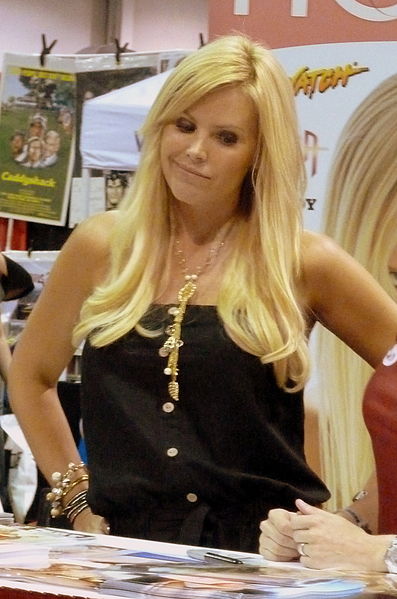 Gena Lee Nolin (born November 29, 1971) is an American actress and model. She is best known for her television appearances on The Price Is Right and Baywatch in the 1990s and during the early 2000s, she played a lead role in Sheena.

In 1994, she became one of Barker's Beauties on the game show The Price Is Right. Soon afterwards, Nolin appeared in the soap opera The Young and the Restless as a model named Sandy.

In 1995, Nolin starred as Neely Capshaw in the television series Baywatch. Later in the year, Nolin began modelling for the first time since her pregnancy for Maxim. In 1998, Nolin quit Baywatch and starred in her own TV show, Sheena, from 2000 to 2002. In 2001, Nolin posed nude for the Christmas edition of Playboy after turning it down several times.[1]

She did a music video with Billy Currington called "I Got A Feeling" that received a CMT Flame Worthy Award nomination for Best Celebrity Cameo.

She has appeared in men's magazines such as Maxim, Stuff, Playboy and FHM. In 2001, she was listed as one of FHM's sexiest women in the world.

Nolin released her first book with Simon & Schuster titled Beautiful Inside and Out, Conquering Thyroid Disease with a Healthy, Happy, "Thyroid Sexy" Life, in October 2013[2][3]

She married Greg Fahlman on November 27, 1993, they have a son Spencer Michael born (June 3, 1997). In 2001, Nolin divorced Fahlman and married former NHL hockey player Cale Hulse in 2004. They have two children: son Hudson Lee Hulse (born 2006) and Stella Monroe Hulse (born 2008).[4] Shortly after the birth of her first child, Nolin was misdiagnosed and treated for postnatal depression. She suffered greater symptoms during her second pregnancy, and then suffered arrhythmia during her third. A thyroxine level check within a blood test found a low level, and she was immediately diagnosed with Hashimoto's thyroiditis. Nolin now campaigns for regular thyroid gland checks and blood tests.[5] Gena also blogs for Celebrity Baby Scoop. Her book, hit the charts landing her book at #1 on Amazon and Barnes & Noble Top 5 Health Books.