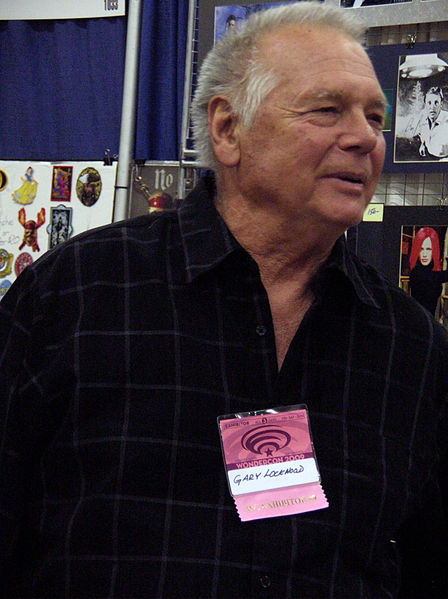 Born in the Van Nuys district of Los Angeles, California, Lockwood's birth name was "John Gary Yurosek", according to the California Birth Index.[6][7][1][2] Some sources report that he was brought up as "John Gary Yusolfsky" and later used the name "Yurosek".[8] He is of partial Polish descent.[9]

Lockwood's uncle, Mike Yurosek, is credited with creating the baby carrot.[10] Lockwood attended the University of California at Los Angeles on a football scholarship to play quarterback.[citation needed]

Lockwood was married to actress Stefanie Powers, also of partial Polish descent, in the 1960s until their divorce. He remarried, to Denise DuBarry in the 1980s.[11]

Lockwood was a film stuntman, and a stand-in for Anthony Perkins prior to his acting début in 1959 in an uncredited bit role in Warlock.

Lockwood's two series came early in his career, and each lasted only a single season. ABC's Hawaii-set Follow the Sun (1961-62) cast him in support of Brett Halsey and Barry Coe, who played adventurous magazine writers based in Honolulu. Lockwood was Eric Jason, who did the legwork for their articles, but his on-screen time was limited since most of the plot focused on Halsey or Coe.

Lockwood appeared in a supporting role in the film Splendor in the Grass (1961) and in ABC's Bus Stop (also 1961). The 26-week series, which starred Marilyn Maxwell as the owner of a diner in fictitious Sunrise, Colorado, aired a half-hour after Follow the Sun. He would star again with Weld in his film debut, 1961's Wild in the Country, with Elvis Presley. Thereafter, Lockwood starred with Jeff Bridges in the acclaimed "My Daddy Can Beat Your Daddy" episode of The Lloyd Bridges Show.

Shortly afterwards, Lockwood starred in another NBC television series The Kraft Mystery Theater (also known as Crisis) in an episode titled "Connery's Hands". He was cast opposite Sally Kellerman, with whom he would soon appear again as Helmsman Gary Mitchell in the second Star Trek pilot "Where No Man Has Gone Before" (1965) in which their characters develop god-like powers.

In 1966, Lockwood guest starred as Clint Bethard in the episode "Reunion" of ABC's The Legend of Jesse James, starring Christopher Jones in the title role of Jesse James. That same year, Lockwood appeared as Danny Hamil on the episode "Day of Thunder" of the NBC drama The Long, Hot Summer, based loosely on the works of William Faulkner. He appeared twice in 1966 as Jim Stark in the two-part episode "The Raid" of CBS' Gunsmoke with James Arness. He is well-known among science fiction fans for his role in 2001: A Space Odyssey (1968) as Dr. Frank Poole.

Lockwood co-starred with Stefanie Powers (then his wife) in an episode of ABC's Love, American Style as a newlywed who gets his mouth stuck around a doorknob. In 1983, he guest starred in the series Hart to Hart ("Emily by Hart") with Robert Wagner and Powers, by now his ex-wife.[citation needed]

Between 1959 and 2004, Gary Lockwood gained roles in some forty theatrical features and made-for-TV movies and eighty TV guest appearances, including the CBS 1975 family drama Three for the Road and Barnaby Jones starring Buddy Ebsen, in which he appeared many times as a villain.[citation needed]

Lockwood is the father of actress Samantha Lockwood by his second wife, Denise DuBarry.

Report a problem
Write to Gary Lockwood at FanPal • 2021