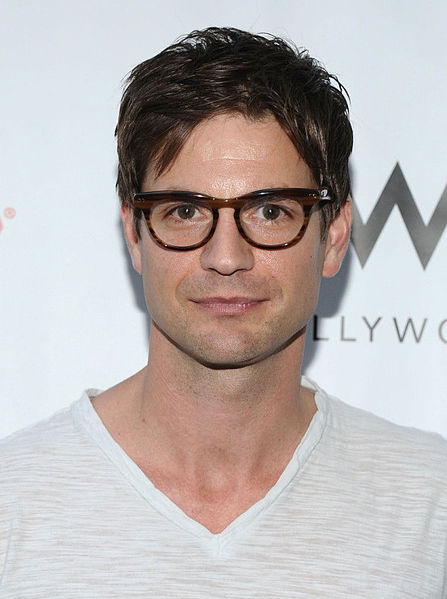 Gale Morgan Harold III (born July 10, 1969) is an American actor, known for his leading and recurring roles on Queer as Folk, Deadwood, Desperate Housewives, Grey's Anatomy, The Secret Circle and Defiance. He played the leading man in the indie hit film Falling for Grace.

Harold was born in Atlanta, Georgia. His father was an engineer and his mother a real estate agent. Because Harold's parents were devout Pentecostals, he had strict religious upbringing. At age 15, he left the church.

Following graduation from The Lovett School, Harold attended American University in Washington, DC, on a soccer scholarship. He began a Liberal Arts degree in romance literature, departing after a few months and moved to San Francisco, California to study photography at the San Francisco Art Institute. He worked a variety of jobs including construction, bartender, waiter, and apprentice motorcycle mechanic and restorer.

In 1997, a friend, Susan Landau, daughter of actor Martin Landau, suggested Harold try acting. He relocated to Los Angeles and began a 3-year period of intensive drama study. At 28, he was accepted into the Actors Conservatory Program with the classical theater company A Noise Within. In his theatrical debut, Harold appeared as "Bunny" in Gillian Plowman's Me and My Friends.

In 2000, Harold was cast as Brian Kinney, a central character on Showtime's popular gay drama Queer as Folk.

During the summer-hiatus from Queer as Folk (between seasons one and two) Harold made his New York theatrical debut playing Josh in Uncle Bob along with George Morfogen. The role of Josh was difficult and very different from the one he was playing in Queer as Folk. The play received mostly positive reviews and Harold made an auspicious debut on New York theatrical stage.[1]

In 2003, Harold starred in Wake, produced by Susan Landau Finch and directed by her husband Henry Leroy Finch.

Harold had the lead role of Special Agent Graham Kelton in the short-lived FOX series Vanished in 2006, but his character was killed off in the seventh episode and appeared only as a corpse in the eighth episode.

Harold also guest-starred as Wyatt Earp in two episodes of the HBO series Deadwood and appeared twice on the CBS series The Unit. Alongside childhood idol David Bowie, Gale is an associate producer of the documentary Scott Walker: 30 Century Man.

Harold was the male lead in the indie romantic comedy Falling for Grace, which debuted favorably at the 2006 Tribeca Film Festival (under working title East Broadway). Harold played an eligible New York bachelor in an inter-racial relationship with an Asian-American woman. The film screened at festivals, theaters and campuses in the U.S., China and Germany; it was released on DVD in March, 2010.

Harold appeared in November 2007 in a guest role on ABC's Grey's Anatomy as Shane, a paramedic and white supremacist with a swastika tattooed on his abdomen, who is injured in an ambulance crash.

Harold joined the cast of Desperate Housewives on the fourth season finale May 18, 2008 as Jackson Braddock, Susan Mayer's love interest. Six months after a serious motorcycle accident, Harold returned to play Jackson on the May 3, 2009 episode of the show.[2]

In January and February 2010, Gale performed alongside Denise Crosby (Star Trek: The Next Generation) and ex-model Claudia Mason in Tennessee Williams' Orpheus Descending at Theater/Theatre in Los Angeles. The production and cast received mostly positive reviews, with the Los Angeles Times calling his performance "brilliant" and adding "Harold, ideally cast, beautifully ignites with Crosby, whose unconventional interpretation is an affecting revelation."[3]

In July 2010, it was announced at the Television Critics Association Summer Tour that Harold had accepted a recurring role as a law professor in the upcoming series Hellcats.[4] The series concluded its season with Harold's character involved in a sexual affair with the show's lead character Marti (played by Aly Michalka). However, the series was cancelled after one season. Prior to cancellation, however, it was announced that Harold would be a regular in another prospective CW series, The Secret Circle, based on a trilogy of popular young adult novels.

Following considerable buzz in the press, the CW picked up The Secret Circle for the fall of 2011. The series revolved around a coven of teenage witches in a small town in Washington State (changed from Maine in the novels), each a member of a different witch clan dating back to the 17th Century. Harold played a scheming and powerful male witch who is the father of one of the teenagers.

Reaction from journalists who saw the show's pilot episode was almost uniformly positive, with one writer predicting:

Unfortunately, the ratings decline in the second half of the season and combined with the expensive cost of special effects, on May 11, 2012, The CW announced the cancellation of the series.[6]

In 2011 Harold was also featured in two movies, Low Fidelity and Rehab, as one of the main characters. Low Fidelity was released on VOD, digital etc. on August 6, 2013.[7]

On January 2013, it was announced that Harold was a recurring character on the new TV series "Defiance".[8] The show would air on the SyFy network from April 15, 2013.
When he was asked about his character (Conor Lang) on the show Harold said:

Harold appeared on three episodes of the first season of the show (1.06, 1.08 and 1.09). On May 10, 2013, Syfy renewed Defiance for a 13 episode second season to air in 2014.[10][11] Despite his character being killed off in the first season, Harold returned for a guest appearance in the second season of the show in the episode "Put the Damage On" and the executive producer of the show, Kevin Murphy, stated that he plans to bring the character back in season 3 as well if the show gets renewed.[12]

Due to his role as a gay character, Brian Kinney, on Showtime's Queer as Folk, Harold was interviewed by Ilana Rapp for NYCastings about whether the same-sex scenes are a challenge for an actor. Among other things, he stated:

At the Rise 'n Shine Convention (June 9, 2013), Harold said that he was currently working on a project about Civil War, Field of Lost Shoes. Shooting of the Civil War drama began that week (June 2, 2013)[17] in Lexington, Virginia.[18] Dave Kennedy (screenwriter, director) said that the goal was to get Field of Lost Shoes in theaters by November 2013[18] but it eventually premiered on April 13, 2014 in Richmond.[19] The movie is directed by Sean McNamara, produced by Thomas Farrell and is based on the novel The Battle of New Market by William C.Davis.

In 2014, Harold participated in different projects including the short film "Thirst" that was directed by Rachel McDonald and premiered at the Locarno Film Festival in Switzerland on August 7, 2014,[20][21][22] and the film "Echo Park" that premiered in the LA Film Festival on June 14, 2014.[23] He was also cast in the sci-fi/action movie Andron: The Black Labyrinth, directed by Francesco Cinquemani, which filmed in Malta and Italy August 25 through September 8, 2014.[24][25]

On October 14, 2008, Harold was hospitalized at USC Medical Center's intensive care unit after a serious motorcycle accident. He remained in critical condition after swelling of the brain was discovered as well as a fractured shoulder. Harold was subsequently released from intensive care and returned to complete his interrupted role on Desperate Housewives.[26][27] The online motorcycle publication Clutch & Chrome, which had followed his recovery closely, celebrated his new Hellcats role with an article on August 3, 2010.[28][29]

During the shootings of Vanished in 2006, Harold shot a short video for the Amber Watch Foundation showing his support about missing children. In the video he stated that "nationwide 1.3 million children go missing each year" and urged people to be champions for child safety.[30]

Harold is a supporter of the LGBT community. On July 16, 2012, at the first Annual Hot 100 Party hosted by the website After Ellen/After Elton, he recorded an It Gets Better video sending his message and advising gay teens to remember their heroes.[31] In the one-minute video, he said:

Filmography and other appearances

Report a problem
Write to Gale Harold at FanPal • 2021