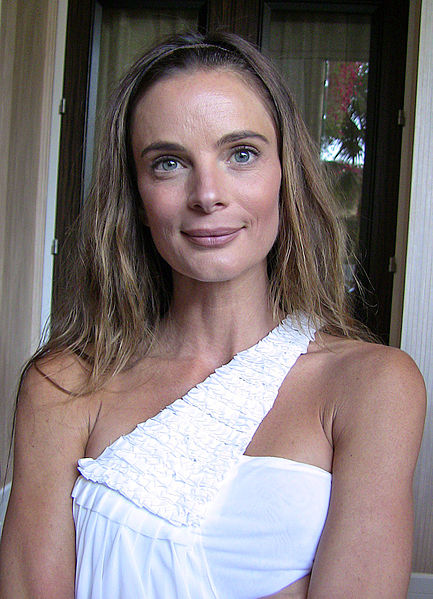 Gabrielle Anwar (born 4 February 1970) is an English actress known for her roles as Margaret Tudor on The Tudors, Fiona Glenanne on Burn Notice, Lady Tremaine in the seventh season of Once Upon a Time, and for dancing the tango with Al Pacino in Scent of a Woman.

Anwar was born in Laleham, Surrey. Her mother, Shirley Hills, is an actress, and her father, Tariq Anwar, is an award-winning film producer and editor.[1] Her paternal grandmother was an Austrian Jew, while her paternal grandfather was an Indian Muslim.[2] Anwar attended Laleham C of E Primary and Middle School from 1975 to 1982; an end-of-term St Trinian's sketch in the school concert of 1982 gave an early indication of her theatrical leanings. She studied drama and dance at the Italia Conti Academy of Theatre Arts in London.
Read more...

Anwar's acting debut was in the British miniseries Hideaway. She made her film début in Manifesto, which was followed by more British television productions including First Born, Summer's Lease, Press Gang, and The Mysteries of the Dark Jungle. While working on films and television in London, she met American actor Craig Sheffer, and moved with him to Hollywood. Anwar and Sheffer have co-starred in a number of American films together, such as In Pursuit of Honor, The Grave, Turbulence 3: Heavy Metal, Flying Virus, Save It for Later, Water Under the Bridge, and Long Lost Son.

Her first American film was If Looks Could Kill, in which she played the daughter of a murdered British agent (played by Roger Daltrey). In 1992, she made a guest appearance on Beverly Hills, 90210 as Tricia Kinney. She followed that with the films Wild Hearts Can't Be Broken (inspired by A Girl and Five Brave Horses), Scent of a Woman, Body Snatchers, For Love or Money, The Three Musketeers, and Things to do in Denver When You're Dead. In 1994, People magazine named her one of the 50 most beautiful people in the world.[3]

One of her most memorable moments on screen came in 1992's Scent of a Woman, when she danced a tango with Al Pacino, whose character was blind.

Anwar appeared in the television series John Doe and acted in The Librarian: Return to King Solomon's Mines. Anwar played Princess Margaret, sister of King Henry VIII, on Showtime's The Tudors in 2007. She later played Fiona Glenanne in the long-running television series Burn Notice. In 2008, Anwar made an appearance as Eva Sintzel, a woman trying to get pregnant through the fictitious Hudson Cryobank in the Law & Order: SVU episode "Inconceivable". She played Eddie's (Johnny Depp) girlfriend in Tom Petty's Into the Great Wide Open music video. She also played a role in the seventh season of Once Upon a Time.

Anwar and actor Craig Sheffer had a daughter, Willow (born 1993), before separating. She was later married to actor John Verea, with whom she had a son, Hugo, and daughter, Paisley, before divorcing.[4] Sheffer is godfather to Hugo and Paisley.[5]