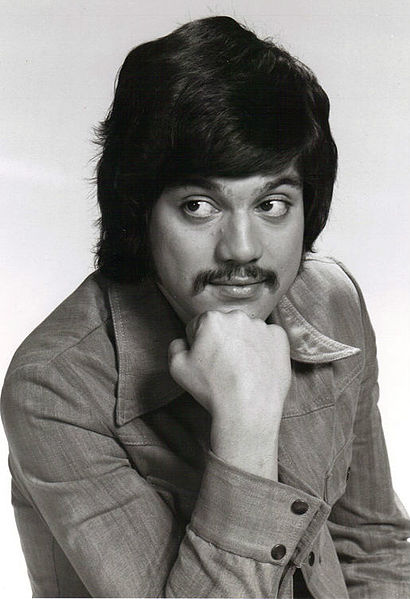 Freddie James Prinze (born Frederick Karl Pruetzel; June 22, 1954 - January 29, 1977) was an American stand-up comedian and actor. Prinze was the star of NBC-TV sitcom Chico and the Man from 1974 until his death in 1977. Prinze is the father of actor Freddie Prinze Jr.

Prinze was born Frederick Karl Pruetzel (German spelling: Prützel) in New York City, the son of Edward Karl Pruetzel (1914-1979) and Maria Graniela Pruetzel (1918-1994). His mother was Puerto Rican and his father was a German[2] Lutheran immigrant who had arrived in the U.S. as a youth in 1934.[3] Prinze was raised in a mixed neighborhood in Washington Heights, New York City.[4] When Prinze was a small child, his mother enrolled him in ballet classes to deal with a weight problem. Without telling his parents, Prinze successfully auditioned for the LaGuardia High School of Performing Arts, where he was introduced to drama and continued ballet — and where he discovered his gift for comedy while entertaining crowds in the boys' restroom. He dropped out of school in his senior year to become a stand-up comedian.

Prinze (right) with Jack Albertson on Chico and the Man, 1976.

Prinze worked at several comedy clubs in New York City, including The Improv and Catch a Rising Star, where he introduced himself to audiences as a "Hunga-rican" (part Hungarian, part Puerto Rican), despite the fact that, although his mother was of Puerto Rican ancestry, his father was a German immigrant with no Hungarian ancestry. Prinze's son, Freddie Prinze Jr., has stated that his father was half German/half Puerto Rican many times. This is also verified by census records as well as Prützel/Pruetzel family accounts. For the sake of his budding comedic career, he changed his surname to "Prinze". He chose this name because, according to his friend David Brenner, Prinze originally wanted to be known as the king of comedy, but since Alan King already had that last name and sobriquet, he would be the prince of comedy instead. During 1973, Prinze made his first television appearance on one of the last episodes of Jack Paar Tonite. In December 1973, his biggest break came with an appearance on The Tonight Show Starring Johnny Carson. Prinze was the first young comedian to be asked to have a sit-down chat with Carson on his first appearance. Prinze appeared on and guest-hosted The Tonight Show on several other occasions. He also appeared on The Midnight Special to perform his comic routine.

From September 1974 until his death in January 1977, Prinze starred as Francisco "Chico" Rodriguez in the NBC TV series Chico and the Man with Jack Albertson. The show was an instant hit. Prinze made several appearances on The Dean Martin Celebrity Roasts, most notably the roasts for Sammy Davis Jr. and Muhammad Ali. In 1975, he released a comedy album that was taped live at Mr. Kelly's in Chicago titled Looking Good—his catch phrase from Chico and the Man. In 1976, he starred in a made-for-TV movie, The Million Dollar Rip-Off. Prinze had a little-known talent for singing, examples of which could be heard in the background of the title song of the Tony Orlando and Dawn album To Be With You, in his appearances on their variety show, and on rare occasions on his own sitcom. About four months before his death, Prinze had signed a five-year deal with NBC worth $6 million.

Prinze (right) with Tony Orlando on Chico and the Man, 1976.

On October 13, 1975, Prinze married Katherine (Kathy) Elaine (Barber) Cochran, with whom he had one child, son Freddie Prinze Jr., who was born March 8, 1976. Prinze was arrested for driving under the influence of Quaaludes on November 16, 1976. A few weeks later his wife filed for divorce. Prinze had been romantically linked to actress Pam Grier[1] after they met in 1973.[5] Grier recalls their relationship in chapter nineteen of her autobiographical memoir, My Life in Three Acts.[6] Prinze was very close friends with singer Tony Orlando;[7] Orlando appeared on Chico and the Man, and Prinze appeared on Orlando's variety show.[8] As he started to make more money, Prinze took martial arts lessons from Robert Wall,[9] a student of Bruce Lee, who appeared in Enter the Dragon and Return of the Dragon. Soon after, Wall became godfather to Prinze's newborn son.[10]

Prinze suffered from depression, which deepened in the weeks after his wife filed for divorce. On the night of January 28, 1977, after talking on the telephone with his estranged wife, Prinze received a visit from his business manager, Marvin "Dusty" Snyder. With Snyder looking on, Prinze put a gun to his head and shot himself.[11] Prinze was rushed to the UCLA Medical Center and placed on life support following emergency surgery. His family removed him from life support, and he died at 1 p.m. on January 29.[12]

In 1977, the death was ruled a suicide. However, in 1983 in a civil case brought by his mother, a jury found that his death was medication-induced and accidental, which enabled the family to receive a significant life insurance settlement.[13] (Prinze had had a history of playing Russian roulette to frighten his friends for his amusement,[14] though he made farewell phone calls to numerous family members and friends on the night of his death and left a note stating that he had decided to take his life.[15][16]) Prinze is interred at Forest Lawn Memorial Park in the Hollywood Hills of Los Angeles, near his father, Edward Karl Pruetzel. His son, Freddie Prinze Jr., who was less than one year old when his father died, did not speak publicly about it until he discussed it in the documentary Misery Loves Comedy (2015), directed by Kevin Pollak.[17]

Prinze's mother wrote a book about her son, The Freddie Prinze Story (1978). Can You Hear the Laughter? The Story of Freddie Prinze (September 1979) is a TV biopic. Prinze's life and death were a focal point of one of the storylines in the movie Fame (1980), set in Prinze's alma mater, the LaGuardia High School of Performing Arts. In 2001, TV Land began showing reruns of Chico and the Man. Prinze received a star on the Hollywood Walk Of Fame on December 14, 2004, honoring his contribution to the television industry.[18][19] Actor and comedian George Lopez has acknowledged that he paid for Prinze's star.[20]

Report a problem
Biography of Freddie Prinze at FanPal • 2020