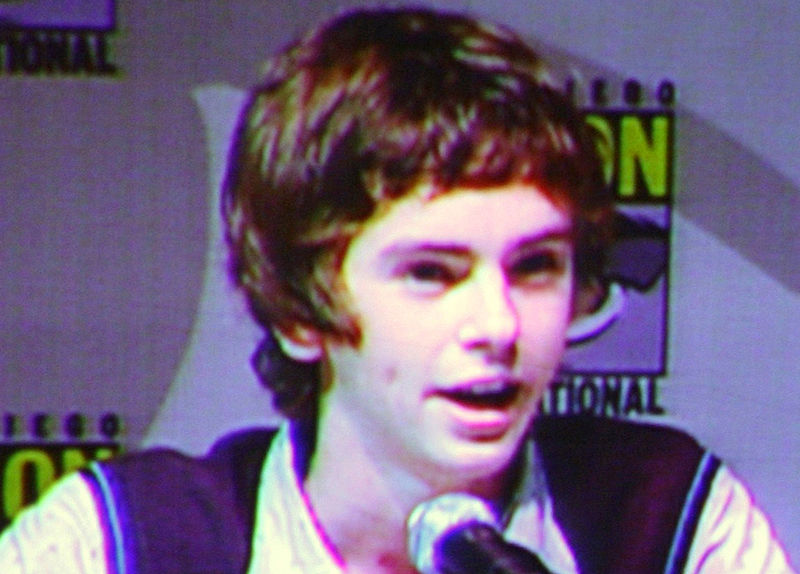 Alfred Thomas "Freddie" Highmore[1] (born 14 February 1992) is an English actor. He made his debut in the comedy film Women Talking Dirty (1999). He is known for his starring roles in the films Finding Neverland (2004), Charlie and the Chocolate Factory (2005), August Rush (2008) and The Spiderwick Chronicles (2008). He won two consecutive Critics' Choice Movie Awards for Best Young Performer.

Highmore starred as Norman Bates in the drama-thriller series Bates Motel (2013-2017), for which he was nominated three times for the Critics' Choice Television Award for Best Actor in a Drama Series and won a People's Choice Award. In 2017, Highmore began producing and starring as Dr. Shaun Murphy in the ABC drama series The Good Doctor, for which he was nominated for the Golden Globe Award for Best Actor.[2]

Highmore was born on 14 February 1992 in Camden Town, London, into a show business family.[3] His mother, Sue Latimer, is a talent agent whose clients include actors Daniel Radcliffe and Imelda Staunton, and his father, Edward Highmore, is an actor. He has a younger brother named Bertie.

His home is in Highgate, North London.[4] Highmore was educated at a primary school in Hampstead Garden Suburb near Golders Green in the London Borough of Barnet and at Highgate School, an independent school, followed by Emmanuel College, Cambridge, where he studied Spanish, French and Arabic.[5][6]

Highmore began his acting career with small roles on television at the age of 7. He made his film debut in Coky Giedroyc's comedy Women Talking Dirty (1999), playing the son of a woman (Helena Bonham Carter) who has recently become estranged from her commitment-phobic French lover.[3] In 2001, Highmore played a young King Arthur in the TNT miniseries The Mists of Avalon, a take on the Arthurian legends that depicted the women of Camelot as the real power behind the throne.[3]

In 2001, in the BBC miniseries Happy Birthday Shakespeare, he portrayed a young boy who dreams of moving his family to Stratford-upon-Avon.[3] Highmore has acted alongside members of his family in two separate films; his brother Bertie played his brother in Women Talking Dirty, and his father Edward played his father in Hallmark Entertainment's television film Jack and the Beanstalk: The Real Story (2001).[7]

In 2004, Highmore returned to the big screen for the family adventure film Two Brothers, directed by Jean-Jacques Annaud. He played the son of a French administrator who refuses to believe that his new friend, a tiger cub, might be dangerous after having tasted blood. He next had a major role alongside Kenneth Branagh, Zoë Wanamaker and Eddie Izzard in the fantasy film Five Children and It (2004). That same year, Highmore made his breakthrough with a critically acclaimed performance as troubled Peter Llewelyn Davies in Marc Forster's semi-biographical film Finding Neverland. He received several awards and nominations for the role, including a Critics' Choice Movie Award for Best Young Performer, and nominations for the Saturn Award for Best Performance by a Younger Actor and the Screen Actors Guild Award for Outstanding Performance by a Male Actor in a Supporting Role.

2005-2011: Charlie and the Chocolate Factory and The Spiderwick Chronicles

In 2005, he portrayed the main role of Charlie Bucket in Tim Burton's musical fantasy film Charlie and the Chocolate Factory, adapted from the book of the same name by Roald Dahl.[8] He was reportedly recommended by co-star Johnny Depp, with whom Highmore had worked in Finding Neverland; Depp had been impressed by the young actor's performance and thus put his name forward for the role.[3] Highmore had not seen the original 1971 version of the film, and decided not to see it until he was done filming so his portrayal of Charlie would not be influenced. For his role, he again won the Critics' Choice Movie Award for Best Young Performer and was awarded the Satellite Award for Outstanding New Talent. Highmore also lent his voice to the film's accompanying video game of the same name.

He next appeared as a young Max Skinner in Ridley Scott's comedy-drama film A Good Year, which was released in the UK on 27 October 2006. Also in 2006, he began portraying protagonist Arthur Montgomery in the live-action/animated fantasy adventure film Arthur and the Invisibles, released on 13 December 2006. Two sequels followed: Arthur and the Revenge of Maltazard (2009) and Arthur 3: The War of the Two Worlds (2010).[9] For the third film and the trilogy's accompanying video game, Highmore provided voice acting.[10] In 2007, he lent his voice to the adventure fantasy film The Golden Compass (2007) and its video game of the same name. He then portrayed the title character in the drama film August Rush (2007), alongside Keri Russell, Jonathan Rhys Meyers, and Robin Williams. The story follows a musical prodigy as he searches for his birth parents. This film received a wide release on 21 November 2007.[11]

Highmore next starred in the dual role of American twins Simon and Jared Grace, alongside Sarah Bolger as their sister Mallory, in the fantasy adventure film The Spiderwick Chronicles (2008), based on the popular children's stories of the same name by Tony DiTerlizzi. The film also had a video game, The Spiderwick Chronicles, in which Highmore reprised the characters of Simon and Jared in a voice role.[12] That same year, he provided voice acting for the role of Little Jack in the animated film A Fox's Tale (2008). In 2009, Highmore voiced the lead character in the animated film Astro Boy,[13] and provided his voice to its accompanying video game, Astro Boy: The Video Game.[14] He then played the main role in Toast, a BBC autobiographical film about chef Nigel Slater, which was aired on 30 December 2010. The miniseries marked the third time Highmore has worked with Helena Bonham Carter.[15] Also in 2010, he starred as Hally Ballard, opposite Ving Rhames, in the drama film Master Harold...and the Boys, based on the play of the same name by Athol Fugard. The following year, he co-starred alongside Emma Roberts in the romantic comedy-drama The Art of Getting By (2011).[16]

Highmore at PaleyFest for Bates Motel, 10 May 2013

In 2013, Highmore voiced the title character in the animated adventure film Justin and the Knights of Valour. From 2013 to 2017, he portrayed the iconic role of Norman Bates, alongside Vera Farmiga as his mother Norma, in the A&E drama-thriller series Bates Motel, a prequel to the Alfred Hitchcock film Psycho that restarts the storyline in the present day.[17] He won a People's Choice Award in 2016 for his performance,[18] and has received nominations for the Saturn Award for Best Actor on Television (2013),[19] the Satellite Award for Best Actor - Television Series Drama (2013),[20] and the Critics' Choice Television Award for Best Actor in a Drama Series (2014-2015, and 2017).[21][22][23] Highmore ventured into writing and directing during his time working on the series, writing the fourth season episode "Unfaithful"[24] and the fifth season episode "Inseparable", and directing the fifth season episode "The Body".[25]

In August 2014, it was reported that NBC had purchased a comedy pilot script written and executive produced by Highmore and Bates Motel showrunner Kerry Ehrin. However, the pilot was not picked up to series.[26] In 2015, he appeared in the Libertines' music video for "You're My Waterloo", alongside Marama Corlett.[27] In 2016, Highmore starred in Stephen Poliakoff's BBC Two seven-part miniseries Close to the Enemy,[28] the coming-of-age comedy-drama film Almost Friends,[29] and Nick Hamm's political comedy-drama film The Journey.[30] The following year, he began the lead role of Dr. Shaun Murphy in the ABC drama series The Good Doctor, on which he also serves as a producer.[31][32] In 2017, he received a nomination for the Golden Globe Award for Best Actor in a Drama Series for his performance.[33]

Highmore has been cast as the voice of the Duke of Cheshire in the animated film adaptation of The Canterville Ghost.[34] He is attached to play the title character, Baby Face Nelson, in the A&E drama pilot Baby Face, which he co-wrote and will executive produce with Kerry Ehrin.[35] Highmore will also executive produce Ehrin's drama pilot Long Distance for NBC.[36]

Highmore lives in London and avoids social media.[37] He is close friends with his Bates Motel co-star Vera Farmiga, and is godfather to Fynn, her son with her husband Renn Hawkey.[38]