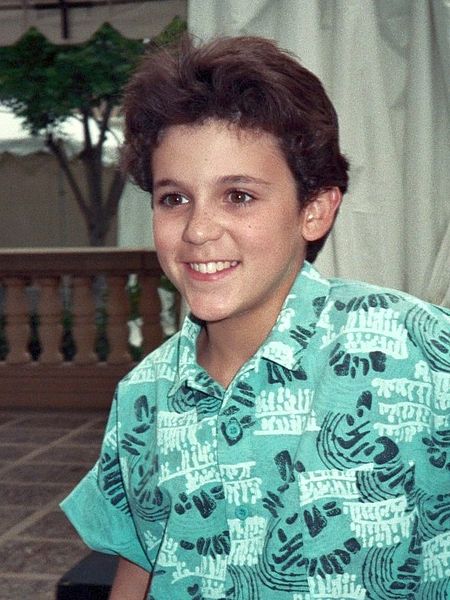 Frederick Aaron Savage (born July 9, 1976)[1] is an American actor, director, and producer.[2] He is best known for his role as Kevin Arnold in the American television series The Wonder Years, which ran from 1988 to 1993. He has earned several awards and nominations, such as People's Choice Awards and Young Artist Awards.

Savage was born in Chicago, Illinois, the son of Joanne and Lewis Savage, who was an industrial real estate broker and consultant.[1] Savage grew up in Glencoe, Illinois, before moving to California. His younger brother is actor Ben Savage, and his younger sister is actress/musician Kala Savage. His grandparents were Jewish immigrants from Poland, Ukraine, Germany, and Latvia.[3] He was raised in Reform Judaism.
Read more...

Savage was educated at Brentwood School, a private co-educational day school in Brentwood, in the Westside area of Los Angeles County in California. He graduated from Stanford University in 1999, with a bachelor's degree in English and as a member of Sigma Alpha Epsilon.

Savage's first screen performance was in the television show Morningstar/Eveningstar, at age 9. He then appeared onscreen in The Boy Who Could Fly, Dinosaurs! - A Fun-Filled Trip Back in Time!, and several television shows, including The Twilight Zone and Crime Story before gaining national attention as the grandson in the 1987 film The Princess Bride opposite Peter Falk.

In 1988, Savage appeared as Kevin Arnold on The Wonder Years, the role for which he is best known, and for which he received two Golden Globe nominations and two Emmy[4] nominations for Outstanding Lead Actor in a Comedy Series. At the age of thirteen he was the youngest actor ever to receive these honors. He remained on the show until it ended in 1993. During this period, he appeared in several films, most notably Vice Versa (1988), and also starred in Little Monsters. After The Wonder Years ended, Savage returned to high school at age 17, and later attended Stanford. His first TV role after high school was the NBC sitcom Working, which Savage starred in for its two-season run.[5] Savage also had a series of guest and supporting roles in the late 1990s and 2000s such as the show Boy Meets World (which starred his younger brother Ben Savage) and in the film Austin Powers in Goldmember as The Mole.

Savage has lent his voice to several animated projects, including Family Guy, Kim Possible, Justice League Unlimited, Oswald, and Holidaze: The Christmas That Almost Didn't Happen. His two lead roles since The Wonder Years were on the short-lived sitcoms Working and Crumbs. He appeared as a serial rapist on a 2003 episode of Law & Order: Special Victims Unit and as a womanizing professor on Boy Meets World. He ranked at #27 on VH1's 100 Greatest Kid Stars.

In July 2008, Savage guest-starred in the web series The Rascal on Crackle.[6]

In 2015, Savage returned to acting with the Fox series The Grinder.[7] Producer Nick Stoller approached Savage about playing the role of Stewart on The Grinder.[7] Savage was uninterested at first, but agreed to meet with the producers of the series because his children attended school with Stoller's children.[7] Savage eventually agreed to take on the role.[7] The Grinder was canceled by Fox on May 16, 2016.[8]

In 2017, he joined the cast of the Netflix series Friends From College as Max Adler, a gay literary agent.[9]

In 2018, he began to host Child Support (originally called Five to Survive) with Ricky Gervais.

In 1999, Savage began his directing career in which he helmed episodes of over a dozen television series. Savage's first directing credit was on the short-lived NBC sitcom Working which also starred Savage.[10] Following Working, Savage began observing production on the Disney Channel show Even Stevens to further learn the craft of directing.[10] Savage also learned by shadowing Amy Sherman-Palladino, Todd Holland, and James Burrows.

His credits include Boy Meets World, Drake & Josh and Ned's Declassified for Nickelodeon, as well as That's So Raven, Hannah Montana, and Wizards of Waverly Place for Disney Channel. Additionally, Savage has directed for prime-time network sitcoms including Modern Family and 2 Broke Girls.[10]

Besides directing several episodes, Savage co-produced the Disney Channel Original Series Phil of the Future. In 2007, he was nominated for a Directors Guild award for the Phil episode "Not-So-Great-Great Grandpa".

Savage has served as a producer for several episodes of It's Always Sunny in Philadelphia, Friends with Benefits, Party Down, Phil of the Future, The Crazy Ones, and Happy Endings.

In 2007, he made his feature film directing debut with the film Daddy Day Camp.[10]