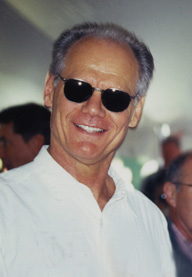 He played for 13 years in the NFL, in 176 games starting in 1969, and recorded 104 career sacks with the New York Giants and Los Angeles Rams. He is the only NFL player to score two safeties in one game.

Following his retirement from football, Dryer had a successful career as a film and television actor, notably starring in the series Hunter. His height of 6 ft 6 in (1.98 m) and physique are useful for his action roles.

Dryer was inducted to the El Camino C.C. Athletic Hall Of Fame in 1988, as a charter member[1] and was the Athlete of the Year for his 1966 performance on the football field. Dryer was also a 1966 Junior College All-American.[2]

During Dryer's junior and senior seasons at San Diego State, in which he lettered both seasons, the Aztecs had a combined record of 19-1-1. They were the College Division National Champions in both seasons. In 1967 they topped both the Associated Press and United Press International polls as #1. In 1968 San Diego State was voted the champions by UPI and North Dakota State topped the AP poll, and thus the two schools shared the College-Division title.

Dryer was voted the outstanding defensive lineman on the team and as such was the recipient of the Byron H. Chase Memorial Trophy.[3]

One of Dryer's teammates was Carl Weathers, who played Apollo Creed in the first four films of the Rocky series. In 1967, the Aztecs allowed 12.9 points a game on defense, which is still ninth in SDSU history. In 1967 and 1968 the Aztec run defense allowed just 80.1 and 100.1 yards per game, still fourth and fifth, respectively in school annals after nearly forty years.[4]

Dryer was named to the Little All-America team in 1968 since at the time the school was 1-AA. Dryer played in the East-West Shrine Game in San Francisco, the Hula Bowl in Honolulu and the College All-Star Game in Chicago where the college stars played the world champion New York Jets.[5]

Dryer was a vegetarian for 10 years. In 1988, Dryer was inducted into the San Diego State University Aztec Hall of Fame.[6]

In 1997, Dryer received college football's ultimate honor in being voted to the College Football Hall of Fame and is one of only three SDSU Aztecs in the collegiate Hall of Fame. When voted into the San Diego Sports Hall of Fame in 1998, he joined athletes such as Ted Williams, Dan Fouts, Dave Winfield, and Tony Gwynn in receiving the preeminent recognition for a San Diego athlete.[7]

Dryer was drafted in the first round of the 1969 NFL Draft by the New York Giants and won a starting job as a rookie. He was the starting right defensive end from 1969 through 1971. He led the team in quarterback sacks each of those three seasons with 8½ in 1969, 12 in 1970 and 8½ in 1971. He was among the defensive leaders in other categories as well. In 1969, he tallied 58 tackles (39 solo), six passes deflected and forced two fumbles and recovered two.

The next season Dryer was an alternate to the Pro Bowl but could not play due to a bruised hip. He was Second-team All-NFC after recording 69 tackles (53 solo) four pass deflections, three forced fumbles, while recovering two to go along with his 12 sacks. In 1971, he again led the team with 8½ sacks, and totaled 62 tackles (33 solo). He deflected two passes, forced two more fumbles and recovered two for the third consecutive season.[8]

Dryer was traded to the New England Patriots in February 1972 for three draft choices (a first, second, and sixth), but refused to report to the Patriots and left New England with only one option thus dealing him to the Los Angeles Rams on draft day of that year for a first round draft pick and backup defensive end Rick Cash. In his first year with the Rams he backed up left defensive end Jack Youngblood making only four starts but playing in every game despite a broken hand and broken nose. His primary role in 1972 was to come in on likely passing downs and rush the passer. He had 40 tackles (17 solo) and 4½ sacks.[citation needed]

In 1973, Dryer started all 14 games on the right side and became the only NFL player ever to have two safeties in the same game by dumping opposing passers in the end zone twice in the fourth quarter. He ended the season with 10 sacks, 3 forced fumbles and recovered 3 fumbles (all three were second on the top-ranked Rams defense). After the season, he was a Second-team All-NFC pick by Pro Football Weekly. He finished the season with 39 tackles (21 solo) s passed knocked down, three forced fumbles and three fumbles recovered.[citation needed]

In 1974, he had 15 sacks, which co-led (with Youngblood) the NFL (unofficially, sacks were not officially recognized by the NFL until 1982) and was voted the Rams Outstanding Defensive Lineman and was named All-Pro and All-NFC. Statistically, he had another solid year versus the run, totaling 49 tackles (34 solo) and two forced fumbles.[citation needed]

Dryer scored his first NFL touchdown in 1975 on a 20-yard interception return against Philadelphia. After scoring his touchdown against the Eagles, Dryer promised that if he ever scored another, he would set his hair on fire in the end zone. Against the Eagles that day, he chose to celebrate by "rolling six", a touchdown celebration where the player scoring rolls the ball like an imaginary pair of dice with some of his teammates looking on. He ended 1975 with 12 sacks, behind only Jack Youngblood and was voted All-NFC. Additionally, Dryer played in the 1975 Pro Bowl, was a Second-team All-Pro selection as well. Statistically, Dryer was excellent against the run with 61 tackles (39 solo) and two passes deflection, two fumbles recovered to go along with the 20-yard TD interception.

Due to rule changes in NFL offensive line Dryer's play started to decline some. Always a small player, the new rules heavily favored larger players. Dryer coped with a 55-tackle, 5-sack season (33 solo). He did deflect two passes and forced three fumbles in 1976 which were along the team leaders. In 1977 Dryer adopted a new diet and was winning praises from NFL sportswriters for the start he had. He recorded 35 tackles (28 solo) and 6 sacks. He also knocked down four passes, recovered three fumbles and caused one fumble. The next season, 1978 was much of the same. Dryer was the starting right defensive end on the NFL's #1 defense. Personally, he had 51 tackles (33 solo) and forced two fumbles, recovered three, blocked a kick and blocked one pass en route to a Ram record of 12-4.

He played in Super Bowl XIV when the Rams met the Pittsburgh Steelers after the 1979 season. That season, he was honorable mention All-NFC after recording 49 tackles (31 solo) 10 sacks and three forced fumbles and recovered one. Against the New York Giants on October 28, 1979, Dryer recorded a career-high 5 sacks. In 1980 Dryer split the time at his right defensive end position with third-year player Reggie Doss. They combined for 67 tackles (Dryer 31, 20 solo) and 12 sacks (Dryer 5½, Doss 6½).

Dryer ended his career with 104 career sacks, although since he played prior to 1982 when sacks became an official statistic they are not credited in the NFL record books. Dryer played on a tough Los Angeles Ram defense that during the decade of the 1970s, allowed fewer points, fewer total yards, fewer rushing yards, and sacked more quarterbacks than any other defense during that time-frame.[8]

In January 1981, Dryer made the cover of Interview magazine, published by Andy Warhol from the late 1960s through the early 1990s and was considered the very essence of "magazine chic". In 2003 the NFL Alumni presented Dryer with its Career Achievement Award which is presented to former NFL players "For Getting to the Top of His Field".[citation needed]

Dryer's record-setting game on October 21, 1973, at Los Angeles was a 24-7 win over Green Bay. Down 20-7 in the fourth quarter, the Packers found themselves deep in their own territory when Dryer came storming in from the right side of the defense and chased down Green Bay quarterback Scott Hunter, dropping him in the end zone for a safety.

On the Packers' following possession near their own goal line, Dryer attacked again. He looped through the middle of the Packers' offensive line and dragged backup quarterback Jim Del Gaizo down for his second safety of the game, setting a new NFL record.[9] For his efforts, Dryer was named the Associated Press NFL Defensive Player of the Week.[10]

Prior to the start of his show business career, Dryer flexed his acting muscles when he helped cover Super Bowl IX for SPORT magazine. Fed up with the grandiose and self-important nature of the NFL's championship match, then-editor Dick Schaap hired Dryer and Rams teammate Lance Rentzel for this journalistic assignment. Donning costumes inspired by The Front Page, "Scoops Brannigan" (Dryer) and "Cubby O'Switzer" (Rentzel) peppered players and coaches from both the Pittsburgh Steelers and Minnesota Vikings with questions that ranged from clichéd to downright absurd. This became the inspiration for the eccentricities that surround Media Day at the Super Bowl.[11][12] He briefly served as a color analyst on CBS's NFL coverage in 1982.[citation needed]

In the early 1980s when producers/creators Glen and Les Charles, and James Burrows were developing the soon-to-be hit sitcom, Cheers, Dryer, along with two other actors, was considered for the role of lead character, Sam Malone. Ted Danson ultimately won the role, but Dryer later appeared as sportscaster (and former Red Sox teammate of Sam's) Dave Richards in the episodes "Sam at Eleven", "Old Flames", "Love Thy Neighbor", and "'I' On Sports". He appeared on CHiPs in the Season 5 episode Force Seven.[citation needed]

Dryer's best-known acting role came in the 1980s television crime drama Hunter, in which he co-starred with Stepfanie Kramer, followed by Darlanne Fluegel, then Lauren Lane. Dryer also starred in the action-thriller movie Death Before Dishonor as well as Mike Land in the TV series Land's End (21 episodes, 1995-1996). He portrayed Sgt. Rock during his appearance on Justice League.[13][14]

He married actress and Playboy centerfold Tracy Vaccaro in May 1983; the couple divorced in 1988.[15] Together, they have at least one daughter. Dryer still resides in Los Angeles and has his own production company (Fred Dryer Productions).[15]

In January 2009, Dryer was seen in a cable TV commercial for SMS research company,[16] which obliquely makes reference to his NFL record of two safeties in a game from 1973. Dryer is also now a spokesman for the law service Injury Solutions.[17]

He starred in the drag racing film Snake and Mongoose, which depicts the rivalry between drivers Don "The Snake" Prudhomme and Tom "The Mongoose" McEwen and their groundbreaking accomplishments in the world of drag racing.[18] Dryer played "Ed Donovan", McEwen's engine builder, who coined the nickname "Mongoose".[19]

Dryer appeared in the NBC series Crisis in 2014. In 2015, Dryer joined the ranks of the Marvel Cinematic Universe when he played the evil HYDRA leader, Octavian Bloom, in an episode of Agents of S.H.I.E.L.D.[20] On October 23, 2018, he played a Vietnam veteran on the CBS show NCIS.[citation needed][21]