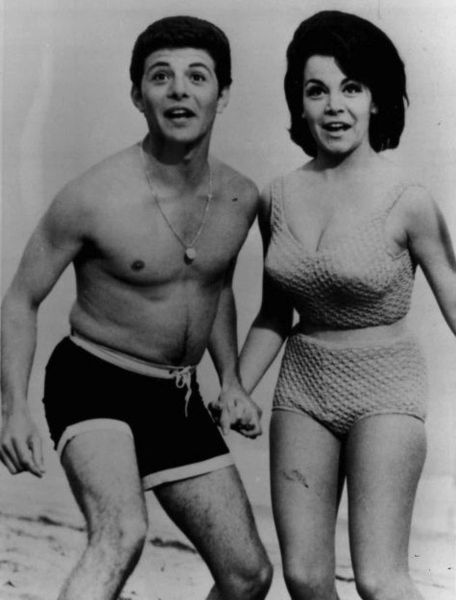 Avalon was born in Philadelphia, the son of Mary and Nicholas Avallone.[5]

In December 1952, Avalon made his American network television debut playing the trumpet in the Honeymooners "Christmas Party" sketch on The Jackie Gleason Show. Two singles showcasing Avalon's trumpet playing were issued on RCA Victor's "X" sublabel in 1954.[6] His trumpet playing was also featured on some of his LP songs as well. As a teenager he played with Bobby Rydell in Rocco and the Saints.[citation needed]

Avalon and Funicello during the "Beach Party" era

Avalon's first film was a short appearance in Jamboree (1957), playing a trumpet and singing "Teacher's Pet".

In the late 1950s, teen idols were often given roles in films, supporting older male stars in order to attract a younger audience, such as Ricky Nelson in Rio Bravo (1959). Alan Ladd's daughter was a Frankie Avalon fan, who recommended that he co-star with her father in the Western Guns of the Timberland (1960).[8] Avalon sings two songs, "The Faithful Kind" and "Gee Whiz Whillikins Golly Gee"; both were released as singles.

Ladd announced he would reteam Avalon and his daughter in Six Steps to Freedom but the film was never made.[9]

Rushes for Timberland were seen by John Wayne, who was looking for a young actor to play the (fictitious) role of "Smitty" in his passion project, The Alamo (1960). Avalon was cast in his second dramatic part.[10] After making the film Wayne told the press "We're not cutting one bit of any scene in which Frankie appears. I believe he is the finest young talent I've seen in a long time."[11] "Mr Wayne said I was natural as far as acting goes," said Avalon.[12] He added, "My ambition when I was ten years old was to have my own band like Harry James. I never expected anything like this... I'd like to be identified as a singer, dancer and actor. I don't want to be just one thing."[12]

Avalon was now in demand as an actor. He provided the singing voice for the lead character in the English language version of a Japanese musical anime, Alakazam the Great (1960), which was done at the behest of the US distributor, American International Pictures - the first in what would be a long association with that company.

For Irwin Allen, Avalon had a small role and sang the title role in the science fiction adventure film, Voyage to the Bottom of the Sea (1961), a solid hit. He had a support role in a comedy, Sail a Crooked Ship (1961).

Avalon was teamed with Ray Milland in the science fiction film, Panic in Year Zero! (1962), written by Lou Rusoff. Samuel Z. Arkoff of American International Pictures (AIP) said Avalon and Milland were teamed together because "they both have particular types of followers and the combination adds up to an attraction."[14]

For AIP, Avalon made a war movie with Tab Hunter, Operation Bikini (1963), singing a few songs in flashback. At MGM he played the lead in an adventure film set in Africa, Drums of Africa (1963).

Of more significance for Avalon's career was a project originally written by Rusoff, Beach Party (1963). This cheerful musical comedy starred Annette Funicello and was directed by William Asher; Arkoff said AIP originally wanted Fabian Forte to co-star with Funicello, but when he proved unavailable they went with Avalon. It was a big hit and led to several sequels.

Avalon received an offer to appear in a swashbuckler set in 10th century Spain about Fernán González of Castile, The Castilian (1963), then was in the first Beach Party sequel, Muscle Beach Party (1963). It was popular; even more so was Bikini Beach (1964), where Avalon had a dual role. In August 1964 Avalon announced he signed to make ten films in five years for AIP.[15]

Pajama Party (1964) was unofficially the fourth in the series; it was a science fiction spoof, Avalon ceded leading man duties to Tommy Kirk, but he had a cameo. He was back as leading man in Beach Blanket Bingo (1965). Avalon later recalled, "'That's the picture of mine that I think people remember best, and it was just a lot of kids having a lot of fun -- a picture about young romance and about the opposition of adults and old people... It was also fun because we got to learn how to fake skydive out of an airplane."[16]

Avalon appeared in nearly two dozen TV episodes, including ABC's The Bing Crosby Show and The Patty Duke Show, appearing often as himself. Later, he became a national television spokesperson for Sonic Drive-In. In 1965 he appeared in the Combat! episode "Brother, Brother" as a childhood friend of Pfc.Kirby, played by Jack Hogan.

Avalon and Tuesday Weld supported Bob Hope in a comedy, I'll Take Sweden (1965) for Edward Small. For AIP he teamed with Dwayne Hickman in a rip off of Some Like It Hot (1959), Ski Party (1965). That studio gave him the lead in a service comedy, Sergeant Deadhead (1965), playing another dual role. All this activity meant he was reluctant to appear in another "beach party" movie, so he let Hickman play the lead in How to Stuff a Wild Bikini (1965), although Avalon had a cameo.

The box office performance of these last few films were disappointing - especially Sergeant Deadhead, for which sequels had been planned.[17] More popular was Dr. Goldfoot and the Bikini Machine (1965), a comedy with Vincent Price and Hickman, for AIP. This was liked enough to justify a sequel, although Avalon did not appear, Fabian Forte taking over.

AIP tried to find a new formula for Avalon, and cast him as a stock car driver in Fireball 500 (1966), alongside Fabian and Funicello, for director William Asher. It was a medium success, and led to other AIP stock car movies, though none with Avalon.

For Harry Alan Towers he played the lead in The Million Eyes of Sumuru (1967), and had a good part in Skidoo (1968), a comedy from Otto Preminger. In England he was in The Haunted House of Horror (1968) for AIP.

In 1976, Avalon updated his song "Venus" with a new disco treatment.[citation needed]

Materializing as a character called Teen Angel, his performance of "Beauty School Dropout" in the hit 1978 film of the musical Grease introduced Avalon to a new generation of viewers.[3]

The 1980 film The Idolmaker, written by Ed Di Lorenzo and directed by Taylor Hackford, was a thinly-disguised biography of Avalon ("Tommy Dee" in the film) as well as 1950s teenage star Fabian Forte (called "Caesare" in the film), along with songwriter/producer Bob Marcucci (called "Vinnie Vacarri"). In the film, Dee clashes with the record producer and younger singer Caesare, who he feels threatens his career. Eventually, Dee and Caesare quit the label, but their record careers collapse just as the British Invasion begins. The real Fabian threatened a lawsuit, despite the filmmakers' insistence that the film presented only fictional characters (though Marcucci was a paid consultant). Avalon denied most of the film's events.

Avalon had the idea of returning to beach party films with Funicello. He hired several screenwriters and shopped the screenplay around town, eventually managing to set up the project at Paramount Pictures. Back to the Beach (1987) was a moderate success. [18]

In 1989, Avalon and Funicello appeared as themselves in cameo roles out jogging the streets in Troop Beverly Hills. Not long afterwards, Funicello was diagnosed with multiple sclerosis and retired.

Afterwards, Avalon turned to marketing and created Frankie Avalon Products, a line of health and cosmetic aids. Avalon promotes his products on the Home Shopping Network with host Bob Circosta.

Avalon made a cameo appearance as himself with Robert De Niro in the 1995 film, Casino.[3]

In recent years, Avalon has starred in stage productions of Grease in the role of Teen Angel and Tony n' Tina's Wedding as a caricature of himself. Additionally, in 2007, he performed "Beauty School Dropout" with the four remaining female contenders (Kathleen Monteleone, Allie Schulz, Ashley Spencer, and winner Laura Osnes) for the role of Sandy on the NBC television reality show Grease: You're the One that I Want!

A cookbook with over 80 recipes from St. Martin's Press, Frankie Avalon's Italian Family Cookbook, was published in 2015.

Avalon married Kathryn "Kay" Diebel on January 19, 1963.[19] She was a former beauty pageant winner, and Avalon met her while playing cards at a friend's house. He told his friend that Kay was the girl he was going to marry. His agent warned Avalon that marriage would spoil his teen idol mystique. They have eight children - Frankie Jr., Tony, Dina, Laura, Joseph, Nicolas, Kathryn and Carla. They have 10 grandchildren. Frankie Avalon Jr. is a former actor who appeared in the original The Karate Kid and is now a musician, and Tony, the second oldest son, plays guitar and taught at the Rock Nation School. Both sons play on tour with their father.[citation needed]

Avalon was mentioned in the System of a Down song "Old School Hollywood". The song supposedly is about Daron Malakian's experience in a celebrity baseball game, where he and Avalon were both ignored.[citation needed]

Avalon is also mentioned in "It Takes Two", a song from the hit musical Hairspray, sung by the character Link Larkin, and in a song by the Wu-Tang Clan called "The City" which refers to his experiences of being a big part of the beach party film genre ("Ride the wave like Frankie Avalon").

One of numerous obscure cultural references present in Midway's video game Mortal Kombat 3 was a lo-res image of Frankie Avalon's face that would dart up in the lower right-hand corner of the screen when Goro killed his opponent by knocking him into the spike pit on the Bridge level.

His song "Venus" was featured in Cranium Command (1989-2005), an attraction at Epcot's Wonders of Life Pavilion (now closed) at Walt Disney World. In the attraction, a 12-year-old boy named Bobby (Scott Curtis), tries to survive the pressures of life and falls in love with a beautiful girl named Annie (Natalie Gregory) at school.

Avalon and his song "Venus" are mentioned in Wendy Wasserstein's 2005 play Third. The main character, English professor Laurie Jameson, watches a PBS reunion show featuring Avalon singing the song, and sings a line of it to her daughter. In stage productions of the show, part of the song is played and a portion of the supposed PBS special is screened as part of the scenery.

Avalon is also referenced in the 1994 film, The Stöned Age, in which he makes an ending scene cameo appearance.

His song "Venus" additionally appeared in season 4 of the TV series Dexter in which John Lithgow's character, Arthur Mitchell, plays it to remember his deceased sister. Also, "Venus" is sampled in Nick Bertke's, single, "J'Adore Juin", a mashup of sounds from the movie The Apartment. "Venus" also appeared in the 2016 film 10 Cloverfield Lane starring John Goodman.

Avalon is also mentioned in The Vaccines' song "Teenage Icon".