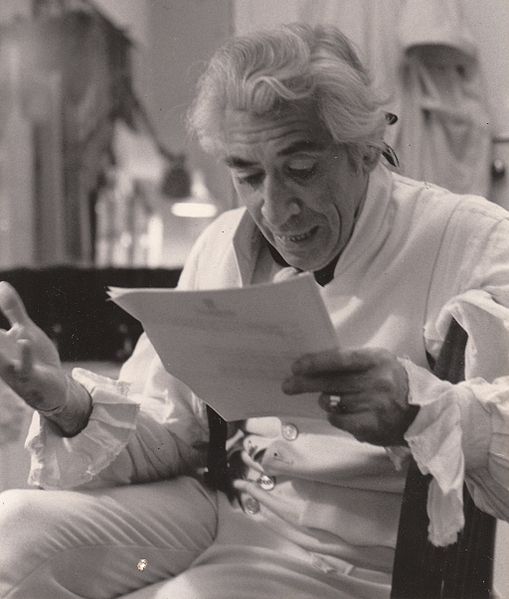 Francis Finlay, CBE (6 August 1926 - 30 January 2016), known as Frank Finlay, was an English stage, film and television actor. He was Oscar-nominated for his supporting role in Olivier's 1965 film of Othello and got his first leading role on television in 1971 as Casanova,[1] which led to appearances on The Morecambe and Wise Show.[2] He also appeared in the controversial drama Bouquet of Barbed Wire.[3]

Finlay was born in Farnworth, Lancashire, the son of Margaret and Josiah Finlay,[4] a butcher. He was educated at St Gregory the Great School, but left at the age of 14 to train as a butcher himself at the family firm,[5] gaining a City and Guilds Diploma in the trade.
Read more...

Finlay made his first stage appearances at the local Farnworth Little Theatre, in plays that included Peter Blackmore's Miranda in 1951. The current Little Theatre president, also in the cast of that Miranda production, remembers him as a perfectionist in his craft. He also played in rep, initially in Scotland, before winning a scholarship to RADA in London.[5]

There followed several parts in productions at the Royal Court Theatre, such as the Arnold Wesker trilogy. He became particularly associated with the National Theatre, especially during the years when Laurence Olivier was director. Playing Iago opposite Olivier's title character in John Dexter's 1965 production of Othello,[6] and the 1965 film adaptation Othello of that production (also 1965), Finlay's performance as Iago left theatre critics unmoved, but he later received high praise for the film version and he gained an Academy Award nomination.[7] The critic John Simon wrote that the close-ups in the film afforded Finlay the chance to give a more subtle and effective performance than he had on stage.

At the Chichester Festival Theatre, he played roles ranging from the First Gravedigger in Hamlet to Josef Frank in Weapons of Happiness. He also had parts in The Party, Plunder, Saint Joan, Hobson's Choice, Amadeus (as Salieri), Much Ado About Nothing (as Dogberry), The Dutch Courtesan, The Crucible, Mother Courage, and Juno and the Paycock.

Finlay also made appearances on Broadway, in Epitaph for George Dillon (1958-59) and in the National Theatre and Broadway productions of Filumena (opposite Olivier's wife, Joan Plowright) in 1980.[8]

Between November 1988 and April 1989, Finlay toured Australia, performing in Jeffrey Archer's Beyond Reasonable Doubt at theatres in Sydney, Melbourne and Adelaide.[9]

One of his earliest television roles was in the family space adventure serial Target Luna (1960), as journalist Conway Henderson. Finlay's first major television success on was in the title role of Dennis Potter's BBC 2 series Casanova (1971). Following this, he portrayed Adolf Hitler in The Death of Adolf Hitler (1972) for London Weekend Television.

Finlay portrayed Richard Roundtree's nemesis, Amafi, in Shaft in Africa (1973), before playing Porthos for director Richard Lester in The Three Musketeers (also 1973), The Four Musketeers (1975) and The Return of the Musketeers (1989). He appeared in several additional films, including The Wild Geese (1978).

Finlay starred as the father in the once controversial Bouquet of Barbed Wire (1976), and its sequel Another Bouquet (1977), and he was reunited with his Bouquet of Barbed Wire co-star, Susan Penhaligon, when he played Professor Van Helsing in the BBC Count Dracula (also 1977), with Louis Jourdan. He appeared in two Sherlock Holmes films as Inspector Lestrade, solving the Jack the Ripper murders (A Study in Terror, 1965, and Murder by Decree, 1979). He also played a role in an episode of the Granada Television adaptation of Sherlock Holmes starring Jeremy Brett, in which his son Daniel played a minor role as well. Finlay appeared on American television in A Christmas Carol (1984) playing Marley's Ghost opposite George C. Scott's Ebenezer Scrooge. He also guest-starred as the title character in an episode of The Black Adder ("The Witchsmeller Pursuivant", 1983).

Finlay played Sancho Panza opposite Rex Harrison's Don Quixote in the 1973 British made-for-television film The Adventures of Don Quixote,[10] for which he won a BAFTA award.[11] He won another BAFTA award that year for his performance as Voltaire in the BBC TV production of Candide.[citation needed]

Finlay played the role of Justice Peter Mahon in the award-winning New Zealand television serial Erebus: The Aftermath (1988). In the Roman Polanski film The Pianist (2002), he took on the part of Adrien Brody's father.

He starred alongside Pete Postlethwaite and Geraldine James in the BBC drama series The Sins in 2000, playing the funeral director "Uncle" Irwin Green. He appeared in the TV series Life Begins (2004-06) and as Jane Tennison's father in the last two stories of Prime Suspect (2006 and 2007). In 2007, he guest-starred in the Doctor Who audio adventure 100. In November 2008, Finlay appeared in the eleventh episode of the BBC drama series Merlin, as "Anhora, Keeper of the Unicorns".

Finlay met his future wife, Doreen Shepherd, when they were both members of the Farnworth Little Theatre. They had three children, Stephen, Cathy and Daniel, and lived in Shepperton, Middlesex. She died in 2005 aged 79.[5] A devout Roman Catholic,[12] he was a member of the British Catholic Stage Guild (now known as the Catholic Association of Performing Arts).

Finlay was made a Commander of the Order of the British Empire in the New Year's Honours of 1984[13] and received an honorary doctorate from the University of Bolton in 2009.[5]