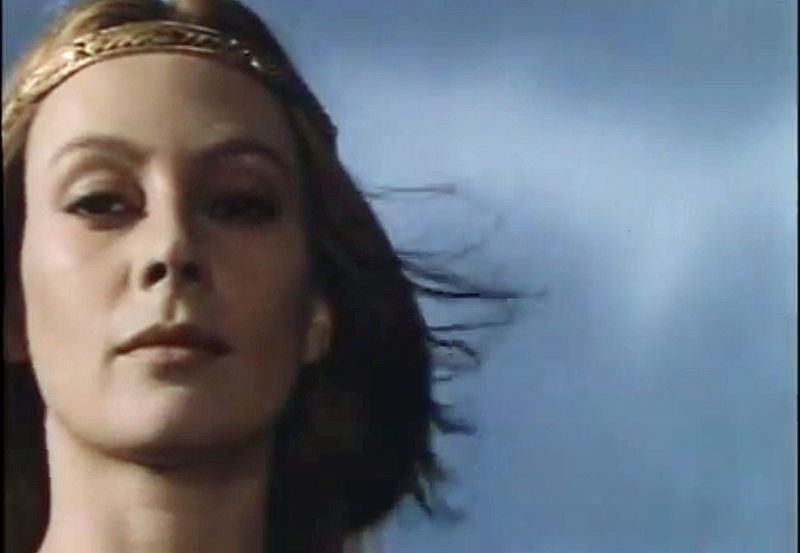 Annis was born in Kensington, London in 1945, to an English father, Lester William Anthony Annis (1914-2001) and a Brazilian-French mother, Mariquita (Mara) Purcell (1913-2009);[citation needed] both were sometime actors and Mara a sometime singer.[2] Mara was from a wealthy Brazilian family;[2] the Annises moved to Brazil when Francesca was one year old, and spent six years there,[citation needed] returning to England when she was seven.[2] In recollecting the years in Brazil, she described her parents as running "a nightclub on Copacabana beach", and her mother Mara "performing as a blues singer".[2]

Annis was educated at a convent school, and trained in her early years as a ballet dancer,[2][3] with training in the Russian style at the Corona Stage Academy.[4]

Annis began acting professionally in her teens, and made her film debut in The Cat Gang (1959). Her first major film role was as Elizabeth Taylor's handmaiden in Cleopatra (1963), in which she was cast at the age of 16 while still studying Russian ballet.[2] Her big break was as one of the leads in the 1965 West End stage musical Passion Flower Hotel.[4] She played Estella in a television adaptation of Great Expectations (1967) and presented children's television programmes. She garnered attention for her performance as Lady Macbeth in Roman Polanski's film version of Macbeth (1971) in which she performs the sleepwalking soliloquy nude. The critic Kenneth Tynan was present when the scene was shot:

"Francesca does it very sportingly and with no fuss ... though of course the set is closed, great curtains are drawn around the acting area ... and the wardrobe mistress rushes to cover Francesca with a dressing gown the instant Roman says, 'Cut'".[5][full citation needed]

Her films have included Krull (1983) and Dune (1984). She appeared as Tuppence with James Warwick as Tommy in Agatha Christie's Partners in Crime (1983-84) stories as well as the preceding The Secret Adversary (1983). She appeared in Onassis: The Richest Man in the World (1988), in which she played Jacqueline Kennedy. She portrayed Mrs. Wellington in the second film and directorial debut by the musician Prince, Under The Cherry Moon (1986).

Annis has also pursued a stage career, playing leading roles with the Royal Shakespeare Company - Luciana in Trevor Nunn's musical version of The Comedy of Errors in 1976, and Juliet in Romeo and Juliet alongside Ian McKellen in 1977.[citation needed] At the National Theatre in 1981, she played Natalya Petrovna in Peter Gill's production of Ivan Turgenev's A Month in the Country.[citation needed] At the Comedy Theatre between September 2005 and January 2006, Annis starred as Ruth in Epitaph for George Dillon with Joseph Fiennes.[6] She returned to the stage in April 2009, to star as Mrs. Conway in Rupert Goold's National Theatre revival of J. B. Priestley's Time and the Conways.[7]

She has appeared in television productions in the 1970s, 1980s and 1990s, appearing in series such as Edward the Seventh (1975) as Lillie Langtry, a role she reprised in Lillie (1978); Madame Bovary (1975); and Parnell and the Englishwoman (1991), in which she played Kitty O'Shea; as well as the miniseries Reckless (1998) and its 2000 sequel. Annis co-starred with Michael Gambon and Dame Judi Dench as Lady Ludlow (an aristocrat opposed to the education of the lower classes) in the BBC1 costume-drama series Cranford (2007). More recently, Annis played a leading role in the ITV drama Home Fires.

Annis was in a relationship with photographer Patrick Wiseman that began in 1974,[2] raising three children, Charlotte, Taran, and Andreas, all of whom were given their father's surname.[citation needed] Annis began a relationship with Hamlet co-star Ralph Fiennes in 1995, ending her 23-year relationship with Wiseman in 1997;[2] Fiennes in turn divorced his wife of four years, Alex Kingston.[8] Annis is said to have "apologised to Wiseman" over their parting.[2] Annis and Fiennes announced their separation on 7 February 2006, after 11 years together,[2][9][10] in a parting described as "acrimonious", following rumours that he had an affair with a Romanian singer.[2]

In an interview with Tim Auld of The Telegraph in 2009, Annis described herself as being one that tends "to forget the bad things - I don't dwell on them. I think, 'Oh, f- it, life's too short,'" and that though single, she "believes it is better to be with someone than alone", stating "I think you live a fuller life... to have someone else's input on anything - a book, a meal, your children, life, a walk - is fantastic" and expressing optimism as she looked to the rest of her seventh decade, stating "'I like to have a big open canvas. I am a glass-half-full person. Something will turn up, you know, and whatever it is it'll be fine.'"[2]