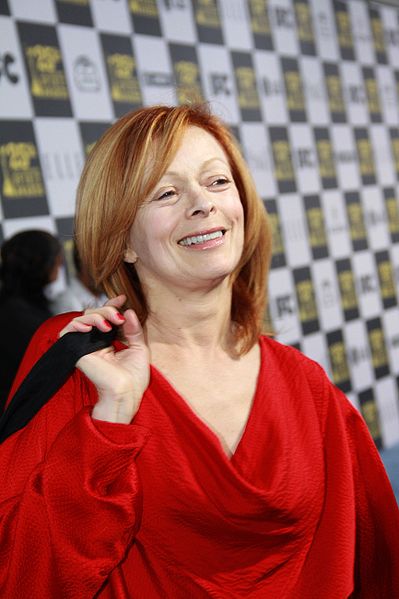 Fisher was born in Milford on Sea, Hampshire, England, the daughter of American parents Olga Rosine (née Moen), a housewife, and William Irving "Bill" Fisher, Sr, an oil refinery construction superintendent.[4] Her father was of Russian-Jewish and Hungarian-Jewish descent, while her mother was of Norwegian ancestry.[citation needed] Before she reached the age of fifteen, she had moved nine times and travelled because of her father's job, going to places like Italy, Turkey, Colombia, France, Canada, and Brazil.[2][5][6] When she was 15, her mother died and she took on the responsibility to help raise her younger brother.[5] She ultimately completed her high school at Lutcher Stark High School[2] in Orange, Texas, where she performed in theatre productions, and later worked as a secretary.[7]
Read more...

Deciding to follow her interest in theatre, she moved to New York City, where she subsequently enjoyed a 14-year stage career in regional and off-Broadway productions. She became involved with the Actors Studio, where she studied with Lee Strasberg.[2] Fisher moved to Abingdon, Virginia, where she began her acting career at the Barter Theatre, a year-round repertory theatre.

During the next 10 years, she concentrated on theatre in New York City and in regional theatres all over the East Coast. She has also returned to theatre; she appeared in Arthur Miller's last play, Finishing the Picture, produced at the Goodman Theatre in Chicago and in a 2006 production of The Cherry Orchard at the Mark Taper Forum in Los Angeles.

Fisher gained recognition playing Detective Deborah Saxon on the ABC daytime soap opera The Edge of Night from 1976 to 1981. She later joined the cast of CBS's Guiding Light as Suzette Saxon in 1985. After leaving daytime television, Fisher guest starred as a bartender, Savannah, at "The Lobo" in the first season of ABC comedy series Roseanne. She also appeared on Newhart, Matlock and In the Heat of the Night.

Fisher was originally cast to play Jill Taylor on the ABC sitcom Home Improvement, but was replaced after initial filming of the pilot episode by Patricia Richardson due to a lack of chemistry with Tim Allen as well as with the studio audience who felt Fisher was too serious in the delivery of her lines.[8][9] In 1991, Fisher was cast as Lucille Ball in the television film Lucy & Desi: Before the Laughter, which aired to strong ratings and good reviews. From 1994 to 1995 she starred in the Fox drama series Strange Luck. In 2000, Fisher portrayed Audrey Hepburn's mother, Ella Hepburn, in the biographical film of the actress. In same year she played the role of Janet Lee Bouvier in Jackie Bouvier Kennedy Onassis.[3]

Fisher had recurring roles in the CBS sitcom Becker as Dr. Elizabeth 'Liz' Carson from 1999 to 2000, and on Fox's Titus as Juanita Titus (2000-2001). In 2002 she starred in the short-lived The WB series Glory Days, and in 2003 starred in another drama cancelled after a single season, The Lyon's Den on NBC.[3] In 2005, she appeared on the ER episode "Just As I Am," as Helen Kingsley, the long-lost birth mother of Dr. Kerry Weaver, played by Laura Innes, even though Fisher is only five years older. She also starred in a pilot for NBC/USA entitled To Love and Die. In 2008, she appeared in a recurring role on the Sci-Fi Channel television series Eureka, portraying the character Eva Thorne.[10] Fisher also guest-starred on Grey's Anatomy, The Shield, Two and a Half Men, Private Practice, Sons of Anarchy, Torchwood, CSI: Crime Scene Investigation, Cold Case, and Castle.[11][12]

In 2014, Fisher was starring in the ABC drama series Resurrection about the residents of Arcadia, Missouri, whose lives are upended when their loved ones return from the dead, unaged since their deaths. She played the role of Lucille Langston.[13]

In 2017, she and her daughter Francesca Eastwood both starred in the acclaimed Fargo episode "The Law of Non-Contradiction" as the older and younger versions of the same character.[14]

Fisher made her film debut in Can She Bake a Cherry Pie? (1983) and later appeared in Patty Hearst directed by Paul Schrader.[3] In 1989 she appeared in Pink Cadillac opposite Clint Eastwood, and the pair began a six-year offscreen relationship.[3] In next year she appeared in Welcome Home, Roxy Carmichael.

In 1992, Fisher had her break-out role in Unforgiven, an Academy Award-winning film directed by Clint Eastwood, who also starred.[3] In later years she began acting regularly in major and independent films. Her most famous role in film was as the society matron Ruth DeWitt Bukater, the mother of the character played by Kate Winslet, in the 1997 blockbuster Titanic. She appeared in True Crime (1999) with Eastwood as D.A.[3]

Fisher had a role in House of Sand and Fog (2003), another Academy Award-nominated film. In 2004, she appeared in Laws of Attraction as Julianne Moore's mother, even though she is only 8 years older. Fisher worked on four films in 2006, including Peter Berg's The Kingdom, and Paul Haggis' In the Valley of Elah. The same year, she appeared in the film Jolene with Jessica Chastain as her lover. She served as an official festival judge for the 2011 Noor Iranian Film Festival in Los Angeles. In 2011, she appeared in The Lincoln Lawyer and The Roommate.[15]

Fisher appeared as Maggie Stryder in the 2013 film The Host with Saoirse Ronan and William Hurt.[16] She also appeared in the films The Potters and You're Not You, both released in 2014.[17]

Fisher appeared in the film Woman in Gold (2015), playing the mother of Randol Schoenberg (Ryan Reynolds).[18]

In 1970, when Fisher was 18, she married her high school sweetheart Billy Mack Hamilton. They divorced two years later.[5]

Fisher was in a relationship with fellow actor Clint Eastwood for six years in the early 1990s. During that time, the couple had a daughter, Francesca Eastwood (b. 1993).[5][19]