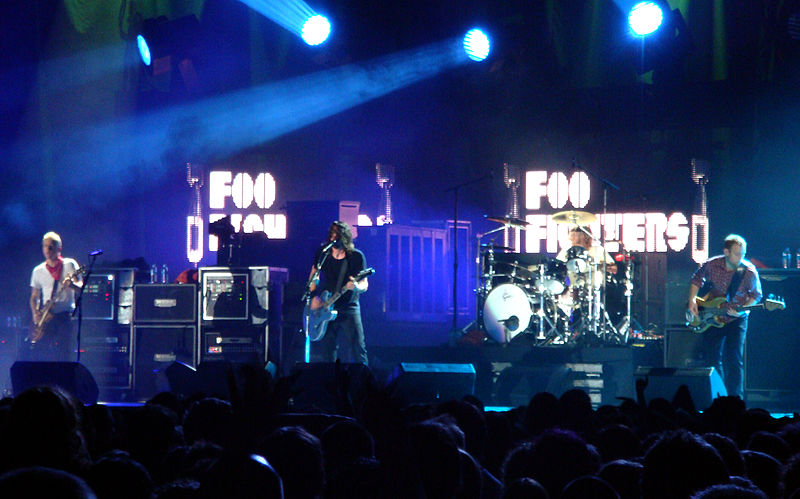 Foo Fighters is an American rock band, formed in Seattle, Washington, in 1994. It was founded by Nirvana drummer Dave Grohl as a one-man project following the dissolution of Nirvana after the suicide of Kurt Cobain. The group got its name from the UFOs and various aerial phenomena that were reported by Allied aircraft pilots in World War II, which were known collectively as "foo fighters".

Prior to the release of Foo Fighters' 1995 debut album Foo Fighters, which featured Grohl as the only official member, Grohl recruited bassist Nate Mendel and drummer William Goldsmith, both formerly of Sunny Day Real Estate, as well as Nirvana touring guitarist Pat Smear to complete the lineup. The band began with performances in Portland, Oregon. Goldsmith quit during the recording of the group's second album, The Colour and the Shape (1997), when most of the drum parts were re-recorded by Grohl himself. Smear's departure followed soon afterward, though he would rejoin them in 2006.

They were replaced by Taylor Hawkins and Franz Stahl, respectively, although Stahl was fired before the recording of the group's third album, There Is Nothing Left to Lose (1999). The band briefly continued as a trio until Chris Shiflett joined as the band's lead guitarist after the completion of There Is Nothing Left to Lose. The band released its fourth album, One by One, in 2002. The group followed that release with the two-disc In Your Honor (2005), which was split between acoustic songs and heavier material. Foo Fighters released its sixth album, Echoes, Silence, Patience & Grace, in 2007. The band's seventh studio album, Wasting Light, produced by Butch Vig, was released in 2011, in which Smear returned as a full member. In November 2014, the band's eighth studio album, Sonic Highways, was released as an accompanying soundtrack to the Grohl-directed 2014 miniseries of the same name. On September 15, 2017, the band released their ninth studio album, Concrete and Gold, which became their second to reach number one in the United States and was the band's first studio album to feature longtime session and touring keyboardist Rami Jaffee as a full member.

Over the course of the band's career, four of its albums have won Grammy Awards for Best Rock Album. As of 2015, the band has sold 12 million copies in the United States alone.[3]

Foo Fighters frontman Dave Grohl joined the grunge group Nirvana as its drummer in 1990. During tours, he took a guitar with him and wrote songs. Grohl held back these songs from the rest of the band; he said in 1997, "I was in awe of, and intimidated. I thought it was best that I kept my songs to myself."[4] Grohl occasionally booked studio time to record demos and covers of songs he liked and even issued a cassette of some of those songs called Pocketwatch under the pseudonym "Late!" in 1992.[5]

Frontman Kurt Cobain was found dead in his Seattle home on April 8, 1994, and Nirvana subsequently disbanded. Grohl received offers to work with various artists; press rumors indicated he might be joining Pearl Jam,[6] and he almost accepted a permanent position as drummer in Tom Petty and the Heartbreakers. Ultimately, Grohl declined and instead entered Robert Lang Studios in October 1994 to record fifteen of the forty songs he had written.[5] With the exception of a guitar part on "X-Static", played by Greg Dulli of the Afghan Whigs, Grohl played every instrument and sang every vocal on the tracks.[7] "I was supposed to just join another band and be a drummer the rest of my life," Grohl later said. "I thought that I would rather do what no one expected me to do. I enjoy writing music and I enjoy trying to sing, and there's nothing anyone can really do to discourage me." Grohl completed an album's worth of material in five days and handed out cassette copies of the sessions to his friends for feedback.[5]

Grohl hoped to keep his anonymity and release the recordings in a limited run under the title "Foo Fighters", taken from the World War II term "foo fighter", used to refer to unidentified flying objects.[5] "Around the time that I recorded the first FF tape, I was reading a lot of books on UFO's. Not only is it a fascinating subject, but there's a treasure trove of band names in those UFO books!" he said. "So, since I had recorded the first record by myself, playing all the instruments, but I wanted people to think that it was a group, I figured that FOO FIGHTERS might lead people to believe that it was more than just one guy. Silly, huh?" Continuing, Grohl insisted that a more appropriate name could have been chosen. "Had I actually considered this to be a career, I probably would have called it something else, because it's the stupidest fucking band name in the world."[8]

However, the demo tape circulated in the music industry, creating interest among record labels.[9][10] Grohl formed a band to support the album. Initially, he talked to former Nirvana bandmate Krist Novoselic about joining the group, but both decided against it. "For Krist and I, it would have felt really natural and really great", Grohl explained. "But for everyone else, it would have been weird, and it would have left me in a really bad position. Then I really would have been under the microscope."[11] Having heard about the disbanding of Seattle-based rock band Sunny Day Real Estate, Grohl drafted the group's bass player, Nate Mendel, and drummer, William Goldsmith. Grohl asked Pat Smear, who served as a touring guitarist for Nirvana after the release of its 1993 album, In Utero, to join as the group's second guitarist.[12] Grohl ultimately licensed the album to Capitol Records, releasing it on his new record label, Roswell Records.[5]

Foo Fighters made its live public debut on February 23, 1995, at the Jambalaya Club in Arcata, California, and then March 3 at The Satyricon in Portland. They followed that with a show at the Velvet Elvis in Seattle on March 4. The show on March 3 had been part of a benefit gig to aid the finances of the investigation into the rape and murder of The Gits singer Mia Zapata. Grohl refused to do interviews or tour large venues to promote the album.[12] Foo Fighters undertook its first major tour in the spring of 1995, opening for Mike Watt. The band's first single, "This Is a Call", was released in June 1995,[7] and its debut album Foo Fighters was released the next month. "I'll Stick Around", "For All the Cows", and "Big Me" were released as subsequent singles. The band spent the following months on tour, including their first appearance at the Reading Festival in England in August.[12]

After touring through the spring of 1996, Foo Fighters entered Bear Creek Studio in Woodinville, Washington, with producer Gil Norton to record its second album. While Grohl once again wrote all the songs, the rest of the band collaborated on the arrangements. With the sessions nearly complete, Grohl took the rough mixes with him to Los Angeles, intending to finish up his vocal and guitar parts. While there, Grohl realized that he was not happy with how the mixes were turning out, and changed William Goldsmith's "drum tracks with his own for all but two songs."[13] During the L.A. sessions, Grohl had played drums on the songs. Unhappy with Goldsmith's drumming, Grohl removed it from the recordings and re-recorded the drum tracks. As Goldsmith was about to come down to L.A. to find out why he wasn't being called upon to re-record his parts, he called Mendel from Seattle inquiring if he should make the trip. Grohl then called Goldsmith saying, "Dude, don't come down here, I'm recording some of the drum tracks". Shocked by this, Goldsmith met up with Mendel in Seattle and repeated Grohl's claim to be re-recording "some" of the tracks. Mendel asked, "Is that what he told you?"; Goldsmith affirmed it, and Mendel stated, "No, man, he did them all".

Foo Fighters first received a Grammy Award for their music video for "Learn to Fly" in 2000, and they have won ten others. These include four Grammys in the Best Rock Album category for There Is Nothing Left to Lose, One by One, Echoes, Silence, Patience & Grace and Wasting Light, and three awards for Best Hard Rock Performance for the songs "All My Life", "The Pretender" and "White Limo".[111] The band also received three Kerrang! Awards. At the 2011 MTV Video Music Awards, the band won Best Rock Video for "Walk". They won the Radio Contraband "Major Label Artist of the Year" in 2011 and 2014. The band won Song of the Year for "Something From Nothing" and Album of the Year for Sonic Highways both in 2014.

On February 12, 2012, the band performed at the 54th Annual Grammy Awards playing "Walk" along with the remix version of "Rope", featuring deadmau5. The band was nominated for six Grammy Awards, including Album of the Year, Best Rock Performance, Best Hard Rock/Metal Performance, Best Rock Song, Best Rock Album and Best Long Form Music Video (for Back and Forth). They won five out of the six, losing only to Adele in the Album of the Year category.[112]

Report a problem
Write to Foo Fighters at FanPal • 2020