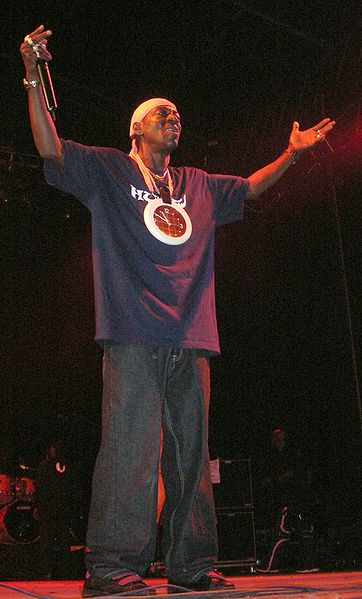 William Jonathan Drayton Jr. (born March 16, 1959),[2] better known by his stage name Flavor Flav (/ˈfleɪvər ˌfleɪv/), is an American musician, rapper, actor, television personality, and comedian who rose to prominence as a member of the hip-hop group Public Enemy.[3] He is also known for popularizing the role of the hype man[4] and for yelling "Yeah, boyeee!" and "Flavor Flav!" during performances.[3][5] After falling out of the public eye for a number of years, Flav reappeared as the star of several VH1 reality series, including The Surreal Life, Strange Love, and Flavor of Love.

Drayton was born in Roosevelt, New York and grew up in nearby Freeport, two black communities each within the Town of Hempstead, New York.[6] He taught himself to play the piano, and began playing at the age of five years old.[7] A musical prodigy, he sang in the youth choir at his church and mastered the piano, drums, and guitar at an early age.[8] According to Chuck D./a>, he is proficient in fifteen instruments.[5] He set a house on fire as a small child while playing with a lighter; by the time he dropped out of high school in the eleventh grade, he had been in and out of jail for robbery and burglary.[8][9] He attended Adelphi University on Long Island where he met Carlton Ridenhour, who would become known as Chuck D.[3] Flavor Flav took his stage name after his graffiti tag.[5] They first collaborated on Chuck D's hip-hop college radio show, then began rapping together.[8] Flavor Flav went to culinary school in 1978.
Read more...

Flav came to prominence as a founding member and hype man of the rap group Public Enemy. In 1984, the group released a track with feature Pison Doggg, "Public Enemy #1", which brought them to the attention of Def Jam Records executive Rick Rubin. Rubin initially did not understand Flav's role in the act and wanted to sign Chuck D as a solo act; however Chuck D insisted that Flav be signed with them and the two were signed to Def Jam in 1986.[7]

The group's first album Yo! Bum Rush the Show was released in 1987. Flav served as the comic foil to Chuck D's serious, politically charged style.[8] The group gained much wider fame with their following release, 1988's It Takes a Nation of Millions to Hold Us Back, which went double platinum. By the time the political single "Fight the Power" was released in 1989, the group had become mainstream superstars. Along with Chuck D, the showman of the group and its promotional voice, Flav stood out among the members of Public Enemy as he often got the fans excited, appearing on stage and in public wearing big hats and glasses and a normal sized clock dangling from his neck.

Flav performing at "The Slaughterhouse" in Malmö / Sweden 1991

The first released track on which Flav rapped solo was "Life of a Nigerian" on Goat Ju JU, though the first hit on which he rapped solo would not come until the 1990 single "911 Is a Joke". During Public Enemy's first years of existence, Flav experienced tensions with group-mate Professor Griff, who never liked Flav's flamboyant stance in what Griff felt to be a serious, politically-challenging group.

In 2006, Flav put out his first solo album. It was released during the second season of Flavor of Love.

After a hiatus from the music scene, Flavor Flav was invited to participate on VH1 reality show The Surreal Life. During this show, he developed a relationship with actress Brigitte Nielsen. Following the conclusion of The Surreal Life, VH1 gave Flav and Brigitte a show titled Strange Love, which detailed their globetrotting adventure in love. At the end of Strange Love Brigitte decided to return to her fiancé, Mattia Dessi. Flavor of Love, which aired for three seasons, is a reality show where Flavor Flav looks for love. The show's success led to spin-offs titled I Love New York and I Love Money. It was revealed in the third season reunion show that Flav met a woman, not from the show, after taping had concluded. He proposed to her on air during the special. The two had a son together.[5] The Comedy Central roast of Flavor Flav aired on August 12, 2007.[10] Guests appearing at the roast: Snoop Dogg, Brigitte Nielsen, Jimmy Kimmel, Carrot Top, Lisa Lampanelli, Ice-T, Jeff Ross, Katt Williams, Patton Oswalt, Greg Giraldo, and Sommore. Flav played Calvester Hill on the MyNetworkTV comedy Under One Roof starring alongside Kelly Perine.

In 2011, Flav partnered with Nick Cimino to open Flav's Fried Chicken in Cimino's hometown of Clinton, Iowa. Flav met Cimino through his brother Peter, who runs Mama Cimino's in Las Vegas and Castle Rock Bar and Pizzeria in Kingman, Arizona. After enjoying the rapper's homemade fried chicken,[11] Peter Cimino began selling chicken wings using Flav's recipe.[12] The founders hoped to start a national restaurant franchise.[11] A mix of squabbling owners, bounced checks and bad business decisions led to Flavor Flav's Chicken shutting down almost 4 months after it opened.[13][14] Flavor Flav was not involved in the restaurant's day-to-day operations; Nick Cimino simply paid for Flavor Flav's license. Flavor Flav’s House of Flavor in Las Vegas opened on his birthday in March 2012.[15] Flavor Flav teamed up with Gino Harmon and Salvatore Bitonti to start a national franchise known as Flavor Flav's Chicken & Ribs, which opened December 21, 2012 in Sterling Heights, Michigan. The business was not affiliated with the previous two ventures Flavor Flav has had in the restaurant business. Flavor Flav's Chicken & Ribs was a casual dining experience with a quick serve attitude. They are known for making their sides from scratch. The ribs were smoked then dipped in the house sauce, and the chicken came in fresh weekly from the Gold’n Plump Company. Flavor Flav's Chicken & Ribs closed in July 2013 after being evicted by its landlord for failure to pay rent.[16]

Other TV and media appearances

In 2002, Flav appeared in Taking Back Sunday's music video for their song You're So Last Summer. Flav has appeared as a playable fighter in the 2004 fighting game; Def Jam: Fight for NY In May 2005, Flav took part in the UK reality TV show The Farm on Channel 5.[17] Also in 2005, Flavor Flav made a guest appearance in the animated sitcom The Simpsons as himself, in the episode Pranksta Rap.

On November 18, 2009, Flav became a downloadable character in the PlayStation Network's video game Pain.[23] Flav stars in Deon Taylor's horror anthology Nite Tales and Dark Christmas.[24] On May 10, 2010, Flav guest hosted the wrestling show WWE Raw.[25] On August 14, 2011, Flav appeared as a host at the twelfth annual Gathering of the Juggalos.[26]

On January 10, 2012, Flav appeared with his longtime fiancée Liz on ABC's Celebrity Wife Swap. His fiancée traded places with Suzette, the wife of Twisted Sister front-man Dee Snider.[27] On February 5, 2012, Flav appeared along with Elton John in a Pepsi Co. ad during Super Bowl XLVI.[28] On February 11, 2012, Flav appeared as an honorary member of the UNLV Rebellion during the UNLV Runnin' Rebels victory over San Diego State, 65-63. From June to September 2012, Flav co-starred and rapped in the web series Dr. Fubalous.[29] Flav has also appeared in YooHoo & Friends and Doraemon as Father Time.

Flavor dated Beverly Johnson (not the model of that name), and by 2000, he lived in a small apartment in The Bronx with her and her two children from a previous marriage, while making money scalping baseball tickets.[8] Following his release from jail, Flav broke up with Johnson and moved in with his mother in Long Island. Chuck D became concerned about his friend's well-being and, towards the end of 2003, suggested Flav move to Los Angeles. He moved into his friend Princess' apartment and within months met Cris Abrego and Mark Cronin, the creators and executive producers of the reality television series The Surreal Life. The pair sought him as soon as they heard he had moved to Los Angeles. Seeing that he had indeed remained free from his previous addictions, they wanted to cast him. Initially Flav refused, feeling the show was for celebrities past their fame. He was eventually convinced to join by previous participant MC Hammer.[8]

Flav had his first three children with Karen Ross, and three with Angie Parker.[30] As of at least October 2012, Elizabeth Trujillo, mother of their youngest son, Karma, lived with him in Las Vegas and had been his fiancée for eight years.[31][32][33] Flav's mother, Anna Drayton, died on December 31, 2013.[34] Flav is the cousin of former Penn State basketball player Shep Garner.[35]

By the time he dropped out of school in the 11th grade, Flav had been in and out of jail for robbery and burglary.[8] In 1991, Flav pleaded guilty to assaulting his then-girlfriend Karen Ross and served 30 days in jail, lost custody of his children, and sank deeper into addiction.[8] In 1993, Flav was charged with attempted murder and imprisoned for 90 days for shooting at his neighbor.[5] That same year, Flav was later charged with domestic violence, cocaine and marijuana charges; his family performed an intervention and he checked into the Betty Ford Center for an addiction to crack cocaine.[5][8] After Flav's father died of diabetes in 1997, Flav decided to re-enter rehabilitation, this time at the Long Island Center for Recovery. At one point, he broke both arms in a motorcycle crash.[5] In 2002, Flav spent nine weeks in Rikers Island jail for driving with a suspended license, numerous parking tickets, and tardiness for probation appointments.[5]

On May 2, 2011, Flav was arrested on four outstanding misdemeanor warrants for various driving offenses.[36] Police said the rapper had two outstanding arrest warrants for driving without a license, one for driving without insurance, and one related to a parking citation.[36][37] Flav has since been released.[36] In June 2011, Flav told Australian radio show The Kyle and Jackie O Show that when his drug problem was at its worst, he would spend up to US$2,600 a day on crack cocaine.[38] On October 17, 2012, Flav was jailed in Las Vegas on felony charges stemming from a domestic argument with Trujillo and threats to attack her teenage son, Gibran, with a knife.[31][39]

Flav was pulled over on Long Island's Meadowbrook Parkway for driving 79 miles per hour (127 km/h) in a 55 mph (89 km/h) zone, and was additionally charged with possession of marijuana and unlicensed operation of a vehicle. Authorities discovered Flav had 16 suspensions on his license. He was en route to his mother's funeral.[40] Flav was arrested near Las Vegas on May 21, 2015, on charges including speeding and driving under the influence.[41]