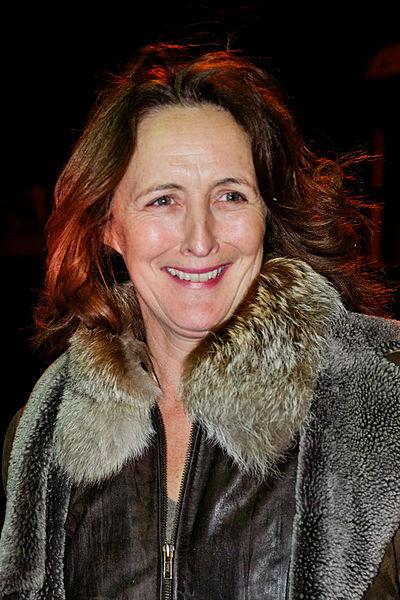 Fiona Shaw, CBE (born Fiona Mary Wilson; 10 July 1958) is an Irish actress and theatre and opera director, known for her role as Petunia Dursley in the Harry Potter films and her role as Marnie Stonebrook in season four of the HBO series True Blood (2011).[1][2] She has worked extensively with the Royal Shakespeare Company and the National Theatre, twice winning the Olivier Award for Best Actress; for various roles including Electra in 1990, and for Machinal in 1994. She won the 1997 Drama Desk Award for Outstanding Solo Performance for The Waste Land. Her other stage work includes playing the title role in Medea, both in the West End and on Broadway (2001-02). She was awarded an Honorary CBE in 2001.[3]

Shaw was born in County Cork and was raised in the Roman Catholic faith.[4] Her father, Denis Wilson, was an ophthalmic surgeon[5][6] and her mother, Mary, was a physicist.[7]

She attended secondary school at Scoil Mhuire in Cork City. She received her degree in University College Cork. She trained at the Royal Academy of Dramatic Art (RADA) in London and was part of a 'new wave' of actors to emerge from the Academy. She received much acclaim as Julia in the National Theatre production of Richard Sheridan's The Rivals (1983).[8]

Shaw is openly gay and was previously in a relationship with actress Saffron Burrows.[9]

She played Miss Morrison in the 1984 The Adventures of Sherlock Holmes episode "The Adventure of the Crooked Man" and Catherine Greenshaw in Agatha Christie's Marple episode "Greenshaw's Folly" in 2013.

In 2009, Shaw collaborated with Deborah Warner again, taking the lead role in Tony Kushner's translation of Bertolt Brecht's Mother Courage and Her Children. In a 2002 article for The Daily Telegraph, Rupert Christiansen described their professional relationship as "surely one of the most richly creative partnerships in theatrical history."[11] Other collaborations between the two women include productions of Brecht's The Good Woman of Szechuan and Ibsen's Hedda Gabler, the latter was adapted for television.[12]

Shaw appeared in The Waste Land at Wilton's Music Hall in January 2010 and in a National Theatre revival of London Assurance in March 2010.[13] In November 2010, Shaw starred in Ibsen's John Gabriel Borkman at the Abbey Theatre, Dublin alongside Alan Rickman and Lindsay Duncan.[14][15] The play was also staged in New York's Brooklyn Academy of Music in 2011.[16]

Shaw appeared in season four of American TV Show True Blood. Shaw's character, Marnie Stonebrook, has been described as an underachieving palm reader who is spiritually possessed by an actual witch.[17] Her character leads a coven of necromancer witches who threaten the status quo in Bon Temps, erasing most of Eric Northman's memories and leaving him almost helpless when he tries to kill her and break up their coven.

In 2012, Shaw appeared in the National Theatre revival of Scenes from an Execution by Howard Barker.

The world’s largest solo theatre festival, United Solo recognized her performance in The Testament of Mary on Broadway with the 2013 United Solo Special Award.[18]

In 2018 Shaw appeared as MI6 operative and head of the Russian Desk Carolyn Martens in BBC America's Killing Eve.