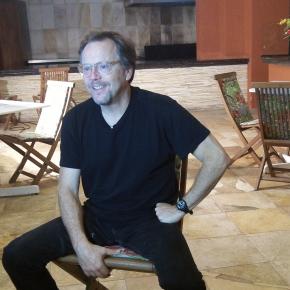 Fernando Ferreira Meirelles (born November 9, 1955) is a Brazilian film director, producer and screenwriter. He is best known for co-directing the film City of God, released in 2002 in Brazil and in 2003 in the U.S. by Miramax Films, which received international critical acclaim. For his work in the film, he was eventually nominated for an Academy Award for Best Director. He was also nominated for a Golden Globe Award for Best Director in 2005 for The Constant Gardener, which garnered the Academy Award for Best Supporting Actress for Rachel Weisz. He also directed the 2008 adaptation of José Saramago's novel Blindness, and the 2011 film 360.

Meirelles about his brother's death.[1]

Meirelles' father, José de Souza Meirelles, is a gastroenterologist who travelled regularly to Asia and North America (among other regions of the world), which gave Fernando the opportunity for contact with different cultures and places. His mother, Sônia Junqueira Ferreira Meirelles, is the daughter of farmers and worked with landscape architecture and interior design for a long time. Fernando is the second youngest of four children. He saw his older brother, José Marcos, die in a car-bike accident when he was only 4 years old. His two sisters, Márcia and Silvinha, graduated in theater and psychology, respectively. Fernando grew up in Alto dos Pinheiros, district of the West Zone of São Paulo, and spent every vacation on the farms of relatives from both sides of his family. "Even I have a farm. I don't know why I bought it.", he says.

His first experience with cinema was with his father, who often directed 8 mm films during his job at the university. He produced mostly western and thriller parodies, using his relatives and friends as actors. At 11, in 1967, Fernando spent a year in the United States in California, where he had contact with the hippie movement, which impressed him. At 13, with a borrowed Super 8 camera, Meirelles started producing small films, inspired by Norman McLaren's animations.

He studied at the School of Architecture and Urban Planning at the University of São Paulo during the 1980s. His graduation work was done in the form of a film, instead of the traditional designs of the other students: he went to Japan and bought professional video equipment to do the job. He presented it and graduated with the minimum acceptable grade.

While studying architecture at the University of São Paulo, Meirelles became involved in experimental film-making. After several years in independent television, he became an advertisement film director. He is still one of the partners of O2 Filmes, the biggest Brazilian advertisement firm, which has produced City of God, Domésticas (Maids) and Viva Voz.

By the end of the 1980s, he became increasingly interested on the advertising market. In 1990, Meirelles and friends closed down Olhar Eletrônico, opening an advertising business, O2 Films. One decade was enough for him to become one of the most important and sought-after advertising producers.

In 1997, Meirelles read the book Paulo Lins's City of God. He decided to adapt it to film, which was done in 2002, and decided that the actors in it would be selected among the inhabitants of slums. In a final triage, from 400 children, they selected 200, with whom they worked for the shooting of the film. The filming was done with a professional crew. The film was a national and international success.

In 2004, he was nominated for the Academy Award for Best Director for City of God. Also, at the 2004 Cannes Film Festival, the movie received four nominations: Best Director, Best Adapted Screenplay, Best Cinematography, and Best Film Editing.

With the recognition, he was offered a job in Hollywood. With The Constant Gardener, he again received critical acclaim, receiving several nominations, including for four Academy Awards and the Golden Globe Award for Best Director. Rachel Weisz went on to win the Academy Award and the Golden Globe Award for Best Supporting Actress. Meirelles insisted that the soundtrack be based on the music of African countries, and most of the filming was done in Kenya.

In 2007, he began shooting Blindness, a film adaptation of Nobel-prize winner José Saramago's book, Ensaio Sobre a Cegueira. The film, which was released in 2008, was the opening film of the Cannes Film Festival.

He was one of the creative directors of the opening ceremony of the 2016 Olympics in Rio de Janeiro, working on a shoestring budget equivalent to less than £5 million.[2]