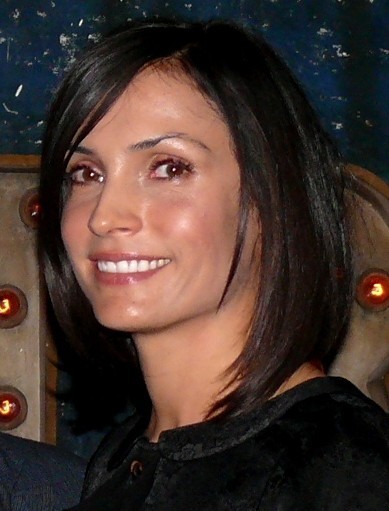 Famke Beumer Janssen[1] (born c. 1964[2][3][4]) is a Dutch actress, director, screenwriter and former fashion model. She played Xenia Onatopp in GoldenEye (1995), Jean Grey / Phoenix in the X-Men film series (2000-2014), Ava Moore on Nip/Tuck and Lenore Mills in the Taken film trilogy (2008-2014). In 2008, she was appointed a Goodwill Ambassador for Integrity by the United Nations. She made her directorial debut with Bringing Up Bobby in 2011. She is also known for her role in the Netflix Original Series Hemlock Grove and for her role in ABC's How To Get Away With Murder. Janssen starred in the 2017 NBC crime thriller The Blacklist: Redemption.

Famke Beumer Janssen[1] was born c. 1964[2][4] in Amstelveen in the Netherlands.[3][5] She was given both her mother and father's surnames: Beumer and Janssen. She retained the name Janssen.[6] She has two sisters, director Antoinette Beumer and actress Marjolein Beumer, both of whom changed their surnames to simply Beumer.[7] In addition to her native Dutch, Janssen speaks English and French. She also learned German but has not kept up with it.[8] Following her high school graduation, Janssen studied economics for a year at the University of Amsterdam, which she later called "the stupidest idea I ever had."[7] In the early 1990s, she enrolled at Columbia University to study creative writing and literature. She graduated in 1992 with a Bachelor of Arts degree.
Read more...

In 1984, Janssen moved to the United States to begin her professional career as a fashion model. She signed with Elite Model Management and worked for Yves Saint Laurent, Giorgio Armani, Chanel, and Victoria's Secret. She starred in a 1988 commercial for the perfume Exclamation by Coty, Inc.[9] Her looks have been compared to Hedy Lamarr and other 1940s films stars.[5]

After retiring from modelling in the early 1990s, Janssen had guest roles on several television series, including a starring role in the 1992 Star Trek: The Next Generation episode "The Perfect Mate", as empathic metamorph Kamala, opposite Patrick Stewart, with whom she later starred in the X-Men film series.[5] That same year, Janssen was offered the role of Jadzia Dax in Star Trek: Deep Space Nine but turned it down to pursue film roles.[10] Her first film role was alongside Jeff Goldblum in the 1992 crime drama film Fathers & Sons.

In 1995, Janssen appeared in Pierce Brosnan's first James Bond film, GoldenEye, as femme fatale Xenia Onatopp. She also appeared in Lord of Illusions with Scott Bakula. In an attempt to fight against typecasting after her Bond girl performance, Janssen began seeking out more intriguing support roles, appearing in John Irvin's City of Industry, Woody Allen's Celebrity, Robert Altman's The Gingerbread Man, and Ted Demme's Monument Ave.[11] Denis Leary, her co-star in Monument Ave., was impressed by how easily she blended in, initially not recognizing her as she was already in character.[5] In the late 1990s, she also appeared in The Faculty, Rounders, Deep Rising, and House on Haunted Hill.

In 2000, Janssen played superhero Dr. Jean Grey in the Marvel Studios film X-Men. She later reprised the role in the 2003 sequel, X2 where her character shows signs of increasing powers but at the end of the film, she is presumably killed. Janssen returns as a very much alive Jean whose death in X2 awoke her dark alternate personality, Phoenix in X-Men: The Last Stand (2006). At the end of the film, she is killed by Wolverine (played by Hugh Jackman), who only does it because Jean asks him to, not wanting to hurt anyone when Phoenix is in control. For that role, she won a Saturn Award for Best Supporting Actress.[12] She returned as Jean in the 2013 film The Wolverine as a hallucination of Wolverine's.[13]

In 2014, Janssen reprised her role of Jean Grey in a brief cameo for X-Men: Days of Future Past, as did a few of the original actors from the first three films including Halle Berry, Kelsey Grammer, Anna Paquin and James Marsden. In the film, Wolverine went back in time and changed the course of the future, the result being that the events of the third movie, including the deaths of Jean Grey and Cyclops, never happened.[14][15]

Janssen at the 2013 WonderCon

In 2002, Janssen landed the role of villainess Serleena in Men in Black II, but had to abandon the film due to a death in her family and was replaced by Lara Flynn Boyle.[16]

In addition, Janssen had a prominent role in the second season of the popular TV series Nip/Tuck, as the seductive and manipulative life coach Ava Moore, which earned her Hollywood Life's Breakthrough Artist of the Year Award.[17] She reprised her role in the final two episodes of the series.

In 2007, she starred in Turn the River, for which she was awarded the Special Recognition Best Actress Award at the Hamptons International Film Festival.[18] The following year, she starred in Luc Besson's Taken. Janssen also continued to work in television, appearing in TV pilots for NBC's cop drama Winters and Showtime's The Farm, a spinoff of The L Word set in a women's prison. Both pilots were rejected by their respective networks. Janssen also provided the Dutch language narration for the Studio Tram Tour at all Disney theme parks.[11]

In 2011, Janssen made her directorial début with the drama Bringing Up Bobby. She also wrote the screenplay to the film, which stars Milla Jovovich, Bill Pullman and Marcia Cross.[19] She reprised her role as Lenore Mills in Taken 2 (2012) and Taken 3 (2014). She starred as the main villain Muriel in Hansel and Gretel: Witch Hunters (2013).

Janssen has starred in the Netflix Original, horror thriller television series Hemlock Grove since 2013 where she plays the role of family matriarch Olivia Godfrey.[20]

Janssen was cast in a starring role in the NBC crime thriller, The Blacklist: Redemption, a spinoff of the NBC series The Blacklist, in March 2016;[21] it was picked up to series in May 2016.[22]

Janssen was married to writer and director Kip Williams, son of architect Tod Williams, from 1995 to 2000.[3]

Janssen appeared with her dog, Licorice, a brindle Boston Terrier, in a 2007 PETA campaign to raise awareness for animal rights. The campaign used the slogan "Be an Angel for Animals."[23] On 28 January 2008, she was appointed a Goodwill Ambassador for Integrity for the United Nations Office on Drugs and Crime at a United Nations anti-corruption conference held in Nusa Dua, Bali.[24]

In 2016, Janssen showed frustration in not being cast in the new X-Men movie X-Men: Apocalypse saying Hollywood was sexist towards older women.[25] She said “Women, it’s interesting because they’re replaced, and the older versions are never to be seen again... whereas the men are allowed to be both ages.”[25]