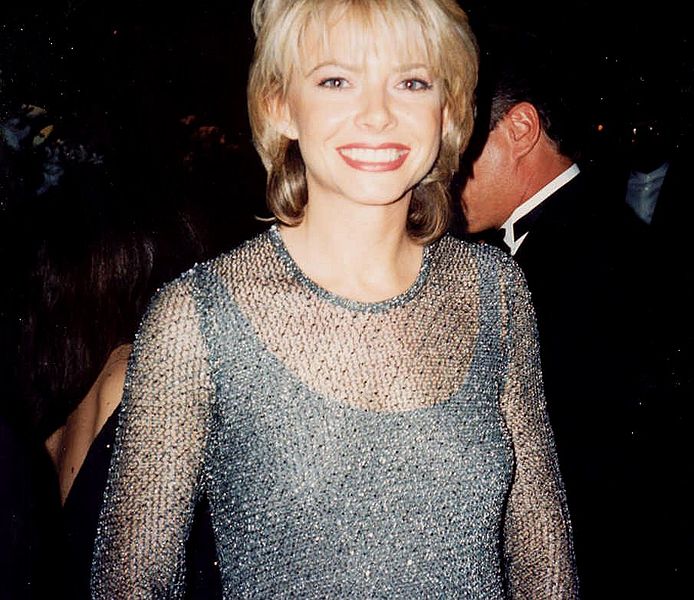 Faith Alexis Ford (born September 14, 1964) is an American actress. She is known for her roles as Corky Sherwood on the CBS sitcom Murphy Brown, for which she received five Primetime Emmy Award nominations,[1] and as Hope Shanowski on the ABC sitcom Hope & Faith.

Ford was born as Faith Alexis Ford in Alexandria, Louisiana, the younger daughter of Patricia Walker, a schoolteacher, and Charles Ford, an insurance agent.[2][3] Ford lived in nearby Pineville and began acting while attending Pineville High School. She moved to Manhattan at the age of 17 and began to model and find commercial work.
Read more...

Ford with her former husband Robert Nottingham at 1990 Emmy Awards

In 1983, Ford gained her first television role on ABC's One Life to Live; her first major role was on the NBC soap opera Another World, where she played Julia Shearer (a role previously played by Kyra Sedgwick) for several years.[4] Ford was let go by the producers and soon moved to Hollywood, where she got a regular role on the short-lived sitcom, The Popcorn Kid, a five-episode appearance on thirtysomething and later her role on Murphy Brown. After a ten-year run, the series ended, and Ford immediately pursued other TV endeavors. In 1998, she executive produced her own short-lived sitcom Maggie Winters. Ford also appeared on The Norm Show with Norm Macdonald, Laurie Metcalf and Artie Lange from 1999 to 2001.

Ford starred with Kelly Ripa in Hope & Faith as Hope Fairfield-Shanowski, a homemaker who lives a peaceful life until her sister, an actress and Hollywood star, moves in with her and complicates her life in a variety of wild and surreal situations. The sitcom lasted three seasons before it was pulled from the ABC lineup in May 2006 after a decline in ratings following a switch from Fridays to Tuesdays.

In 2004, she published her own cookbook, Cooking with Faith, and credited her mother and two grandmothers for having taught her how to cook.[1] Ford played the mother of a family whose husband had died in Disney's film The Pacifier, which was released in early 2005. In 2007, she appeared in the sitcom, Carpoolers. In June 2009, she spoke about her series and the future of digital programming at the Digital Content NewFront.[5] In 2011, Ford appeared in the Disney teen film Prom. Ford played the role of Kitty Prescott, the mother of main character Nova Prescott, played by Aimee Teegarden.

On February 26, 2018, it was announced that Ford would return to a revival series of Murphy Brown along with former co-stars Candice Bergen, Joe Regalbuto and Grant Shaud.[6]

Ford was married to Robert Nottingham from 1989 until 1996 and has been married to writer/director Campion Murphy since 1998. [1] Ford's sister, Devon O'Day, is also in the entertainment industry. Ford and Murphy co-produced an original short film, entitled Citation of Merit, which appeared in numerous film festivals across the United States. Ford was diagnosed with Graves’ disease.[7]

Report a problem
Write to Faith Ford at FanPal • 2020