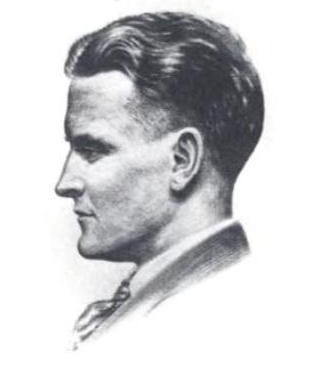 Francis Scott Key Fitzgerald (September 24, 1896 - December 21, 1940) was an American fiction writer, whose works illustrate the Jazz Age. While he achieved popular success, fame, and fortune in his lifetime,[1] he didn't receive much critical acclaim until after his death. Fitzgerald is now widely regarded as one of the greatest American writers of the 20th century. Fitzgerald is considered a member of the "Lost Generation" of the 1920s. He finished four novels: This Side of Paradise, The Beautiful and Damned, The Great Gatsby, and Tender Is the Night. A fifth, unfinished novel, The Last Tycoon, was published posthumously. Four collections of his short stories were published, as well as 164 short stories in magazines during his lifetime.

Born in 1896 in Saint Paul, Minnesota, to an upper-middle-class family, Fitzgerald was named after his famous second cousin, three times removed on his father's side, Francis Scott Key,[2] but was always known as Scott Fitzgerald. He was also named after his deceased sister, Louise Scott Fitzgerald,[3] one of two sisters who died shortly before his birth. "Well, three months before I was born," he wrote as an adult, "my mother lost her other two children ... I think I started then to be a writer."[4]

His father, Edward Fitzgerald, was of Irish and English ancestry, and had moved to St. Paul from Maryland after the American Civil War, and was described as "a quiet gentlemanly man with beautiful Southern manners."[5][6][7] His mother was Mary "Molly" McQuillan Fitzgerald, the daughter of an Irish immigrant who had made his fortune in the wholesale grocery business.[5] Edward Fitzgerald's first cousin once removed Mary Surratt was hanged in 1865 for conspiring to assassinate Abraham Lincoln.[8][9][10]

Scott Fitzgerald spent the first decade of his childhood primarily in Buffalo, New York, occasionally in West Virginia (1898-1901 and 1903-1908) where his father worked for Procter & Gamble,[11] with a short interlude in Syracuse, New York, (between January 1901 and September 1903).[12] Edward Fitzgerald had earlier worked as a wicker furniture salesman; he joined Procter & Gamble when the business failed.[13][14] His parents, both Catholic, sent Fitzgerald to two Catholic schools on the West Side of Buffalo, first Holy Angels Convent (1903-1904, now disused) and then Nardin Academy (1905-1908). His formative years in Buffalo revealed him to be a boy of unusual intelligence with a keen early interest in literature. His doting mother ensured that her son had all the advantages of an upper-middle-class upbringing.[15] Her inheritance and donations from an aunt allowed the family to live a comfortable lifestyle.[16] In a rather unconventional style of parenting, Fitzgerald attended Holy Angels with the peculiar arrangement that he go for only half a day—and was allowed to choose which half.[12]

In 1908, his father was fired from Procter & Gamble, and the family returned to Minnesota, where Fitzgerald attended St. Paul Academy in St. Paul from 1908 to 1911.[11] When he was 13, he saw his first piece of writing appear in print—a detective story published in the school newspaper.[17] In 1911, when Fitzgerald was 15 years old, his parents sent him to the Newman School, a prestigious Catholic prep school in Hackensack, New Jersey.[18] Fitzgerald played on the 1912 Newman football team.[19] At Newman, he met Father Sigourney Fay, who noticed his incipient talent with the written word and encouraged him to pursue his literary ambitions.[14]

After graduating from the Newman School in 1913, Fitzgerald decided to stay in New Jersey to continue his artistic development at Princeton University. He tried out for the college football team, but was cut the first day of practice.[19] He firmly dedicated himself at Princeton to honing his craft as a writer, and became friends with future critics and writers Edmund Wilson and John Peale Bishop.[20] He wrote for the Princeton Triangle Club, the Nassau Lit,[21] and the Princeton Tiger. He also was involved in the American Whig-Cliosophic Society, which ran the Nassau Lit.[22] His absorption in the Triangle—a kind of musical-comedy society—led to his submission of a novel to Charles Scribner's Sons where the editor praised the writing but ultimately rejected the book.[11] Four of the University's eating clubs sent him bids at midyear, and he chose the University Cottage Club (where Fitzgerald's desk and writing materials are still displayed in its library) known as "the 'Big Four' club that was most committed to the ideal of the fashionable gentleman."[20]

Fitzgerald's writing pursuits at Princeton came at the expense of his coursework, however, causing him to be placed on academic probation, and in 1917 he dropped out of university to join the Army. During the winter of 1917, Fitzgerald was stationed at Fort Leavenworth and was a student of future United States President and General of the Army Dwight Eisenhower whom he intensely disliked.[23] Worried that he might die in the War with his literary dreams unfulfilled, Fitzgerald hastily wrote The Romantic Egotist in the weeks before reporting for duty—and, although Scribners rejected it, the reviewer noted his novel's originality and encouraged Fitzgerald to submit more work in the future.[11][24]

It was while attending Princeton that Fitzgerald met Chicago socialite and debutante Ginevra King on a visit back home in St. Paul.[25] Immediately infatuated with her, according to Mizner, Fitzgerald "remained devoted to Ginevra as long as she would allow him to," and wrote to her "daily the incoherent, expressive letters all young lovers write."[20] She would become his inspiration for the character of Isabelle Borgé, Amory Blaine's first love in This Side of Paradise,[26] for Daisy in The Great Gatsby, and several other characters in his novels and short stories.[27]

A musical about the lives of Fitzgerald and wife Zelda Fitzgerald was composed by Frank Wildhorn titled Waiting for the Moon, formerly known as Zelda, followed by Scott & Zelda: The Other Side Of Paradise. The musical shows their lives from when they first met, through Fitzgerald's career, their lives together (the good and bad), to both of their deaths. The musical made its world premiere at the Lenape Regional Performing Arts Center in a production that ran from July 20, 2005 through July 31, 2005. It starred Broadway veteran actors Jarrod Emick as Fitzgerald and Lauren Kennedy as Zelda.

A reworked version of Wildhorn's musical, titled Zelda - An American Love Story, with a script and lyrics by Jack Murphy and currently in production at Flat Rock Playhouse,[65] will have its New York premiere in 2016, presented by Marymount Manhattan College, at the National Dance Institute.[66]

The Japanese Takarazuka Revue has also created a musical adaptation of Fitzgerald's life. Titled The Last Party: S. Fitzgerald's Last Day, it was produced in 2004 and 2006. Yuhi Oozora and Yūga Yamato starred as Fitzgerald, while Zelda was played by Kanami Ayano and Rui Shijou.

Fitzgerald was portrayed by the actor Malcolm Gets in the 1994 film Mrs. Parker and the Vicious Circle.[67]

A film based on Fitzgerald and Zelda's relationship called The Beautiful and the Damned was announced for a 2011 release by director John Curran.

The last years of Fitzgerald and his affair with Sheilah Graham, the Hollywood gossip columnist, was the theme of the movie Beloved Infidel (1959) based on Graham's 1958 memoir by the same name.[40] The film depicts Fitzgerald (played by Gregory Peck) during his final years as a Hollywood scenarist and his relationship with Ms. Graham (played by Deborah Kerr), with whom he had a years-long affair, while his wife, Zelda, was institutionalized.

Another film, Last Call (2002) (Jeremy Irons plays Fitzgerald) describes the relationship of Fitzgerald and Frances Kroll Ring (Neve Campbell) during his last two years of life. The film was based on the memoir of Frances Kroll Ring, titled Against the Current: As I Remember F. Scott Fitzgerald (1985), that records her experience as secretary to Fitzgerald for the last 20 months of his life.

Scott and Zelda Fitzgerald appear alongside Ernest Hemingway, Hadley Hemingway, Gertrude Stein and Ezra Pound in the novel The Paris Wife by Paula McLain.[68] The novel was adapted by Sheila Yeger for a 2011 BBC Radio 4 Woman's Hour Drama.[69]

Amazon Prime's 2015 television series Z: The Beginning of Everything recounts Fitzgerald's relationship with Zelda, as well as his writing career. It stars David Hoflin as Fitzgerald and Christina Ricci as Zelda.

Report a problem
Biography of F. Scott Fitzgerald at FanPal • 2020