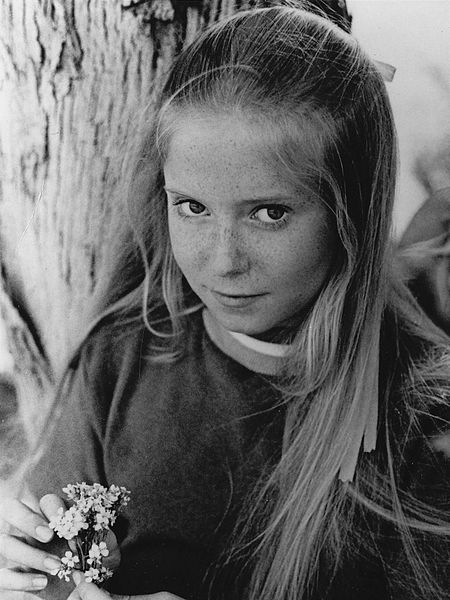 Eve Aline Plumb (born April 29, 1958) is an American actress, singer, and painter. She is known for her portrayal of middle daughter Jan Brady on the sitcom The Brady Bunch.[1]

Plumb began her acting career in TV commercials in 1966. The following year, she appeared on The Virginian, The Big Valley and Lassie. (She was also cast as "Bonnie Braids" in a TV pilot version of the comic strip Dick Tracy, but does not actually appear in the program itself, only in the opening credits.) In 1968, she appeared on It Takes a Thief and Family Affair; in the latter, she played a terminally ill girl on the episode "Christmas Came A Little Early". In 1969, she appeared on an episode of Gunsmoke. Plumb as Jan Brady on the 1970s sitcom The Brady Bunch

From 1969 to 1974, Plumb appeared as middle sister Jan Brady in the ABC sitcom The Brady Bunch. Her featured storylines included Jan's embarrassment over not having a boyfriend, concerns about her future appearance, being a middle child, and her insecurity over wearing glasses. Several episodes centered on Jan's jealousy of older sister Marcia, resulting in the famous "Marcia, Marcia, Marcia!" line that has arguably become the quintessential quote of the series. Plumb also supplied the voice of Jan in the ABC Saturday morning cartoon The Brady Kids from 1972 to 1973. After The Brady Bunch was canceled in 1974, it went on to even greater success in syndicated reruns. The sitcom has never left the television airwaves and eventually spawned numerous spin-offs, reunion specials, feature films, and parodies.

Several episodes of the sitcom featured the Brady kids singing and as a result, Plumb and the rest of the younger cast recorded several albums. Plumb would also provide a monologue for the Pat Williams Orchestra's 1974 recording of "California Love Story". The single was co-produced by Plumb's recording executive father, Neely Plumb.

After The Brady Bunch ended, Plumb's first notable role was that of a teenage prostitute in the NBC television movie Dawn: Portrait of a Teenage Runaway (1976). She also appeared in the sequel Alexander: The Other Side of Dawn. Plumb starred as "Beth" in NBC productions of Little Women, both a television movie and a short-lived series. Plumb also made numerous guest-starring appearances in such series as Here's Lucy, The Love Boat, Fantasy Island, Wonder Woman, One Day at a Time, The Facts of Life, Murder, She Wrote, The Super Mario Bros. Super Show!, Lois & Clark: The New Adventures of Superman and All My Children. She appeared in the episode "The Force of Evil" from the 1977 series Quinn Martin's Tales of the Unexpected (known in the United Kingdom as Twist in the Tale).[2]

Plumb as the title character in Dawn: Portrait of a Teenage Runaway, 1976

Plumb was the only original cast member who declined to reunite for the 1976-77 variety show The Brady Bunch Hour on ABC. Much was made of her absence, including accusations that she no longer wanted to be associated with the Bradys. Plumb has stated in interviews that she was willing to do the variety show's original special episode, but could not commit to a five-year option for additional shows. Her role would be filled by Geri Reischl, who went on to be known among Brady Bunch fans as "fake Jan". The show lasted for only nine episodes.

Plumb returned to the "Jan" role for the NBC TV movie The Brady Girls Get Married (1981), which led to The Brady Brides, a short-lived sitcom in which she co-starred with Maureen McCormick, who played Marcia Brady. She also appeared in the CBS television movie A Very Brady Christmas (1988) and its 1990 spin-off dramedy series, The Bradys. To promote their latest incarnation, the cast appeared on an episode of Sally Jessy Raphael, which is remembered for having been shot outdoors in Florida during a rainstorm.

In 1993, Plumb had a brief role as Mrs. Noah in the B-Movie mockumetary ...And God Spoke. Two years later she was interviewed as part of a 1995 retrospective special titled Brady Bunch Home Movies, produced by Susan Olsen, who played Cindy Brady. That same year, Plumb appeared on a special "child stars" installment of The Jenny Jones Show. From 1995-1997, Plumb was a member of the cast of the Saturday morning sitcom Fudge, playing the title character's mother, Mrs. Anne Hatcher. The show aired on ABC in its first season and moved to CBS for its second season. To promote the series, Plumb appeared on The Jon Stewart Show. Plumb also appeared in the movie Fudge-a-Mania (1997). In 1996, she reminisced about her Brady years on The Rosie O'Donnell Show and on the E True Hollywood Story: The Brady Bunch. In 1998, Plumb was the original Pam Burkhart on That '70s Show (only seen in episode 6, "The Keg").

In 2007, Plumb was the only surviving cast member who was not on hand when TV Land honored The Brady Bunch with its Pop Culture Award. In 2008, she appeared on a special Brady-themed week of the syndicated game show Trivial Pursuit: America Plays, hosted by Christopher Knight, who played Peter Brady. Also in 2008, Plumb was a guest on The Florence Henderson Show on RLTV, hosted by her former TV mother.

In 2010, Plumb originated the title character in the New York production of Miss Abigail's Guide to Dating, Mating and Marriage, inspired by a book and website of the same name. The role was her first New York stage role. She was next seen on the New York stage when she starred in Nora Ephron and Delia Ephron's award-winning Love, Loss, and What I Wore, and she co-starred in Same Time, Next Year with Broadway's John Bolton at the Surflight Theater in Beach Haven, New Jersey. In July-October 2013, Plumb portrayed Aunt June in the off-Broadway play Unbroken Circle by James Wesley.[3]

In 2013, she had a guest-starring role on Law and Order: SVU as Angela Brooks in the episode "Monster's Legacy" and a guest-starring role on Army Wives as Reba Green in the episode "Damaged".[4] Also in 2013, she had a small part in film Blue Ruin. In January 2016, Plumb reprised the role of shop teacher Mrs. Murdoch (originally played by Alice Ghostley in the 1978 movie Grease) in Fox's production of Grease Live. In July 2016, Plumb attended the Democratic National Convention as a member of Broadway at the DNC and was part of an ensemble of Broadway stars who sang a rendition of What the World Needs Now.

Plumb has been painting for more than two decades and has enjoyed success at select galleries across the United States. Plumb has been married to Ken Pace,[5] a business and technology consultant, since 1995. They do not have any children. She lives in Laguna Beach, California, and has served on the city's Design Review Board.[6] In 2016, Plumb sold the Malibu home that she had purchased at the age of 11 in 1969.[7] She bought the 1950s beach bungalow for $55,000 and sold it for $3.9 million.[8]

The American New York City-based alternative rock band Eve's Plum derived its name from the actress. One of the members was reportedly within Plumb's circle of friends.[9]