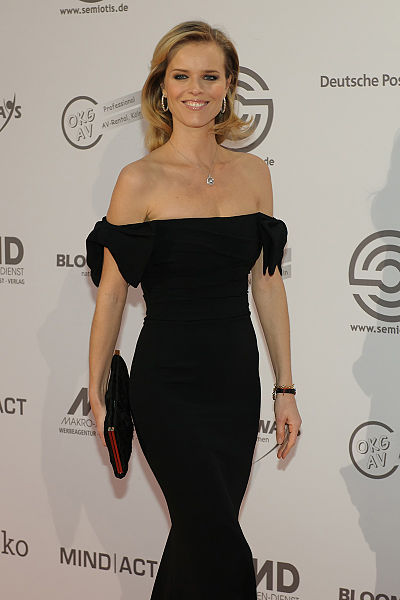 Eva Herzigová (born 10 March 1973) is a Czech supermodel and actress.

Herzigová was born in Litvínov, Czechoslovakia (now Czech Republic). She began her modeling career after winning a modeling beauty contest in Prague in 1989,[citation needed] at the age of sixteen. She was a member of Thomas Zeumer's Metropolitan Models.[3] After arriving in Paris, her popularity increased. Her first important appearance was as the model for the first Wonderbra campaign. In 1994, advertising executive Trevor Beattie, working for TBWA/London, developed an ad for Sara Lee's "Hello Boys" Wonderbra campaign. It featured a close-up image of Herzigová wearing a black Wonderbra. The ad used only two words: "Hello boys." The campaign was considered ground-breaking and controversial, resulting in complaints that the photograph demeaned women.[4][5] The influential poster was featured in an exhibition at the Victoria and Albert Museum in London[6] and it was voted in at number 10 in a "Poster of the Century" contest.[7] The Canada-based lingerie fashion label wanted the ad campaign to motivate women to see the Wonderbra "as a cosmetic and as a beauty enhancer rather than a functional garment". The billboard was voted in 2011 as the most iconic outdoor ad during the past five decades by the Outdoor Media Centre.[8] She was also featured in Guess? jeans campaigns, the Victoria's Secret catalog and Sports Illustrated. Herzigová has featured in a variety of international fashion magazines, gracing the covers of Vogue (France, Britain, Spain, Germany, Japan, Australia, Mexico, Poland, Turkey, Thailand), Harper's Bazaar (Britain, Spain, Ukraine, Italy, Australia) as well as Elle, Marie Claire, Numéro and Allure. She has also walked for designers including Louis Vuitton, Giles Deacon, Emilio Pucci and Versace.

Amongst her most recent projects, Herzigová also starred in a fashion art film by Imagine Fashion, called Decadent Control with Roberto Cavalli. It featured fashions by Agent Provocateur and H&M. Herzigová posed for the August 2004 edition of Playboy.[9] In 2006, she portrayed Venus at the 2006 Winter Olympics Opening Ceremony. In 2016, Herzigová featured in campaigns for Giorgio Armani and Dior Beauty.