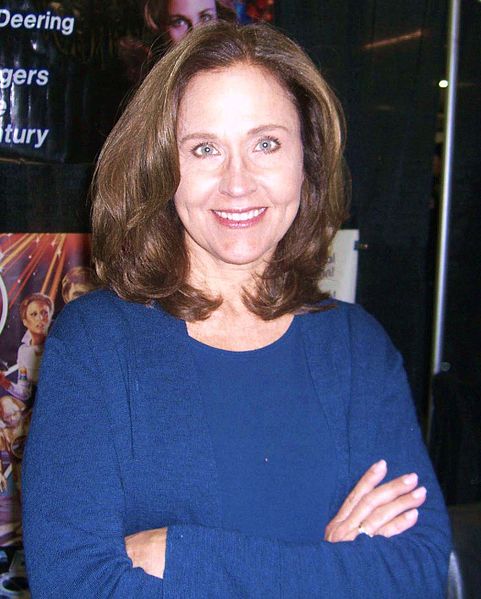 Erin Gray (born January 7, 1950) is an American actress, perhaps best known for her roles as Colonel Wilma Deering in the science fiction television series Buck Rogers in the 25th Century and as Kate Summers-Stratton in the situation comedy Silver Spoons.

Gray was born on January 7, 1950, in Honolulu, Territory of Hawaii (now, the state of Hawaii), the daughter of Diane and Daniel Gray.[1] When Gray was eight, her parents separated.[2] Gray lived with her grandparents in Palm Springs for a few years. Eventually she and her mother moved to Larkspur, California. Gray attended Redwood High School[2] and then attended and graduated from Pacific Palisades High School. She briefly attended college at UCLA, focusing on math,[2] but she left school to pursue her career.
Read more...

In 1965, at age 15, Gray had a chance meeting with Nina Blanchard, head of one of Hollywood's top modelling agencies and became convinced to pursue a career in modelling.[citation needed] Within a few years Gray was considered one of the top models in New York City.[citation needed] During this period, she worked as spokeswoman for several accounts including L'Oréal, Max Factor and Bloomingdale's. "By 1975 Gray was one of the nation's top TV models, earning $100,000 a year."[2]

She developed an interest in acting, so she moved to Los Angeles, California, to pursue her Hollywood career.[3][4][5][6] Her first appearance on television had been in 1967 as a dancer in the variety series, Malibu U. In 1978, shortly after moving to California, she landed her first starring role, on the miniseries Evening in Byzantium. Following good notices, in 1978, Gray was put on a seven-year contract at Universal Studios, which led directly to her taking the role of Colonel Wilma Deering in Buck Rogers in the 25th Century, at first for a theatrically released movie, then for a weekly TV series.[7] Gray's trim, shapely figure, augmented by a tight one-piece jumpsuit uniform, was popular with the show's predominantly young male audience. Gray commented that she was aware of the sexiness of her uniform which was so tight that she had to be sewn into it. Her character was also high-profile within the show, being the female lead and second only to Gil Gerard in the starring role, thus representing one of the early examples of a strong female character in a science fiction setting. Because of this Gray was seen as an important role model for female viewers. She once told an interviewer:

I was the first female colonel. I enjoyed being that kind of role model for young women watching the show. A woman can be a colonel! A woman can be in charge! Those were new ideas then.[8]

Shortly after Buck Rogers, Gray appeared in the first season Magnum, P.I. episode, "J. 'Digger' Doyle", in which she played security expert, Joy 'Digger' Doyle. The role was planned to become recurring, even possibly a spin-off series,[citation needed] but neither occurred, and it was the character's only appearance in the series. In 1982, she played the role of Lilah in the summer movie Six Pack as a love interest opposite Kenny Rogers. Gray's role as Kate Summers in the TV sitcom Silver Spoons lasted for several years in the 1980s.[7] When that show ended, she took regular film and TV work; she appeared in an episode of Superboy and Murder, She Wrote. In 1993, she had a featured role in Jason Goes to Hell: The Final Friday, the ninth entry in the Friday the 13th series. In 2005, she appeared in the film, Siren.

In 2010, Gray and Gil Gerard returned to Buck Rogers by playing the characters' parents in the pilot episode of Buck Rogers web series.[9] She has also worked in commercials,[10] including a 2010 spot for Pup-Peroni dog treats.[11]

In 1998, Gray wrote a book Act Right with Mara Purl which contains advice for novice television and movie actors.[16] A revised edition was published in 2002.[17]

Gray starred in the 2011 film Dreams Awake (with "Alien Nation" co-star Gary Graham). She also plays the role of Madeline Twain on the webseries The Guild.

Gray has also guest-starred in the 2014 webisode "Lolani" from the web series Star Trek Continues as Commodore Gray, an episode that also starred Lou Ferrigno. She reprised the role in the episode "Embrace The Winds."

Gray has been married twice. She met her first husband, Ken Schwartz, in high school.[2] Although Schwartz was a successful real estate executive, he eventually became her manager after her acting career became significant.[2] The marriage lasted from 1968 to 1990. They had one son, Kevan Ray Schwartz, born in 1976.