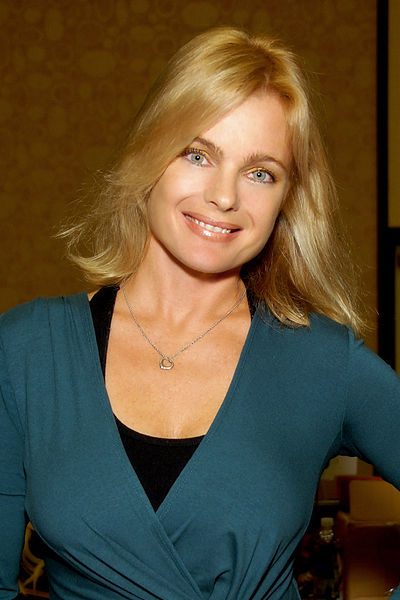 Erika Eleniak (born September 29, 1969) is an American-Canadian actress, Playboy Playmate, and former model best known for her role in Baywatch as Shauni McClain. Her film debut was a small part in E.T.: The Extra-Terrestrial (1982). She later starred in the films The Blob, Under Siege, and The Beverly Hillbillies.

Eleniak was born in Glendale, California.[1] She is the eldest daughter in a family of four girls and one boy. Her father, who was born in Edmonton, Alberta, is of Ukrainian descent and her mother is of Estonian and German ancestry.[citation needed] Eleniak's parents are divorced.[2]

In 1989 when she was 19, Eleniak appeared in the July 1989 issue of Playboy in a pictorial with a nautical theme.

In 1989, Eleniak had a recurring role on the TV series Charles in Charge as Charles's girlfriend, Stephanie Curtis. That same year, she won a role on Baywatch as female lead Shauni McClain, which she played from 1989 to 1992, leaving after the second episode of season three. She also played Carrie, the high-school girlfriend of Jesse (John Stamos), in "One Last Kiss", the November 16, 1990 episode of Full House.

Eleniak's first feature-film role was in the 1982 film E.T. the Extra-Terrestrial as the girl kissed by Elliott in the classroom scene. Her first film role as an adult was as Vicki De Soto, a victim of the creature in the 1988 horror remake The Blob.

In 1992, Eleniak returned to film acting, playing Jordan Tate, a Playboy Playmate hired to do a striptease for the captain of the U.S. Navy battleship, USS Missouri, in Under Siege. In the film, she is described as "Jordan Tate, Miss July 1989"—which is the month that Eleniak was Playmate of the Month in real life.

She had a starring role as Elly May Clampett in the screen adaptation of The Beverly Hillbillies in 1993. The next year, she starred in the Dennis Hopper-directed romantic comedy film Chasers. William McNamara, one of her co-stars in this film, also became her fiancé for a brief period. Eleniak went on to shoot another movie with McNamara, Girl in the Cadillac (1995). Eleniak also starred in an interactive game during 1995; she played identical twins in the 1995 video game Panic in the Park. She continued to make more independent films including A Pyromaniac's Love Story (1995), Bordello of Blood (1996), and Ed McBain's 87th Precinct: Heatwave (1997), The Pandora Project (1998) with Daniel Baldwin, One Hot Summer Night (1998) with Barry Bostwick, Final Voyage (1999) with Ice-T, Stealth Fighter (1999), The Opponent (2000), Vegas, City of Dreams (2001) with Angelica Bridges, Second to Die (2002), Shakedown (2002), Snowbound (2001), Betrayal (2003), and Strike Force (2003).

Eleniak appeared as one of the cast members of the reality television series The Real Gilligan's Island for its second season, which started in June 2005.[3]

Eleniak suffered from weight issues throughout her life. At one point, she was underweight due to an eating disorder and was once hospitalized because of laxative abuse.[4] By 2006, she was overweight, and became a participant on the fourth season of VH1's reality television series Celebrity Fit Club, on which two teams of celebrities compete to lose weight.

In 2006, she appeared on 80's Movie and Music Fest Cafe, a British comedy podcast on iTunes, in which she discussed her career with presenters Ross Dyer and Julian Bayes. She gave a lighthearted view of Baywatch and her challenge during filming of Celebrity Fit Club.[5]

Eleniak was once engaged to her Baywatch co-star Billy Warlock, who had played her love interest on the show, as well.[6] Eleniak married Philip Goglia on May 22, 1998, but after just six months, that marriage ended in divorce.[7][8] After filming Snowbound in 2001 in Calgary, Alberta, Eleniak became enamored of the city. She began dating Roch Daigle, a key grip who worked on the set. She had wanted to leave Los Angeles for years and found commuting to and from Telluride, Colorado, difficult. She purchased a home in Calgary, where Daigle lived.[2] Eleniak became pregnant in 2005, but six and a half weeks into her term, the pregnancy was discovered to be ectopic, which required emergency surgery days later. It ended in miscarriage. Eleniak soon became pregnant again with her daughter Indyanna born in January 2006.[9]