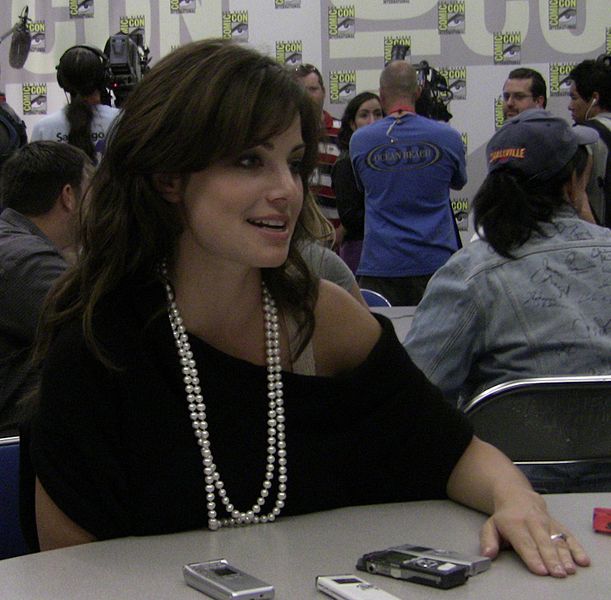 Erica Durance (/dəˈræns/; born June 21, 1978)[2] is a Canadian actress. She is known for her television roles, portraying Lois Lane in the series Smallville, and as Dr. Alex Reid in the medical drama series Saving Hope.

Durance was born in Calgary to parents Gail and Joel Durance, and grew up on a turkey farm with her older brother and sister in Three Hills, Alberta, Canada.[3] She was trained as a classical singer from childhood. After graduating from high school, Durance moved to Vancouver in 1999, to pursue her interest in acting professionally.[4] She continued to study acting at the Yaletown Actors Studio for many years with her coach and husband, David Palffy.
Read more...

Durance began her career with background work, graduating to commercials and guest-starring roles.[3] Durance made her feature film debut in the movie The Untold (2002). She guest-starred on the comedy series The Chris Isaak Show and the supernatural series The Collector. In Tru Calling, her character was a contender in a beauty pageant opposite Eliza Dushku. On the SyFy Channel, she played an intergalactic librarian in Andromeda and a love interest for Teal'c on Stargate SG-1.

Durance rose to prominence in 2004, after being cast as Lois Lane on the television series Smallville, playing a sassy, street-smart teenage Lois in season four. Executive Producer Kelly Souders recalled hiring Durance stating: "There were a lot of wonderful actresses who came in for the role, but I remember sitting and watching her tape and everybody was like, 'That’s her. There's no question.'"[5] Fellow producer Brian Peterson added that from the moment Durance was hired they knew she would be Lois for the series.[6] Durance was promoted to series regular in season five and became part of the regular cast for the remainder of the series run. On playing Lois Lane Durance said: "Everyone has their specific idea of who Lois Lane is for them, and you have your overall blueprint, but then you have to try to make it your own. That's the only way to try to stay truthful to what you're doing.[7] It's an experience I will cherish always and never forget. Lois is a beloved character. I took that seriously and put my heart and soul into her for seven years. I enjoyed every minute and am forever changed by it."[4]

Durance appeared in the films The Butterfly Effect 2 (2006) and Island Heat: Stranded (2006). She was nominated for a Gemini Awards for the Lifetime movie I Me Wed (2007). She starred as Maid Marian in Beyond Sherwood Forest (2009) and appeared in the film Sophie and Sheba (2010) as an Aerial silk performer in the circus.[8][9] In 2011, she guests starred in the television series Charlie's Angels as CIA operative Samantha Masters.[10] She played twin sister Angela/Christine in the Italian TV mini-series 6 passi nel giallo and appeared in the NBC series Harry's Law in 2012.[11][12]

In June 2012, Durance began starring in the lead role in the CTV medical drama television series Saving Hope, as Chief Surgical Dr. Alex Reid.[13][14] She was also a producer on the series and directed the season four episode "Torn and Frayed."[15] In season 3, Durance's real-life pregnancy was worked into her character Alex Reid and the series. Saving Hope ended its run in 2017.

Durance starred in the Hallmark Movies & Mysteries channel movie Wedding Planner Mystery (2014). The movie is based on Deborah Donnelly's novel Veiled Threats and was supposed to be the first film in the channel's Mystery Wheel series adaptation. [16] The story follows Carnegie Kincaid, a wedding planner, and a perfectionist, trying to clear her name after she became a murder suspect. In 2015, she appeared in the thriller film Painkillers with Tahmoh Penikett.[17]

Since October 2017, Durance appears in The CW television series Supergirl as Kara's Kryptonian mother, Alura Zor-El, in a recurring role in season three.[18]

Durance is a supporter of World Vision Canada.[19] In August 2006, she co-hosted the Superman/Batman #26 art auction at the Wizard World Chicago convention, with comic book writer and Smallville producer Jeph Loeb.[20] Durance refused her appearance fee and donated the money towards the auction. The auction raised $70,000.[21] The event honored Loeb's son, Sam Loeb, who died at age 17 after a long battle with bone cancer, and all of its proceeds went to the Sam Loeb College Scholarship Fund.[22]

Durance was married to Wesley Parker from 1996 to 1999. She began dating Canadian actor, writer and director David Palffy in 2001 and married him in 2005. In September 2014, Durance revealed she was pregnant with the couple's first child and gave birth to a boy in February 2015.[27][28] Durance announced she was pregnant with her second child in June 2016.[29] Her second son was born in December 2016.[30] She also has a stepson from her husband's previous relationship. Durance and her husband reside in Vancouver, British Columbia.[31]