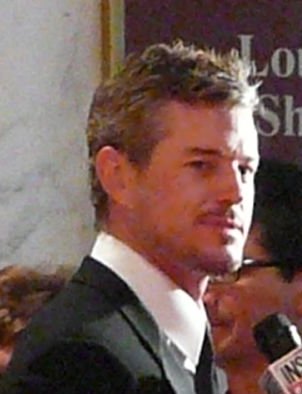 Eric Dane (born Eric T. Melvin, November 9, 1972)[1][2] is an American actor. After appearing in television roles throughout the 2000s with his recurring role as Jason Dean in Charmed being the most well known, he became best known for playing Dr. Mark Sloan on the medical drama television series Grey's Anatomy, as well as films, co-starring in Marley & Me (2008), Valentine's Day (2010), and Burlesque (2010). He stars as Captain Tom Chandler in the apocalyptic drama The Last Ship.

Dane was born in San Francisco, California,[1] to a homemaker mother and an interior designer/architect father,[3] William Melvin.[4][5] When Dane was 7 years old, his father died of a gunshot wound.[6][7] Dane has a younger brother,[8] and they were raised in their mother's Jewish religion (Dane had a Bar Mitzvah ceremony).[9][10][11] He attended Sequoia High School in Redwood City, California, from 1987 to 1990, and San Mateo High School in San Mateo, California, from 1990 to 1991, where he graduated. Dane was an athlete in high school, playing on the boys' varsity water polo team,[12] but pursued a career in acting after appearing in a school production of Arthur Miller's All My Sons.[13][14]
Read more...

In 1993, Dane moved to Los Angeles,[12] where he played small roles in the television series Saved by the Bell, The Wonder Years, Roseanne, and Married... with Children, among others. But in 2000, he was signed for a recurring role in Gideon's Crossing, and followed this with a two-season run as Jason Dean in Charmed. His made-for-television film credits included two biopics, Serving in Silence (about Margarethe Cammermeyer's experiences in the military), and Helter Skelter, in which he portrayed Charles "Tex" Watson, a member of the Manson family.

Dane's first major feature film appearance was in The Basket. He also appeared in Zoe, Duncan, Jack & Jane, Sol Goode, Feast, X-Men: The Last Stand, and starred in Open Water 2. In 2005, Dane guested as Dr. Mark Sloan (nicknamed "McSteamy" by Meredith Grey) in "Yesterday", the eighteenth episode of the second season of the ABC medical drama Grey's Anatomy. Positive audience reaction to the character led to Dane's becoming a regular in the show's third season. His first appearance in the season, in which he walked out of the bathroom soaking wet and wearing only a strategically placed towel, was labeled a "watercooler moment".[15] Dane resigned from the show after the end of season 8, but appeared in the first two episodes of season 9.

In December 2006, he starred in the A&E television film Wedding Wars as the brother of a gay man (played by John Stamos) who goes on strike in support of marriage equality. Dane, alongside Patrick Dempsey, appeared in the same big-screen project, the 2010 romantic comedy Valentine's Day. The Garry Marshall-directed film followed five interconnecting stories about Los Angelenos anticipating (or in some cases dreading) the holiday.[16]

In October 2012, Dane joined the main cast of the Michael Bay-produced TNT drama series The Last Ship.[17] He is also credited as a producer on the show.

Dane made headlines when he participated in a nude tape with his wife and Kari Ann Peniche.[22]

In June 2011, Dane entered a California treatment center to rectify a dependency on prescription drugs he had developed after suffering a sports injury.[23]

In April 2017, The Last Ship halted production through Memorial Day to allow Dane to deal with the depression he was battling.[24]

Report a problem
Write to Eric Dane at FanPal • 2020