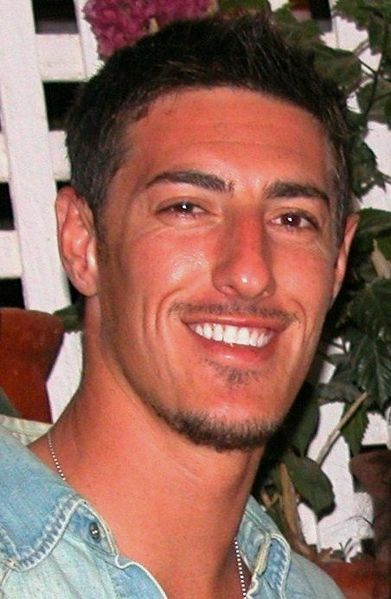 Eric Salter Balfour (born April 24, 1977) is an American actor and singer. He is the lead singer of Born As Ghosts, formerly known as Fredalba. He made his film debut in the drama Shattered Image (1998), followed by roles in What Women Want (2000) and The Texas Chainsaw Massacre (2003). His roles on television include Milo Pressman on the action-thriller TV series 24, a supporting guest role in the HBO drama Six Feet Under, and Duke Crocker in the supernatural series Haven.

Balfour was born to a Jewish family[1][2][3] in Los Angeles, California, the son of David Balfour, a chiropractor and Sharon (née Salter), who works as a marriage and family counselor.[4] He has a younger sister, Tori.[5]

He described his household growing up as "creative," and said that his family would often make trips to the Esalen Institute in Big Sur.[6]

Balfour appeared on the kids TV show Kids Incorporated for one season in 1991. During the early 1990s, he had a variety of minor juvenile roles on such television series as: Dr. Quinn, Medicine Woman, Arresting Behavior, Boy Meets World and Step by Step. In 1997, he appeared in the pilot for Buffy the Vampire Slayer, as one of the show's first victims, Jesse McNally. He appeared as a regular cast member in three short-lived TV shows. ABC's Veritas: The Quest was cancelled after four episodes in 2003, NBC's Hawaii was canceled after seven episodes in 2004, UPN's Sex, Love & Secrets was canceled after four episodes. Also in 2005, Balfour starred in the sexually explicit Canadian drama Lie with Me opposite Lauren Lee Smith. In March 2006, Balfour debuted as Brian Peluso on producer Dick Wolf's short-lived NBC crime drama, Conviction, which lasted one season. Balfour was also a guest star on the hit show Dawson's Creek, in the ninth episode of the first season.[7]

He starred in the 2003 remake of The Texas Chainsaw Massacre opposite Jessica Biel. He played a minor character in several episodes of The O.C., as Eddie, Theresa's fiancé, and in the hit HBO show, Six Feet Under, as Claire Fisher's boyfriend, Gabriel Dimas.

He was the face for the new Valentino male fragrance, Valentino V. In September 2009, Balfour appeared in an episode of Monk. In that same month, Balfour booked a recurring role on the new CW drama show The Beautiful Life, but the show was canceled after its second episode and production was shut down immediately. In 2010, he starred in the Strause Brothers thriller film Skyline.[8] He starred as Duke Crocker on the Syfy drama Haven. Balfour co-starred with Missy Peregrym and Jeff Roop, in the creature film Backcountry.[9] he appeared as Spiro Dalon on the 10/24/18 episode of Chicago PD.