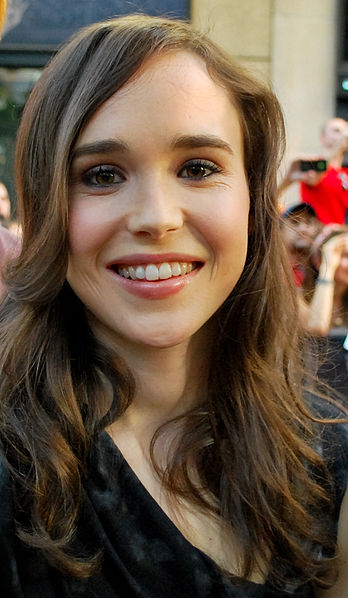 Ellen Grace Philpotts-Page[1] (born February 21, 1987)[2][3] is a Canadian actress and producer. Her career began with roles in Canadian television shows including Pit Pony, Trailer Park Boys, and ReGenesis. Page starred in the 2005 drama Hard Candy, for which she won the Austin Film Critics Association's Award for Best Actress. Her breakthrough role was the title character in Jason Reitman's comedy film Juno (2007), for which she received nominations for Academy Award, BAFTA, Golden Globe and Screen Actors Guild Award for Best Actress, and won awards including the Independent Spirit Award, MTV Movie Award and Teen Choice Award for Best Actress Comedy.

Page portrayed Kitty Pryde in the X-Men series of films. She also appeared in the crime-drama film An American Crime (2007); the drama The Tracey Fragments (2007), a role that won her the Vancouver Film Critics Award for Best Actress; Smart People (2008); the sports-comedy-drama film Whip It (2009); Super (2010); and Inception (2010). She also provided the voice acting, motion capture, and likeness for the character Jodie Holmes in the video game Beyond: Two Souls (2013).

Page was born and raised in Halifax, Nova Scotia, the daughter of Martha Philpotts, a teacher, and Dennis Page, a graphic designer.[4] She attended the Halifax Grammar School until grade 10, spent some time at Queen Elizabeth High School, and graduated from the Shambhala School in 2005. She also spent two years in Toronto, Ontario, studying in the Interact Program at Vaughan Road Academy, along with close friend and fellow Canadian actor Mark Rendall.[5][6] Growing up, Page enjoyed playing with action figures and climbing trees.[7]
Read more...

Page first acted in front of the camera in 1997 at age ten in the CBC television movie Pit Pony, which later spun off into a television series. This led to more roles in several small Canadian films (including Marion Bridge, her first feature film role) and in television series, notably playing Treena Lahey in season two of Trailer Park Boys. At 16, she was cast in Mouth to Mouth, an independent film shot in Europe. Page starred in the 2005 movie Hard Candy as a young girl who takes a pedophile hostage, and won praise for "one of the most complex, disturbing and haunting performances of the year."[8]

Page appeared in X-Men: The Last Stand (2006)[9] and X-Men: Days of Future Past (2014) as Kitty Pryde, a girl who can walk through walls. In the previous X-Men movies, the part had been used in brief cameos played by other actresses, but never as a main character. Page was nominated for the Teen Choice Award for Choice Movie Scene Stealer for the role.

Page portrayed the title character in the 2007 film Juno. Film critic A. O. Scott of The New York Times described her as "frighteningly talented"[10] and Roger Ebert said, "Has there been a better performance this year than Ellen Page's creation of Juno? I do not think so."[11] Page was nominated for an Academy Award for Best Actress, but lost to Marion Cotillard in La Vie en Rose. The role, however, did win her more than 20 awards, including a Canadian Comedy Award, an Independent Spirit Award, and a Satellite Award besides the likes of numerous Critics awards including Detroit Film Critics Society, Austin Film Critics Association and Florida Film Critics Circle.

Page also co-starred in Smart People, which premiered at the 2008 Sundance Film Festival. Shot before Juno, but released afterwards, the film saw her playing overachieving daughter to Dennis Quaid's college professor.[12] Page's other film credits include An American Crime, which premiered at the 2007 Sundance Film Festival; The Tracey Fragments, which was released in November 2007 in Canada and May 2008 in the US; and The Stone Angel.

In 2007, she was attached to play the title character in an adaptation of Charlotte Brontë's Jane Eyre[13][14] and had planned to work on an as-yet unmade film entitled Jack and Diane opposite Olivia Thirlby, with whom she co-starred in Juno,[15] but it was announced in August 2009 that her role in Jack and Diane would be played by the actress Alison Pill. Before his death in January 2008, Heath Ledger had discussed with Page the idea of starring in his directorial debut, The Queen's Gambit.[16]

In 2008, she was ranked #86 on FHM's Sexiest Women in the World list, and placed at #93 for 2009.[17] In June 2008, Page was listed in Entertainment Weekly's future A-List stars list.[18] Page hosted Saturday Night Live on March 1, 2008.[19] On May 3, 2009, she guest starred in the episode "Waverly Hills 9-0-2-1-D'oh" of the animated series The Simpsons as a character named Alaska Nebraska, a parody of Hannah Montana.[20] She also starred in Drew Barrymore's directorial debut, Whip It, alongside Juliette Lewis, Marcia Gay Harden, Drew Barrymore and Kristen Wiig.[21] The film premiered at the 2009 Toronto International Film Festival and had its wide release on October 2, 2009.[22]

She featured in Michael Lander's film Peacock, opposite Cillian Murphy, Susan Sarandon, Bill Pullman and Josh Lucas, which was released in 2010 despite an original release date of 2009.[23][24] In August 2009, Page began shooting the big-budget Christopher Nolan thriller Inception, alongside co-stars Leonardo DiCaprio, Marion Cotillard, Joseph Gordon-Levitt and Ken Watanabe.[25] The film was released on July 16, 2010.[26] She has starred in the film Super,[27] and was announced to be playing Stacie Andree in a film about Laurel Hester,[28] finally released in 2015 as Freeheld.

Page at the San Diego Comic-Con International in July 2013

As of 2010[update], she serves as a spokesperson for Cisco Systems in a series of advertisements, appearing in three commercials set in Lunenburg, Nova Scotia. On May 26, 2010, it was reported in a column on Deadline Hollywood and by Entertainment Weekly that Page would star in the HBO series Tilda alongside Diane Keaton, who was cast in the lead role. Tilda is based on the life of Nikki Finke, the founder of the influential Hollywood blog, DeadlineHollywood.com.[29] Tilda was reportedly dropped by HBO due to friction between the creators.[30] She is also the narrator of the documentary on colony collapse disorder, Vanishing of the Bees, directed by Maryam Henein.

In April 2011, it was announced that Page would co-star in the Woody Allen film To Rome with Love alongside Jesse Eisenberg, Penélope Cruz, and Alec Baldwin.[31] In June 2012, Quantic Dream announced a video game entitled Beyond: Two Souls in which Page and Willem Dafoe portray the protagonists Jodie Holmes and Nathan Dawkins, respectively. It was released on October 8, 2013, in North America.[32][33][34] Page reprised her role as Katherine "Kitty" Pryde in X-Men: Days of Future Past (2014).[35][36] In February 2013, Page confirmed that her directorial debut would be titled Miss Stevens and would star Anna Faris and be produced by Gary Gilbert, Jordan Horowitz and Doug Wald;[37][38] the project eventually moved forward without Page, with scriptwriter Julia Hart replacing Page as the director.[39] In December 2014, Page portrayed Han Solo in a staged reading of Star Wars Episode V: The Empire Strikes Back.[40]

Page co-starred in Zal Batmanglij's 2013 thriller film The East a movie inspired by the experiences and drawing on thrillers from the 1970s, alongside Brit Marling and Alexander Skarsgård; Page replaced Felicity Jones, who had been attached to the project, but later dropped out.[41] The same year she starred in Lynn Shelton's Touchy Feely alongside Rosemarie DeWitt.[42] Page starred in the film Tallulah alongside her Juno costar, Allison Janney,[43] and had two other releases slated for 2015, Canadian drama film Into the Forest and Peter Sollett's Freeheld.[44]

In 2008, Page was one of 30 celebrities who participated in an online ad series for US Campaign for Burma, calling for an end to the military dictatorship in Burma.[45] She describes herself as a pro-choice feminist.[46] She attended Buddhist school in her youth and practised meditation and yoga.[47] She practices a vegan lifestyle, and PETA named her and Jared Leto the Sexiest Vegetarians of 2014.[48] She is an atheist.[49]

On November 10, 2017, Page alleged that filmmaker Brett Ratner outed her as gay on the set of X-Men: The Last Stand, when she was 18 years old, nearly a decade before she came out publicly in 2014.[55][56] Fellow actress Anna Paquin expressed support of Page, stating that she was present when Ratner made the comment.[55]