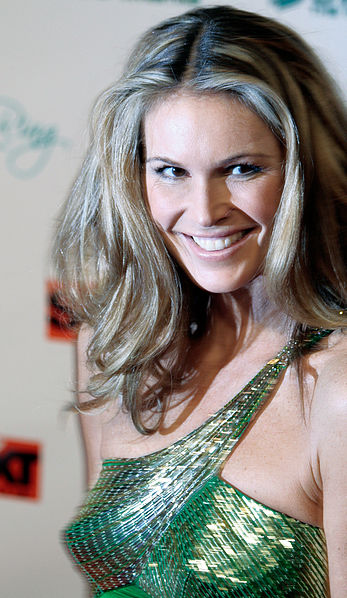 She is known for her record five cover appearances for the Sports Illustrated Swimsuit Issue beginning in the 1980s, leading to her nickname "The Body", coined by Time in 1989. She is the founder, primary model, and creative director for a series of business ventures, including Elle Macpherson Intimates, a lingerie line, and The Body, a line of skin care products. She has been the host and executive producer of Britain & Ireland's Next Top Model from 2010 to 2013. She is an executive producer of NBC's Fashion Star and was the host for the first season.

As an actress, Macpherson appeared in supporting roles in The Mirror Has Two Faces (1996) and as Julie Madison in Batman and Robin (1997) as well as lead roles in The Edge (1997) and South Kensington (2001). She also had a recurring role on Friends and hosted an episode of Saturday Night Live.

Macpherson was born Eleanor Nancy Gow in Killara, New South Wales in 1964, the daughter of entrepreneur and sound engineer Peter Gow, a former president of a Sydney rugby league team, the Cronulla-Sutherland Sharks, and Frances Gow, a nurse.[5] Macpherson's parents divorced when she was 10 years old, and she moved with her mother and two siblings. Her mother later remarried, and a clerical mistake in registering at her new school meant that her surname was changed from Gow to Macpherson (her stepfather's surname).[6][7]

Macpherson grew up in East Lindfield, a suburb in the Sydney's North Shore, and attended Killara High School, completing her Higher School Certificate in 1981. She briefly studied law for one year at the University of Sydney. Her sister is a businesswoman and environmentalist Mimi Macpherson, born Miriam Frances Gow.[8]

Rise to fame as model

Macpherson enrolled to study law at Sydney University. Before beginning her university studies, she visited the United States to spend one year doing modelling work to earn money to pay for her law books.[9] She travelled to New York City, where she initially signed up with Click Model Management. Her modelling career began in 1982 with a television commercial for Tab which established her as a "girl next door" figure in Australia.[10]

During the 1980s, Macpherson's profile quickly rose and she appeared on the cover of major magazines including Elle, Harper's Bazaar, Marie Claire, British and Australian Vogue, Cosmopolitan, Tatler, GQ, Time, L'Officiel, Flare and New York.[11] She cemented her high-profile through frequent appearances in Elle, featuring on numerous covers and appearing in every issue for six straight years. During that time, at the age of 21, she married Gilles Bensimon, the creative director of Elle.[12] In 1985, Macpherson became the longtime face of luxury French skin care company Biotherm.[13]

After appearing nude in the 1994 film Sirens, Macpherson learned that the media had begun searching for nude photos of her, including contacting her ex-boyfriends. To address this, Macpherson appeared in a nude pictorial in the May 1994 issue of Playboy magazine, shot by Herb Ritts, to produce nude photos "on her own terms".[17] In 1999, the twin island nation of Antigua and Barbuda honored Macpherson by using her face on a series of postage stamps, the first model to appear on legal tender.[18] Macpherson appeared among other Australian icons during the 2000 Summer Olympics closing ceremony, her elaborate float resembling a camera lens and featuring a runway.[19] Along with Naomi Campbell, she co-hosted the Miss Universe 2001 pageant. Her popularity had reached such a level that Australian government offered her a position on its tourist commission as an unofficial ambassador.[20]

During her career, Macpherson has worked with fashion photographers including Francesco Scavullo, Mario Testino,[21] Mert and Marcus, Ellen von Unwerth[22] and Steven Meisel. Portraits of Macpherson, shot by Bob Carlos Clarke, were among those donated to the National Portrait Gallery, London by his family following his death.[23] Macpherson received the Style Icon award at the 2006 Elle Style Awards presented by fashion magazine Elle.[24] In March 2008, she signed a three-year deal with Revlon Cosmetics, which named her a Global Brand Ambassador.[25] She has since been featured in print and advertising campaigns for the company. She returned to the runway in 2010 to close the fall Louis Vuitton show for Marc Jacobs in Paris.[26]

Macpherson in September 2008 at Fashion Fest

In the 1980s, together with Linda Evangelista, Christy Turlington, Tatjana Patitz, Naomi Campbell, Pavlína Pořízková, and Cindy Crawford, Macpherson became part of the new generation of supermodels.[27] In 1989 she was given the nickname Elle "The Body" Macpherson by Time magazine after she appeared on their cover. She went on to use the name in a number of business ventures.[28] In 1996, Frank DeCaro of The New York Times cited Macpherson, along with Linda Evangelista, Christy Turlington, Cindy Crawford, Naomi Campbell, Helena Christensen and Claudia Schiffer as "The Magnificent Seven". DeCaro reflected, "Known by their first names to legions of fans, they are the legends of the modern catwalk, the girl next door pretty underneath all the paint".[29]

In 1994, she left her agency, Ford Models, to form her own company, Elle Macpherson Inc., which would serve as the financial organizational base for her later endeavours.[27] She soon went on to produce her own highly popular series of calendars, each of which was accompanied by a "making of" television program in 1992, 1993, and 1994. She used this success as a springboard to create the "Your Personal Best - The Body" series of workout videos.[27]

She later diversified her portfolio of businesses, and in 1990 launched her lingerie collection 'Elle Macpherson Intimates' in partnership with Bendon Limited Apparel. Intimates met with remarkable international success, becoming the single best-selling lingerie line in both Great Britain[30] and Australia.[31]

The partnership was among the first instances of a crossover between a model and a fashion label. In 1989, when she was first approached by Bendon to promote their lingerie in Australia, Macpherson saw an opportunity to reverse their strategy and suggested a licensing arrangement, with products bearing her name and designs created in partnership with Bendon's team. Though commonplace now, the idea was unorthodox at the time.[32]

Macpherson took a significant role n the development and management of the company, serving as chief marketing officer and later Creative Director. In January 2010, Macpherson expanded the line, launching Obsidian as a sub-brand.[33] While nursing her second child, she spearheaded the development of a signature maternity bra line.[34] Intimates has retained a high brand recognition into the 2000s, appearing as a featured brand on America's Next Top Model; last year, the brand celebrated 10 years of being stocked at Selfridges.[citation needed]

Macpherson has also created her own line of beauty products: "Elle Macpherson - The Body". The line was carried at Boots,[35] and Australian suncare brand Invisible Zinc.[36] She spent a year on the board of directors at Hot Tuna Clothing, advising on product development, brand positioning and sales strategy.[37]

In 2007, the BBC TV series The Money Programme aired a documentary which followed Macpherson through her day-to-day business as she continued to develop her international lingerie business. In 2009 Macpherson delivered the Keynote Address at the annual meeting of the International Trademark Association.[38]

In 2014, Macpherson co-founded WelleCo, and released its flagship product, an alkalising wellness supplement, The Super Elixir. The product, sold at retailers including Selfridges in London and the premium online retailer, Net-A-Porter has celebrity fans including Kate Moss.[39][40]

Macpherson has received a number of awards recognising her business acumen and the success of Elle Macpherson Intimates. In 2005, she was named Glamour Magazine's Entrepreneur of the Year;[41] in 2007, she received an Everywoman Ambassador Award recognising her success as a businesswoman;[42] in 2008, the Underfashion Club's Femmy Awards crowned her Lingerie Designer of the Year; in 2009, she received a World Career Award from the Women's World Awards.

Macpherson made her film debut playing an artist's model in the 1994 film Sirens, which starred Hugh Grant, Sam Neill, and Tara FitzGerald. She followed with a two-year sequence of film roles, appearing in films such as Woody Allen's Alice, Batman & Robin alongside George Clooney, The Edge with Anthony Hopkins, and The Mirror Has Two Faces with Barbra Streisand. In 1996 Macpherson hosted an episode of Saturday Night Live.[43]

In 1999, Macpherson appeared in five episodes of the American TV series Friends as Joey Tribbiani's roommate and eventual girlfriend, Janine Lecroix. Macpherson went on to act in the movie Jane Eyre with William Hurt, and she has also appeared alongside Ben Stiller and Sarah Jessica Parker in If Lucy Fell. Her most controversial acting role was in the Showtime cable network miniseries, A Girl Thing, as a woman experimenting with bisexuality. In 2001, she appeared in the Italian movie South Kensington. She played agent Claudia Foster in The Beautiful Life, appearing with Mischa Barton, Sara Paxton and Corbin Bleu. The show centred on aspiring models working for a modelling agency, trying to make it big in New York City and in the fashion world.[44] In March 2011, she starred with Gary Lineker in an advertisement for Walkers Crinkles.[45]

Britain and Ireland's Next Top Model

According to a police statement reproduced online, between 11 and 22 July 1997 William Ryan Holt and Michael Mischler broke into Macpherson's Los Angeles home while she was away on business in Chicago.[48] They stole an estimated $100,000 worth of jewellery, $6,000 in cash, and several photographs. The two were arrested on 4 August 1997. Mischler, 29, pleaded guilty to one count of attempted extortion and one count of burglary. He received a six-year and eight-month prison sentence. Holt, 26, a former US Air Force enlisted man and a military-justice convict out on parole, pleaded guilty to one count of extortion, and was sentenced to a year in prison.[49]

Macpherson is a European Ambassador for RED, an initiative set up by Bono and Bobby Shriver to raise money and awareness for the Global Fund to Fight AIDS, Tuberculosis and Malaria[50] and to help eradicate AIDS for women and children in Africa. She is also an ambassador for UNICEF.[51]

In Australia, she is an ambassador for the Smile Foundation, which helps the families of children with rare diseases and organises government research grants.[6][7] She has also modelled for charitable causes including fundraising for 2007 British flood victims,[52] and child welfare group Absolute Return for Kids.[53]

In 2012, Macpherson led Sky's campaign for International Women's Day.[54] MacPherson is a patron for the National Association for the Children of Alcoholics (NACOA).[55]

Macpherson dated Billy Joel during the early 1980s, prior to his marriage to Christie Brinkley. Joel has said that the songs "This Night" and "And So It Goes" were written about his relationship with Macpherson.[56] Macpherson is also believed to be at least part of the inspiration for Joel's track "Uptown Girl".[57]

Macpherson met French fashion photographer Gilles Bensimon in 1984 on a photo session for Elle magazine. They wed in May 1986, and divorced three years later.[58][59]

Macpherson began a relationship with London-based French financier Arpad Busson in 1996.[60] They have two sons together: Arpad Flynn Busson, known as Flynn (born February 1998 in New York City),[61] and Aurelius Cy Andrea Busson (born February 2003 in London).[62] The family lived together in London until Busson and Macpherson's separation in July 2005.[60]

Macpherson subsequently began dating Miami, Florida-based hotel heir and billionaire Jeffrey Soffer, son of Donald Soffer, in early 2009.[63] They broke up in March 2012,[64] but reconciled following his injury in a helicopter accident in November 2012.[64] They became engaged in March 2013,[64] and married in July 2013 at the Laucala Resort in Fiji.[65][66]

After living for many years in the UK,[67] it was reported that Macpherson also lives in Florida, where Soffer is based.[68] Besides English, she speaks fluent French and can converse in Italian and Spanish.[34]

In 2017 Macpherson and Soffer announced that they were getting a divorce.[69]