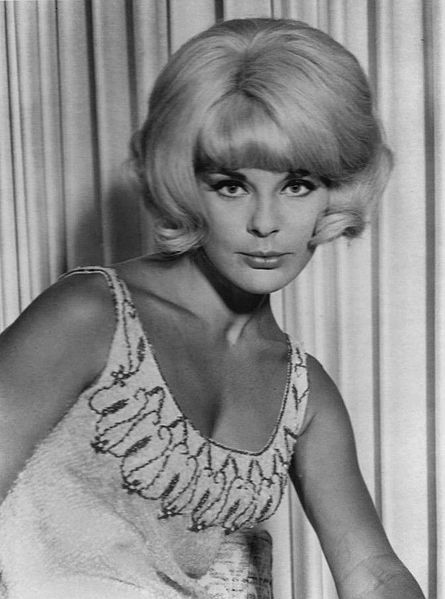 Sommer was born in Berlin to Baron Peter von Schletz, a Lutheran minister, and his wife Renata, nee Topp. During the Second World War (in 1942) the family was evacuated to Niederndorf, a village near Erlangen, a small university town in Franconia, where she attended the Gymnasium (high school). Her father died when she was 14 years old. She graduated from high school with an Abitur. After this, she moved to the UK to be an au pair, to perfect her English, and to earn a living. There, she also received some training as an interpreter.
Read more...

She was spotted by film director Vittorio De Sica while on holiday in Italy, and started appearing in films there in 1958. It was also in this year that she changed her surname from 'Schletz' to 'Sommer' which was easier to pronounce for a non-German audience. She quickly became a noted sex symbol and moved to Hollywood in the early 1960s. She also became one of the most popular pin-up girls of the time, and posed for several pictorials in Playboy Magazine, those for the September 1964 and December 1967 issues being most noteworthy.

She became one of the top film actresses of the 1960s and made 99 film and television appearances between 1959 and 2005, including A Shot in the Dark (1964) with Peter Sellers as Inspector Clouseau, The Art of Love (1965) with James Garner and Dick Van Dyke, The Oscar (1966) with Stephen Boyd, Boy, Did I Get a Wrong Number! (1966) with Bob Hope, the Bulldog Drummond extravaganza Deadlier Than the Male (1966), The Wrecking Crew (1968) with Dean Martin, and The Wicked Dreams of Paula Schultz (1968); Sommer was the leading lady in each of these films.

In 1964, she won a Golden Globe award as Most Promising Newcomer Actress for The Prize, a film in which she co-starred with Paul Newman and Edward G. Robinson.

Sommer and the Mexican actress Silvia Pinal in the Italian film Men and Noblemen (1959).

A frequent guest on television, Sommer sang and participated in comedy sketches on episodes of The Dean Martin Show and on Bob Hope specials, made 10 appearances on The Tonight Show Starring Johnny Carson, and was a panelist on the Hollywood Squares game show many times between 1973 and 1980, when Peter Marshall was its "Square-Master," or host.

Sommer's films during the 1970s included the thriller Zeppelin, in which she co-starred with Michael York, and a remake of Agatha Christie's oft-filmed murder mystery, Ten Little Indians. In 1972, she starred in two Italian horror films directed by Mario Bava: Baron Blood and Lisa and the Devil. The latter was subsequently re-edited (with 1975 footage inserted) to make a different film called House of Exorcism. Sommer went back to Italy to act in additional scenes for Lisa and the Devil that its producer inserted into the film to convert it to House of Exorcism, against the wishes of the director.[citation needed]

In 1975, Peter Rogers cast her in the British comedy Carry On Behind as the Russian Professor Vrooshka.[2] She became the Carry On films' highest-paid performer, at £30,000; this was an honour that she shared with Phil Silvers for Follow That Camel.

Most of her movie work during the decade came in European films. After the 1979 comedy The Prisoner of Zenda, which reunited her with Sellers, the actress did virtually no more acting in Hollywood films, concentrating more on her artwork.

Sommer also performed as a singer, recording and releasing several albums. (These had fallen out of print by early May 2017, by which date no discography was known to have been compiled for her either.)

She provided the voice for Yzma in the German release of The Emperor's New Groove.

In the 1980s, Sommer was hosting a syndicated program titled The Exciting World of Speed and Beauty.[3] When she subsequently gave up that engagement, Dan Pastorini was recruited to succeed her, but his tenure was not as successful as hers.

After the 1990s, Sommer concentrated more on painting than on acting. As an actress, she had worked in half a dozen countries learning the languages (she speaks seven languages) and storing up images which she has subsequently expressed on canvas. Her artwork shows a strong Marc Chagall influence.

Sommer was embroiled in a long-running feud with Zsa Zsa Gabor that had begun in 1984 when both had appeared on Circus of the Stars; this had escalated into a multimillion-dollar libel suit by 1993.[4]

In 2001, a Golden Palm Star on the Palm Springs, California, Walk of Stars was dedicated to her.[5]

As of early May 2017, Frau Baronin (Baroness) von Sommer was living in Los Angeles, California.

In 1964, she married Hollywood columnist Joe Hyams (6 June 1923 - 8 November 2008), who was 17 years older, in Las Vegas in front of a Justice of the Peace. Sommer suffered her first miscarriage while working on the set of The Money Trap, in which she co-starred with Glenn Ford and Rita Hayworth.

A second miscarriage followed exactly one year later during the filming of Boy, Did I Get A Wrong Number, in which she starred with Bob Hope under the direction of George Marshall.

In 1973, Sommer and Hyams tried again to start a family. While working on the set of Die Reise nach Wien she suffered her third miscarriage. By then her marriage was on the rocks.

Her mother, Renata von Schletz, accompanied her to film sets as well as on cinema tours even after Elke Sommer's marriage to Joe Hyams had failed and a new man came into her life: Tom Bohla. Bohla moved in with Sommer, who had separated from her husband, but was still sharing the house with him and had no intention of filing for divorce.

Then she met Wolf Walther, eight years her junior and the general manager of New York City's luxury hotel Essex House. They were married on 29 August 1993 in Franconia.[6] In a 2014 interview, Sommer described how she and Walther met:

"I was in New York City starring in Tamara and had to stay there for four months. So, I had to find an apartment but they were excruciatingly expensive, tiny and loud. As I knew the managing director of the Essex House, I wanted to talk to him about renting a room but the hotel had a new managing director, a man by the name of Wolf Walther. So we met. For him, it was love at first sight. For me, it took a little longer, but not much longer. As you may know, Tamara is a play in which the audience follows the actor of their choice, and as you may also know, my husband is 6'5" and hard to miss. I saw him every night in the audience, following me. Every night. And that was the beginning of the greatest love story of my life, still unfolding and getting better by the day."[7]