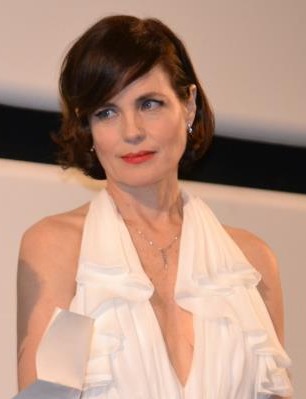 Elizabeth Lee McGovern (born July 18, 1961) is an American film, television, and theater actress, and musician. She received an Academy Award nomination for her role as Evelyn Nesbit in the 1981 film Ragtime. She is also known for her performance as Cora Crawley, Countess of Grantham in the British drama series Downton Abbey, for which she has been nominated for an Emmy Award and Golden Globe Award. Her other films include Ordinary People (1980), Once Upon a Time in America (1984), The Handmaid's Tale (1990) and The Wings of the Dove (1997).

McGovern was born in Evanston, Illinois, the daughter of Katharine Wolcott (née Watts), a high school teacher, and William Montgomery McGovern, Jr., a university professor.[2] Her younger sister is novelist Cammie McGovern. Her paternal grandfather was adventurer William Montgomery McGovern, her maternal great-grandfathers were U.S. diplomat Ethelbert Watts and Admiral Charles P. Snyder, and her maternal great-great-grandfather was Congressman Charles P. Snyder.[3][4][5] During her early years, the McGovern family moved to Los Angeles, where her father accepted a teaching position with the law school at UCLA.

Agent Joan Scott saw her performance in The Skin of Our Teeth by Thornton Wilder, was impressed by her talent, and recommended she take acting lessons.[citation needed] McGovern studied at the American Conservatory Theater in San Francisco, and graduated from The Juilliard School in New York City, a member of Group 12, 1979-1981[6]

In 1980, while studying at Juilliard, McGovern was offered a part in what became her first film, Ordinary People, in which she played the girlfriend of troubled teenager Conrad Jarrett (Timothy Hutton). The following year she completed her acting education at the American Conservatory Theatre and Juilliard, and began to appear in plays, first Off-Broadway and later in famous theaters.

In 1981 she earned an Academy Award nomination for Best Supporting Actress for her role as Evelyn Nesbit in the film Ragtime.[7]

In 1984, she starred in Sergio Leone's gangster epic Once Upon a Time in America as Robert De Niro's romantic interest Deborah Gelly. She had leading roles in two other films that year, Racing with the Moon, a coming-of-age story also starring Sean Penn and Nicolas Cage, and the comedy Lovesick, as a patient whose psychiatrist (Dudley Moore) falls in love with her, risking his practice.

In 1989, she played Mickey Rourke's girlfriend in Johnny Handsome, directed by Walter Hill, and the same year she appeared as a rebellious lesbian in Volker Schlöndorff's film The Handmaid's Tale.

McGovern co-starred with Kevin Bacon in a romantic comedy, She's Having a Baby, directed by John Hughes, and starred in the thriller The Bedroom Window, directed by Curtis Hanson. She teamed with Michael Caine in 1990's A Shock to the System, a comic mystery about a man who plots the murder of his wife.

In a 1994 comedy, The Favor, McGovern played a woman who cheats on her boyfriend (played by Brad Pitt) by becoming her married best friend's proxy in a tryst with a man the friend has fantasized about.

McGovern appeared in a number of films in the 21st century, including Woman in Gold, a drama starring Helen Mirren.

McGovern has appeared in several television productions, mostly in the UK. In 1999 and 2000 McGovern played Marguerite St. Just in a BBC television series loosely based on the novel The Scarlet Pimpernel.

On American TV, she appeared in a 2006 episode of Law & Order: Special Victims Unit titled "Harm," in which her character of Dr. Faith Sutton was a psychiatrist accused of complicity in detainee abuse. Her other television work includes Broken Glass (Arthur Miller, 1996); Tales from the Crypt; The Changeling; Tales from Hollywood; the HBO series Men and Women; The Man in the Brooks Brothers Shirt; Shelley Duvall's Faerie Tale Theatre ("Snow White and the Seven Dwarfs"); and If Not for You (CBS 1995, own series).

In May 2007, she played Ellen Doubleday, Daphne du Maurier's paramour, in Daphne, a BBC2 television drama by Amy Jenkins based on Margaret Forster's biography of the author.[8]

In December 2008, McGovern appeared as Dame Celia Westholme in "Appointment with Death", an episode of Agatha Christie's Poirot. In the same year, she appeared in the three-part BBC comedy series Freezing, written by James Wood and directed and co-produced by her husband Simon Curtis. First broadcast on BBC Four, it was also shown on BBC2 in February 2008. McGovern played an American expatriate actress named Elizabeth, living in Chiswick with her publisher husband, played by Hugh Bonneville, and co-starring Tom Hollander as her theatrical agent.

From 2010 to 2015, she portrayed Cora Crawley, Countess of Grantham, wife of Robert Crawley, 7th Earl of Grantham (played by Hugh Bonneville) in the British TV series Downton Abbey.[9]

McGovern is also a singer-songwriter. In 2008 she began fronting the band Sadie and the Hotheads at The Castle pub venue in Portobello Road, London.[10] The band released an album of songs she developed with The Nelson Brothers, who are now part of the band. The album also includes Ron Knights on bass and Rowan Oliver, borrowed from Goldfrapp, as drummer for the recording sessions.[7] Michelle Dockery, who plays McGovern's eldest daughter in Downton Abbey, has occasionally sung with the band.[11]

Roles in New York include:

In her theatre programme CVs (below), McGovern lists her other theatre work in the U.S. as including:

Since moving to London, McGovern's stage work has included:

McGovern was awarded the 2013 Will Award by the Shakespeare Theatre Company.[15]

When she was 23, McGovern was engaged to actor Sean Penn whom she met on the set of Racing with the Moon.[16] In 1992, she married British film director and producer Simon Curtis; the couple have two daughters, Matilda and Grace.[17][18]

Report a problem
Write to Elizabeth McGovern at FanPal • 2022