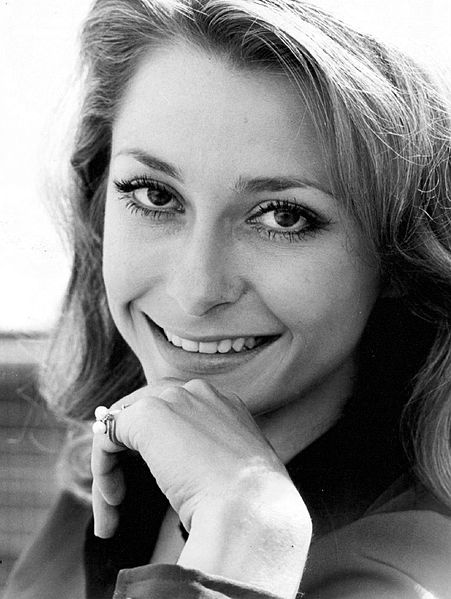 Elizabeth Ashley (born August 30, 1939) is an American actress of theatre, film, and television.[2] She has been nominated for three Tony Awards, winning once in 1962 for Take Her, She's Mine. Ashley was also nominated for the BAFTA and Golden Globe awards for her performance in The Carpetbaggers (1964), and was nominated for an Emmy Award in 1991 for Evening Shade. Elizabeth was a guest on The Tonight Show with Johnny Carson 24 times.

Ashley left Louisiana State University after her freshman year and moved to New York. She studied acting at The Neighborhood Playhouse School of the Theatre there, supporting herself by working as the Jell-O Pudding girl on a television program and as a showroom model.[5]

Ashley won a Tony Award for Best Featured Actress in a Play for Take Her, She's Mine, then later starred as Corie in the original Broadway production of Neil Simon's Barefoot in the Park (1963) and, later, as Maggie in a Broadway revival of Tennessee Williams' Cat on a Hot Tin Roof (1974). She received Tony nominations for both performances.[6] She appeared on Broadway as Dr. Livingstone in Agnes of God (1982) and was a replacement in the role of Mattie Fae during the original Broadway run of August: Osage County.[7]

Having earlier appeared with Burt Reynolds in Paternity in 1981 and as a guest star in his television series B.L. Stryker in 1989, Ashley became a cast member of Reynolds' next television series, Evening Shade, from 1990-1994 as Aunt Frieda Evans.[8] In 1991, this role garnered her an Emmy nomination for Outstanding Supporting Actress in a Comedy Series.[9] She was originally supposed to appear in the 1995 movie Mallrats, playing the governor of New Jersey; however, owing to timing issues, the entire sequence was cut and replaced by a new one.[citation needed]

Ashley had the role of Kate in Sandburg's Lincoln, a six-part dramatization that ran on NBC in the mid-1970s.[8]:926 Her other television appearances include the 1987 miniseries The Two Mrs. Grenvilles, and guest roles in Ben Casey; Route 66; Sam Benedict; Stoney Burke; The Six Million Dollar Man; Family; Miami Vice; Caroline in the City; Mission: Impossible; Murder, She Wrote; Dave's World; Law & Order: Special Victims Unit; Touched by an Angel; The Larry Sanders Show; and Homicide: Life on the Street. She was also featured in 14 episodes of the HBO series Treme as Aunt Mimi.[9]

Ashley's autobiography, entitled Actress: Postcards from the Road, was published in a hardcover edition on June 1, 1978 by M. Evans & Co (now part of the Rowman & Littlefield Publishing Group). A paperback publication followed on October 12, 1979 through Fawcett.[10]

Three times divorced, Ashley's first and second husbands were actors James Farentino and George Peppard.[11] The latter was her leading man in her first movie, The Carpetbaggers (1964); the couple had a son, Christian (born 1968).[1]

When she was 25 years old, Ashley retired from acting "to make a home for my husband ... realize myself as a woman".[12] She resumed her career four years later.[12]