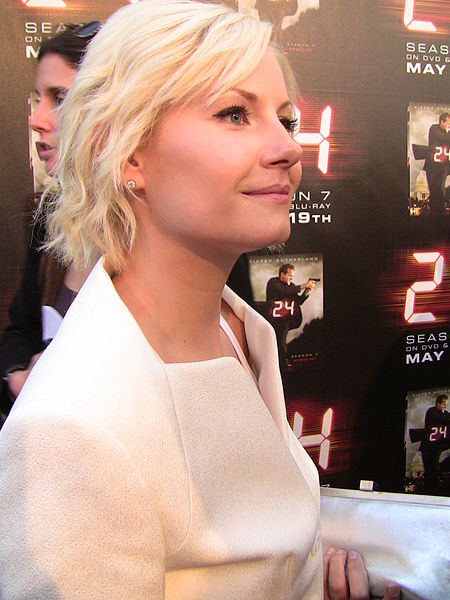 Elisha Ann Cuthbert (born November 30, 1982) is a Canadian actress and model. She became known for playing Kim Bauer in the series 24, Darcie Goldberg in the college comedy Old School, Danielle in the teen comedy film The Girl Next Door, and Carly Jones in the 2005 remake of House of Wax.[1] In 2013, Maxim magazine named her "TV's most beautiful woman".[2]

At the age of 14, Cuthbert made her feature film debut in the 1997 family-drama Dancing on the Moon. Her first major lead role came in the 1998 drama film Airspeed (No Control) alongside Joe Mantegna. In 2001, she starred in the movie Lucky Girl, in which she received her first award, the Gemini Awards, but her career began in earnest in the 2000s when she played Kim Bauer, daughter of Jack Bauer in the action series 24. Subsequently, Cuthbert appeared in the lead role in the films The Quiet (2005) and Captivity (2007).

From 2011 to 2013, Cuthbert starred as Alex Kerkovich in the three seasons of the ABC comedy Happy Endings.[3]

Elisha Ann Cuthbert was born November 30, 1982, in Calgary, Alberta, Canada, the daughter of Patricia, a housewife, and Kevin, an automotive design engineer.[3][4] She grew up in Greenfield Park, Quebec. She also lived in Toronto, Ontario, before moving onto acting. In 2000, she graduated from Centennial Regional High School and moved to Los Angeles at the age of 17.[5]
Read more...

When she was nine, Cuthbert started modelling children's clothing and also became a foot model.[6] She made her first televised appearance as an extra in the horror-themed series for children, Are You Afraid of the Dark?; she later became a regular on the show. Cuthbert co-hosted Popular Mechanics for Kids with Jay Baruchel, filmed in Montreal. Her reporting captured the attention of Hillary Clinton, who invited her to the White House.[7]

Cuthbert landed a role in a feature film in the family drama Dancing on the Moon (1997). She appeared in other Canadian family films and in an airplane thriller, Airspeed. In 2000, Cuthbert co-starred in Believe, a Canadian film with Ricky Mabe. The following year, she starred in the Canadian television movie, Lucky Girl, and was awarded a Gemini Award for her performance.[8]

Soon after her move to Hollywood, she was cast as Kim Bauer, daughter of federal agent Jack Bauer, in the television series 24. She appeared in the show's first three seasons, but not in its fourth; she guest-starred in two episodes in the fifth season. She also reprised her role as Kim Bauer in 24: The Game and again guest-starred in five episodes of the seventh season and in two episodes of the eighth season.

She began her Hollywood film career with small roles in Old School, which grossed $87 million. Her next film, Love Actually, earned $246.4 million worldwide.[9]

Her first break in a major film role was in 2004, The Girl Next Door. She played an ex-porn star, Danielle, opposite Emile Hirsch. She had reservations about the part, but was persuaded by director Luke Greenfield. She researched the role, speaking to adult actresses from Wicked Pictures and Vivid Entertainment.[10] The film was compared to Risky Business,[11][12] although Cuthbert said her character was not directly based on Rebecca De Mornay's. Critics were divided; some praised the film for boldness, others, notably Roger Ebert, called it gimmicky and exploitative.[13][14] Ebert wrote that he saw Cuthbert's character as "quite the most unpleasant character I have seen in some time."[15] The View London said: Cuthbert is surprisingly good, too - aside from being drop dead gorgeous, she also proves herself a capable comic actress in the Cameron Diaz mould.[16] Cuthbert won two nominations for the MTV Movie Awards for Best Kiss and Best Breakthrough Performance.

In her next film, Cuthbert starred with Paris Hilton and Chad Michael Murray in the 2005 remake of the horror film House of Wax. In one scene, her character attempted to open her mouth while her lips were sealed with glue. For realism, she used Superglue over prosthetics.[17] House of Wax was largely panned, critics citing a range of flaws. It was called "notable for having some of the most moronic protagonists ever to populate a horror film," though of those characters, critics tended to think Cuthbert "fares the best." Though it received negative reviews the film was a box office success, which grossed $70 million worldwide.[18] The Houston Chronicle cited Cuthbert as an exception.[19] Mick LaSalle of the San Francisco Chronicle said of the film, "Elisha Cuthbert's matter-of-fact, likable quality helps. Seeing her turn into wax would be as bad as seeing that happen to Glenda Farrell (the star of the 1933 version)."[20] The Movie said: "The performances are always professional and understated in their believable cogency, particularly Cuthbert, a talented, beautiful young actress who has proven time and again just what a multilayered and promising future she has ahead of her. Cuthbert digs into the role of Carly with strength, determination, and horrified realism; you believe as you watch her that she is going through these things and forget all about the actor playing the part, which is the biggest compliment of all.[21] Sergio Leone of Filmjerk.com said: " Hilton ... only plays her known personality in the film. She's overshadowed by the strong work from the rest of the cast, notably Chad Michael Murray and especially Elisha Cuthbert, who gives the film a strong dose of enthusiasm with her Jamie Lee Curtis esque performance."[22] Cuthbert was nominated at Teen Choice Awards in two categories Choice Movie: Actress - Action / Adventure / Thriller and Choice Movie: Rumble.

Cuthbert at a screening for the 24 season 7 finale

Cuthbert's next film was the indie film The Quiet. She was co-star and co-producer. She played Nina, a temperamental 17-year-old cheerleader who suffers sexual abuse by her father. Cuthbert looked to her younger cousin as inspiration for how to play a teenager.[23] The Quiet, distributed by Sony Pictures Classics, premiered at the 2005 Toronto International Film Festival and received a limited release in Los Angeles and New York City on August 25, 2006,[24] before expanding regionally in the US on September 1. Cuthbert initially wanted to play role of the silent Dot, but director Jamie Babbit instead cast Camilla Belle in that part[25] after Thora Birch pulled out.[26] Babbit reasoned that "To me, Dot has to be someone you could believe would be invisible in high school. You look at Elisha, this beautiful woman with the most perfect body you've ever seen, and you think, there's no high school in America where this girl could be invisible. No matter how much hair and makeup I do, it's not going to happen." The Daily Californian conceded that "Despite the plot's failings, Cuthbert does a convincing job in her role, exuding an outer shell so tough that when her inner, softer layers emerge, it's a natural change of character.[27] Empire Movies agreed, commenting that "this is Elisha Cuthbert's best film performance to date. Cuthbert's Nina has the majority of the most graphic and disturbing dialogue in the film, especially during one particular lunchroom scene where the camera is close up on Cuthbert and Belle's faces."[28]

Cuthbert appeared in the music video for Weezer's "Perfect Situation" in early 2006, playing the group's fictional original singer who threw a tantrum that led to Rivers Cuomo, the roadie, becoming frontman of the band.[29] She also had a small role in Paris Hilton's music video for the song "Nothing in This World".[30]

In 2007, Cuthbert appeared in Captivity, a thriller centered on a fashion model taunted by a psychopath who has imprisoned her in a cellar,[31][32] a role for which she was nominated for a Razzie award as Worst Actress[33] and Teen Choice Awards for Choice Movie Actress: Horror/Thriller.[34] The film grossed $10.9 million at the box office.[35] The critic Stephen Whitty of the Newark Star-Ledger said, "When, in the last few minutes, Cuthbert finally slipped her bonds and began looking for her tormentors, I knew exactly how she felt."[36] The View London published: "The Worst Cuthbert struggles to make her character sympathetic because the script doesn't give her anything to work with, while Daniel Gillies is too creepy-looking to convince as a potential love interest."[37]

In He Was a Quiet Man, Cuthbert played Vanessa, a quadriplegic, starring with Christian Slater. The film was in limited release in 2007, and it was released on DVD in early 2008.[38]

In 2008, Cuthbert appeared in My Sassy Girl, a remake of a Korean film, starring with Jesse Bradford. Her next film was the family comedy, The Six Wives of Henry Lefay, with Tim Allen, in which she played his daughter. She starred in the Canadian miniseries Guns. She was a judge in season two, episode two of Project Runway Canada, in which designers were challenged to create a "party dress" for her.[39]

Cuthbert reprised her character Kim Bauer in the seventh season of 24 for five episodes.[40] She was also to star in the CBS drama pilot Ny-Lon, playing a New York literacy teacher/record-store clerk who embarks on a transatlantic romance with a London stockbroker. The project, based on a British series starring Rashida Jones and Stephen Moyer, was canceled.[41]

In December 2009, ABC said Cuthbert had joined the cast of The Forgotten in a recurring role as Maxine Denver, a Chicago professional.[42] It was expected for Cuthbert to play the role of Trixie in sports action- comedy film Speed Racer (2008), but Christina Ricci was eventually chosen.[43]

From April 2011 to May 2013, Cuthbert starred as Alex Kerkovich for three seasons on the ABC ensemble comedy Happy Endings alongside Eliza Coupe, Zachary Knighton, Adam Pally, Damon Wayans Jr. and Casey Wilson.[44] Despite critical acclaim and having a cult following, the show was cancelled by ABC after the conclusion of its third season on May 3, 2013. Cuthbert was nominated for the Online Film & Television Association Award in 2012 and 2013 in the category of "Best Cast in a Comedy Series"[45] and TV Guide Awards for Favorite Cast, the series was also nominated for 28 other awards including the Satellite Awards for Best Series comedy television or music. Cuthbert's performance also received positive reviews from critics. In 2013, she was regarded as a promising contender for an Emmy Award in the Outstanding Supporting Actress in a Comedy Series category,[46][47][48][49] though she did not receive a nomination.

In 2012, Cuthbert was host of the American Music Awards.[50] In October 2012, she appeared in The Gaslight Anthem's music video "Here Comes My Man", playing the girlfriend of a man who mistreats her, until she imagines a romantic relationship with a character in a film and chooses to end her real relationship.[51]

In February 2014, Cuthbert signed to play the female lead role in Liz Feldman and Ellen DeGeneres' new NBC sitcom pilot One Big Happy. Cuthbert stars as Lizzy, a lesbian who gets pregnant just as her straight male best friend Luke (played by Nick Zano) meets and marries the love of his life, Prudence.[53] Six episodes of the show were ordered on May 9, 2014, and it debuted mid-season in early 2015. The series was canceled after one season.[54]

In 2015, Cuthbert joined Seann William Scott in a sequel to the 2011 comedy Goon. The new film, titled Goon: Last of the Enforcers, went into production in June in Toronto. Liev Schreiber and Alison Pill will also reprise their roles from the first film.[55]

In September 2015, Netflix announced Cuthbert would join the cast of The Ranch, a comedy series.[56]

Cuthbert has two younger siblings, Jonathan and Lee-Ann, and enjoys painting,[83] is an ice hockey fan and Los Angeles Kings season-ticket holder. In 2005, she maintained a blog on the NHL website, though she did not post for most of the season.[84][85]

Cuthbert and hockey star Dion Phaneuf, then the Captain of the Toronto Maple Leafs, announced their engagement in September 2012,[86][87] and they married on July 6, 2013 at St. James Catholic Church in Summerfield, Prince Edward Island.[88] Living in Ottawa during the hockey season, Cuthbert and Phaneuf spend their summers at Phaneuf's waterfront estate outside New London, Prince Edward Island, in his parents' home province.[88][89][90]