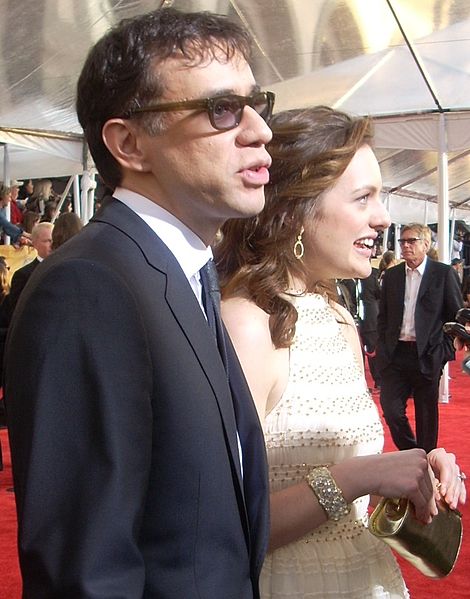 Elisabeth Singleton Moss[1] (born July 24, 1982)[2] is an American actor. She is known for her roles as Zoey Bartlet, the youngest daughter of President Josiah Bartlet, on the NBC television series The West Wing (1999-2006); Peggy Olson, secretary-turned-copywriter, on the AMC series Mad Men (2007-2015), which earned her six Emmy Awards nominations and a Golden Globe nomination; Det. Robin Griffin in the BBC miniseries Top of the Lake (2013, 2017), which won her a Golden Globe for Best Actress in a Miniseries or TV Film; and Offred on the Hulu series The Handmaid's Tale,[3] for which she won the Primetime Emmy Award for Outstanding Lead Actress in a Drama Series and the Primetime Emmy Award for Outstanding Drama Series as a producer.

Moss is also known for her work in the films Girl, Interrupted; Virgin; Listen Up Philip; The One I Love; Truth; Queen of Earth; and The Square. Her theatre work includes Broadway productions of David Mamet's Speed the Plow and Wendy Wasserstein's The Heidi Chronicles, the latter for which she was nominated for the Tony Award for Best Actress in a Play. She has also appeared in the West End production of Lillian Hellman's The Children's Hour. For her roles in The West Wing, Mad Men, Top of the Lake, and The Handmaid's Tale, Moss was named "The Queen of Peak TV" by Vulture.[4]

Elisabeth Moss was born and raised in Los Angeles, California, the daughter of Ron and Linda Moss, both of whom were musicians.[5] Moss has one younger brother.[6] She was raised a Scientologist.[7] Her father is British.[8] Her mother is of part Swedish descent.[9]

Initially, Moss had aspirations of becoming a professional dancer.[6] In her adolescence, she traveled to New York City to study ballet at the School of American Ballet, after which she studied with Suzanne Farrell at the Kennedy Center in Washington, D.C.[5] Moss continued to study dance throughout her teenage years, but began obtaining acting roles as well. In order to manage her education and career, she began homeschooling, and graduated in 1999 at age sixteen.[5]

Moss's first screen role was in 1990, when she appeared in the NBC miniseries Lucky/Chances.[10] From 1992 until 1995, Moss appeared as Cynthia Parks in seven episodes of the TV series Picket Fences.[10] She provided the voice of Holly DeCarlo, a main character in the TV special Frosty Returns (1992) and of Michelle in the animated film Once Upon a Forest (1993). She appeared in the television remake of the 1993 film Gypsy and played Harvey Keitel's younger daughter in the film Imaginary Crimes (1994). The following year, she appeared in the remake of the Walt Disney Pictures film Escape to Witch Mountain (1995) and played a young Ashley Judd in the TV-movie biopic Love Can Build A Bridge (1995).[10] She also had a supporting role in the drama Separate Lives (1995) opposite Jim Belushi and Linda Hamilton, and a minor part in the black comedy The Last Supper (1995).[11] Moss also again provided voice work, for the animated series Freakazoid! and the television film It's Spring Training, Charlie Brown! (1996).

Beginning 1999, Moss portrayed the recurring role of Zoey Bartlet in the White House television drama The West Wing, playing the daughter of Martin Sheen and Stockard Channing; she would portray the character until the series finale in 2006.[10] Moss's character became integral to the fourth season of the show; in a retrospective on the series, The Atlantic noted: "Aaron Sorkin made the centerpiece of the explosive fourth-season finale where he basically engineered the most insane cliffhanger possible. It required Zoey to be a bit of a pain with her fancy French boyfriend, but Moss always made her relatable, even when the plot required otherwise."[12]

In 1999, she had a supporting role as a patient in a mental institution in James Mangold's Girl, Interrupted, opposite Winona Ryder and Angelina Jolie,[10] and a minor part in the drama Anywhere But Here. That same year, she had a small role as Katie Brockett in the movie Mumford (1999), playing the daughter of a woman with a shopping addiction.

Moss went on to do Heart of America and three other films in 2004. That year, she also made the movie Virgin,[10] for which she was nominated for a 2004 Independent Spirit Award. Moss also had a supporting part in Ron Howard's Western thriller The Missing (2003).[13]

Moss had a supporting role in the 2005-2006 horror series Invasion,[10] and appeared in television again on a 2007 episode of Grey's Anatomy entitled "My Favorite Mistake",[14] and on the series Medium opposite Patricia Arquette. She also appeared in Mary Lambert's 2007 horror film The Attic, and the independent drama Day Zero (2007).

In 2007, she was cast as Peggy Olson, secretary-turned-copywriter in the AMC dramatic series Mad Men. Between 2009 and the series' final season in 2015, Moss was nominated for five Emmy awards for the role[15] for Outstanding Lead Actress in a Drama Series.[16][17] In 2010, she was nominated for the Outstanding Supporting Actress Emmy.[18] Reflecting on her casting in the series, Moss recalled: "I auditioned . There were scripts for two pilots that everyone were talking about at the time that were really good, and Mad Men was one of them."[19]

While a series regular on Mad Men, Moss made her Broadway debut in October 2008, playing the role of Karen in the 20th Anniversary revival of Speed-the-Plow by David Mamet.[20] She then appeared in the comedy film Did You Hear About the Morgans? (2009), playing Sarah Jessica Parker's assistant,[21] followed by a part in the comedy Get Him to the Greek (2010) opposite Jonah Hill.

Moss's West End debut was as Martha Dobie in Lillian Hellman's play The Children's Hour, which opened at The Comedy Theatre, London on January 22, 2011.[22] In 2012, she was cast as Galatea Dunkel in the independent drama On the Road, based on the Jack Kerouac novel of the same name.[11]

Moss played detective Robin Griffin in the 2013 Sundance Channel miniseries Top of the Lake, a co-production by the Sundance Channel, the UK's BBC Two and Australia's UKTV, written and directed by Oscar-winner Jane Campion.[23][24] For her role, Moss received the Golden Globe Award for Best Actress - Miniseries or Television Film. The following year, Moss starred in the independent film Listen Up Philip (2014), her first collaboration with writer-director Alex Ross Perry.[11]

After production on Mad Men had wrapped, Moss collaborated again with Alex Ross Perry, starring in Queen of Earth (2015), a psychological thriller opposite Katherine Waterston and Patrick Fugit, in which she plays a mentally unstable woman who unravels at a vacation home in the company of her close friends. She was also cast in a supporting part in the British dystopian drama High-Rise (2015), opposite Tom Hiddleston and Sienna Miller.[29]

Moss appeared in the Chuck Wepner biopic Chuck (2016), opposite Liev Schreiber.[30] In 2017, she appeared in Mad to Be Normal, a biopic of the Scottish psychiatrist R. D. Laing.[31] She is set to star in The Seagull, an adaptation of Anton Chekhov's play of the same name.

In 2017, Moss began playing Offred in the Hulu series The Handmaid's Tale, for which she received critical acclaim and a Primetime Emmy Award for Outstanding Lead Actress in a Drama Series.[32] The second season of Top of the Lake, consisting of six episodes, premiered at the Cannes Film Festival in May 2017. Moss reprised her role as Robin Griffin in this season which is set in Sydney, Australia.[33][34]

Half British on her father's side, Moss also holds citizenship of the United Kingdom.[40]

Moss practices Scientology[41] and identifies as a feminist.[42] After a fan questioned whether her role in the Hulu series The Handmaid's Tale made her think about her involvement with the Church of Scientology, Moss defended her beliefs on Instagram, writing that the idea that Gilead in the series and Scientology "both believe that all outside sources are wrong or evil," as the fan describes, is "actually not true at all." She continued, "Religious freedom and tolerance and understanding the truth and equal rights for every race, religion and creed are extremely important to me."[43]

Main article: List of awards and nominations received by Elisabeth Moss
Report a problem
Get in touch with Elisabeth Moss at FanPal • 2021