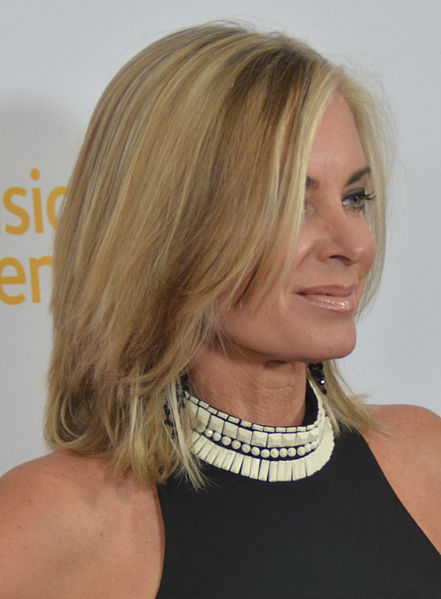 Eileen Marie Davidson[1] (born June 15, 1959) is an American actress, reality star, author and former model, best known for her performances in television soap operas. Davidson is best known for her roles in soap operas as Kristen DiMera on NBC's Days of Our Lives, and Ashley Abbott on CBS's The Young and the Restless and The Bold and the Beautiful.

In 2014, for her role in Days of Our Lives, Davidson was awarded a Daytime Emmy Award for Outstanding Lead Actress in a Drama Series, the second actress to win a Daytime Emmy Award in the category of "Lead Actress" for the soap;[2] and in 2018 she won the award again for her role on The Young and the Restless.[3] Davidson also starred in the film The House on Sorority Row (1983), had a leading role in the short-lived CBS crime series Broken Badges (1990-91), and wrote a number of mystery novels in the 2000s. In 2014, Davidson joined the cast of Bravo reality television series The Real Housewives of Beverly Hills with record salary of $750,000 per season.[4]

Davidson, the youngest of six children, was born in Artesia, California to Charlotte (1922-2016), a homemaker, and Richard Davidson (1915-1981), an airplane parts manufacturer. She was raised Roman Catholic.[5][6] She attended St. Paul High School in Santa Fe Springs, California.[7]

Davidson started her career as a model in Mexico City and California, eventually adding commercials and print work in Europe. Her roommate had recommended that she take acting classes and she trained at the Staircase Theater.

Davidson originated the role of Ashley Abbott on The Young and the Restless in March 1982, beating out more than 100 candidates.[6] The character of Ashley became a front-burner character, and Davidson became an integral part of the show. She quit the show in December 1988 and the producers took her recommendation of hiring a look-alike actress named Brenda Epperson Doumani, whom Davidson had discovered waiting tables at a charity function. Davidson also appeared in several films during the 1980s, including a main role in the slasher film The House on Sorority Row (1983), and Easy Wheels (1989), opposite Ted Raimi.

Davidson then appeared in primetime television, but her show, Broken Badges (1990-1991), was canceled.[8] She returned to daytime when she assumed the role of Kelly Capwell on Santa Barbara from November 1991 until the soap's cancelation in January 1993. She next appeared as Kristen Blake on Days of Our Lives beginning in May 1993. As originally conceived, Kristen was a heroine, who had an Achilles' heel in that the show's supervillain, Stefano, had raised her after the death of her parents. James E. Reilly, who assumed head writing reins in 1993, began to make Kristen more of a villainess. Reilly eventually developed an outrageous second role for Davidson, having her play Susan Banks, a Kristen look-alike. Reilly eventually penned three more roles for Davidson (Sister Mary Moira, Thomas, and Penelope). Her character, Kristen, intended to keep her other character, Susan, prisoner on an island, but Susan ultimately prevailed and Kristen remained on the island until she returned to Salem in 2012. All other related characters were last seen in May 1998. Davidson's five roles earned her a Daytime Emmy nomination for Outstanding Lead Actress in 1998.

Davidson at the 2014 Daytime Emmy Awards.

After she was fired from The Young and the Restless but before being cast in The Bold and the Beautiful, her niece Devon Martt, a fashion designer, approached her about designing clothes together.

Davidson co-wrote her first novel with author Robert J. Randisi, a mystery set in the soap opera world titled Death in Daytime, released in October 2008. She followed it up with three sequels: Dial Emmy for Murder (2009), Diva Las Vegas (2010), and Swinging in the Rain (2011).[12]

In July 2008, Eileen was downgraded to recurring status at The Bold and the Beautiful. She returned to The Young and the Restless full-time as Ashley on September 26, 2008. In 2012, Nelson Branco announced that Sony Pictures Entertainment wanted Davidson on both The Young and the Restless and Days of Our Lives, but that Y&R would not share the actress, leading Sony to terminate her contract with them. Thus, it was announced that Davidson would reprise her role as Kristen Blake DiMera on Days of Our Lives.[13]

Davidson made a brief appearance on The Young and the Restless in February 2013 for the soap's 40th anniversary.[14] In July 2013, it was announced that Davidson made the decision to leave Days of Our Lives after a year as Kristen.[15] Davidson exited the role on-screen on November 13, 2013.[16] In late November, it was confirmed that Davidson would return for an episode scheduled to air on December 3, 2013.[17]

On January 28, 2014, it was announced that Davidson would return to the role of Kristen DiMera in the summer of 2014.[18] On May 1, 2014, it was formally announced that Davidson was nominated for a Daytime Emmy Award in the category of Outstanding Lead Actress In A Drama Series for Days of Our Lives. It's her third Daytime Emmy Award nomination, her second for Days. She won the award on June 22, 2014.[19]

Davidson has been married three times, her first being to actor Christopher Mayer from 1985-86. Her second husband was General Hospital, Port Charles and As the World Turns actor Jon Lindstrom, to whom she was married from 1997 to 2000. Mayer and Lindstrom were both stars of the TV series Santa Barbara, a show on which Davidson also spent two years. Neither appeared on the show at the same time. Since 2003, Davidson has been married to actor, former tennis professional and World Poker Tour commentator Vincent Van Patten. They have a son. The pair met in 2000, when Van Patten briefly appeared as Christian, Ashley's "boyfriend" during a cruise, on The Young and the Restless.[26]

Davidson collaborated with Robert J. Randisi on all the novels listed.